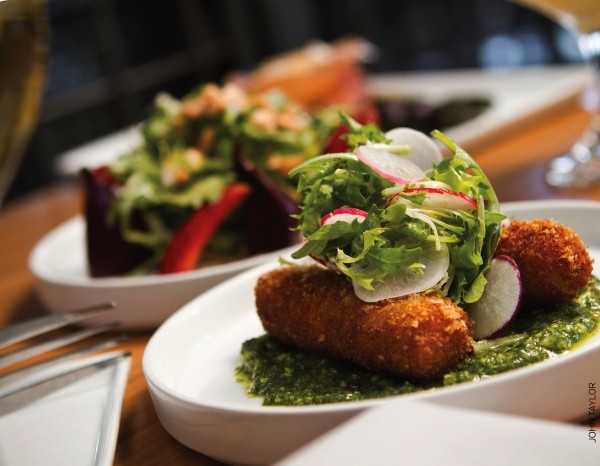 Tapas are, of course, associated mainly with Spain. But the notion of nibbling on appetizer-size foods and small bites is common to many cuisines. China has its dim sum, and there is mezze in the Middle East and Greece. There’s a type of tapa eaten in Argentina called picada, Korea has anju, Venetians snack on cicchetti and there’s antipasti all over Italy, as well as bocaditos in Mexico. Snacking seems to be a near-universal mode of eating.


In Spain, it’s common for people to eat dinner anytime from 9 to 11 p.m., or even later. Therefore, it’s also typical to gather for tapas after school or work, to mingle and nosh a bit before a late dinner. When I lived in Seville, I’d often accompany my parents to tapas bars, where my dad would order small glasses of beer called cañas. Usually, tapas were served free with drink orders—often just a smattering of fat Sevillian olives called manzanilla, two or three grilled shrimp, a piece of Spanish tortilla, a few fried puntillas (cuttlefish) and so on. Today, entire restaurants in Spain are dedicated to tapas, and tapas have become both a cuisine and a culture there.


I mention this because Salt Lake City has a nifty new tapas restaurant, Finca, which, in my opinion, is the most authentic so far to open in our state. Some may disagree. I’ve heard more than one person complain that they don’t like the contemporary, slick look of Finca—that it doesn’t look like a real tapas eatery. Well, all I can say is that I’ve seen every model and make of tapas bar and restaurant in Spain, from cozy little dives with bullfight posters on the walls, to eye-popping, modernist spots like Seville’s Boreas restaurant. Unlike the classic French bistro or brasserie, there really isn’t such a thing as a prototypical tapas joint.


Finca—the creation of Pago owner Scott Evans—is definitely of the moment and not an ode to the past, at least in appearance. The seatbacks in Finca’s booths/banquets come from recycled iron, the walls are made of sugarcane, tables are bamboo and the grill and plancha are fueled with old-fashioned wood (there’s a huge stack of it in the middle of the dining room). Evans tried to use as much recycled material in building Finca and to create as small a carbon footprint as possible. So, no—this isn’t your padre’s tapas bar.


The cuisine, however, is more traditional than you might expect. Evans has spent a good deal of time in Spain, researching Spanish cuisine and wines, and the Finca results are impressive. Chef Phelix Gardner is really hitting some high notes, right out of the box. Take, for example, something as simple as the grilled asparagus ($8). It’s a handful of perfectly cooked spears—nicely charred on the wood-fired grill—topped with a Spanish ham similar to prosciutto, toasted bread crumbs and, the best part, a perfectly poached egg. Simple, but spectacular.


The menu at Finca is divided into cold tapas (frias), hot tapas (calientes) and larger, entree-size dishes called raciones. All of the wines are Spanish. I really like the simplicity of the menu; there are a half-dozen or so cold tapas, a dozen hot, and then a half-dozen (depending on daily specials) raciones. It’s a manageable menu that doesn’t overwhelm with choices, similar to the smartly conceived menu at Pago. It also means that since there aren’t 75 dishes to choose from, the kitchen can really focus. There isn’t a single menu item that I’ve tried at Finca—and I’ve tried most of them—that I didn’t like or even love. It’s an impressive feat for a restaurant that’s been open a mere two months.


The orange salad ($5) spiked with cumin, mint and accompanied by Marcona almonds and onion is a refreshing treat on a warm summer day, perhaps out on the Finca patio. I also delighted in the plump, juicy, steamed black mussels (about 10 of them, $9), served in a heady broth with diced Spanish chorizo. My wife, who gets cranky if bread isn’t served with meals, especially appreciated the offer of grilled bread alongside to soak up that silky seafood broth. Shrimp ($10) grilled on the plancha and served with tiny, crispy garlic chips was classically Spanish, as were the ridiculously delicious croquetas ($6), which were a pair of crispy, deep-fried croquettes filled with rich béchamel and Spanish ham.


During one dinner, a special of the evening was cubed, grilled pork belly on skewers with a mint- and cumin-infused pesto. I really hope Gardner decides to make this a permanent menu item; it was outstanding. So is another excellent tapa—one that makes a great side dish for a racione—the ethereal Brussels sprouts ($6), which are bathed in a rich, bacon-sherry cream sauce. OMG, you’ve never tasted Brussels sprouts as elegant as these.


Carne de asador ($20) is an entree-size dish of grilled, sliced, medium-rare bavette steak topped with a classic romesco sauce, accompanied by braised kale and phenomenal roasted potatoes with paprika and garlic aioli on the side. I’d order the steak just to get those spuds. Another hearty racione is a cassoulet-style dish made with perfectly cooked (firm, not mushy) white beans, housemade sausage, lamb breast and lamb belly ($15). The only glitch—and I mean the only glitch—I was able to find at Finca was an evening grilled snapper special. The fish fillet was wonderful, topped with a yummy sorrel pesto. But no sides. No accompaniments. Just a piece of fish for $22. WTF?


One other note worth mentioning: There have been noise complaints. And, yes, Finca is full of hard surfaces that reflect noise. It’s a bustling place with lots of energy. If you’re looking for solitude, it’d be best to eat elsewhere. But you’ll be missing out on one of Utah’s most exciting new restaurants, with exceptional service, not to mention a killer selection of Spanish wines and clever cocktails.