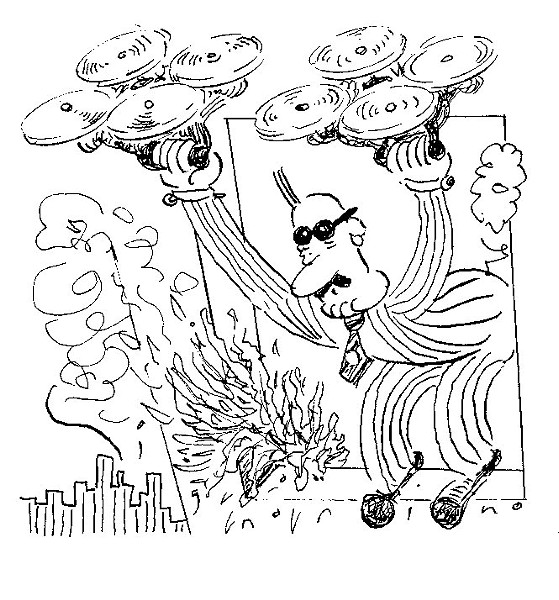 We're told not to use the elevators if there's a fire. But how are people expected to evacuate from skyscrapers? Does everyone really just take the stairs? I'm disabled, and I wouldn't want someone risking their life carrying me down so many flights. Couldn't they connect the tall buildings like hospitals do, so you could evacuate horizontally?

One World Trade Center, nicknamed the Freedom Tower, reaches 94 stories into the sky. That's 16 floors fewer than the ill-fated skyscrapers that once occupied the same site, but still, clambering down its 2,226 steps from top to bottom would be a schlep under ordinary circumstances, let alone with lives at stake. You're not the first to suspect there must be a better way to clear tall buildings during a calamity than trooping every occupant down the staircases. In the 15 years since the towers fell, engineers have hunkered down to rethink building-safety design and emergency evacuation procedures.

Conducting folks out of fiery high-rises through enclosed overhead walkways doesn't seem to have come up, though. Many of us have been wheeled or gurneyed through the hospital skybridges you mention, of course, and some cities, including Minneapolis, Des Moines and Calgary, have run with this idea, refashioning their downtowns into human-size Habitrails by linking buildings into miles-long skyway networks. These passages weren't built as safety features, but rather for the convenience and comfort of shoppers and office workers in wintertime, and they're typically only a couple stories above street level—not much help if you're fleeing the 40th floor.

Skyways aren't notably cheap—connecting a new football stadium to the existing Minneapolis system recently cost more than $10 million—and they're out of favor with urbanists, who fret about foot traffic being diverted indoors, thus robbing city streets of their vibrancy. More to our point, they also might not be the safest structures in an emergency: For one thing, as Minneapolis discovered during a 1982 department-store fire, they channel smoke from a burning building to its neighbors all too effectively.

What, then, might replace a long trek downstairs? Hoping perhaps to capitalize on fears that official procedures are unreliable, canny entrepreneurs are now marketing individual emergency-response gear to potential evacuees. Reps for SkySaver, an automatic rappelling backpack originally intended for urban-combat use, insist it could double as a "personal rescue device." You clip your cable to something solid and climb out the window, and it slowly lowers you to the ground—as long as the ground isn't more than 260 feet away, 'cause that's how much cable you've got.

If jumping sounds better to you than dangling, the people selling the SOS Parachute claim their product is safe to use from just 11 stories up, barely 100 feet in the air. That's too close to the ground for even an experienced BASE jumper, and far lower than most paratroopers would be happy with. Remember, too, that city airspace can be both densely built and windy: One unexpected gust could slam you against a wall—or into your co-workers, should any of them have the same bright idea about chuting to safety.

Then again, you might instead consider the counterintuitive notion of heading up the stairs, at least if you work in certain cities, like Los Angeles, where for decades all new skyscrapers had to be topped with helipads. (The requirement was scrapped two years ago.) Even if your building's roof is suitable for landing, heat, flames and wind make a helicopter rescue tricky, and emergency personnel would rather avoid such a feat if possible. Safety experts in less copter-forward cities than L.A. advise against the roof option—heat rises, after all, and the top of a structure being consumed by flames is hardly a hospitable place to wait around on the off chance a helicopter might happen along.

But what if, despite all we've been told, elevators turn out to be the best way out of a burning building after all? That's the theory behind occupant-evacuation elevators, designed to address the safety concerns that once made elevators the No. 1 way not to leave a building during a fire. In skyscrapers built on this principle, you'd evacuate by first taking the stairs to one of several sky-lobby floors—the ones where under non-emergency conditions passengers transfer from express to local elevators. (You might also get to the sky lobby via special shuttle elevators from designated "refuge floors" throughout the building.) The express car you eventually board contains drainage systems to prevent flooding and is protected from smoke by the pressurized shaft it travels through. The days of elevators returning to the ground floor and remaining disabled throughout a disaster may be numbered.

So let's forget parachutes and copters and futuristic passageways zig-zagging across the skyline—building safety is one field where disruption, to use the loathsome tech jargon, matters less than incremental improvement. Engineers seem to have chosen to fine-tune older concepts rather than chase eye-popping new ones, and that makes sense: In case of fire, you want your evacuation to be as dull and uneventful as possible. CW