UFA Board considers recouping bonuses paid to former chiefs and turning investigation over to law enforcement. 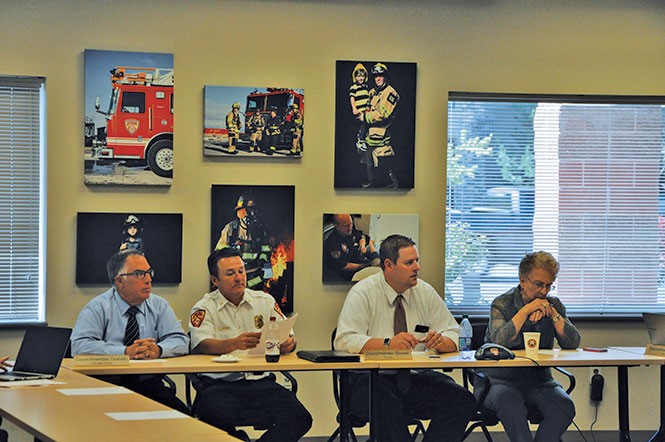 A week after the Utah State Auditor issued an exhaustive audit documenting the misdeeds of former fire chiefs at the Unified Fire Authority, the board that oversees the state's largest firefighting agency is weighing whether it will seek criminal and civil action against its former employees.

The 68-page audit outlined a pattern of abuse and alleged fraud by former UFA chief and current Salt Lake County Councilman Michael Jensen and his former deputy chief, Gaylord Scott. Both men resigned last summer after a City Weekly investigation uncovered hundreds of thousands of dollars of bonuses and other benefits the chiefs, and other top lieutenants, were receiving.

Auditors also urged the UFA board—made up of elected leaders from Salt Lake County and the other cities and towns the fire department serves—to seek criminal charges against the men and recoup the lavish bonuses, as well as taxpayer money that showered the men with abundant electronic devices and junkets to various cities across the country for work that, in one case, was an excuse to attend baseball games.

To that end, the board on Monday announced it intends to hold a special meeting Thursday, Jan. 26, to discuss the audit and its recommendations.

As the board moves into what it hopes is a new era at the fire department—a key aspect of which took place when it hired Dan Petersen, a fire chief from Medford, Ore.—the board itself is grappling with its own trials in attempting to identify its role in the events that sparked the audit.

In addition to these failures, the audit cites former chief Jensen's other job as a county councilman (Jensen was re-elected in November to his fifth four-year term), as having a chilling influence over some board members who might have feared him.

The audit says that board members were reluctant to question Jensen because it could result in County Council decisions that could negatively impact board members' cities.

"We believe that most board members had an attitude of 'go along to get along,'" the audit says. "We did not identify any threatened or actual punitive action on the part of the former chief."

As of press time, neither Jensen nor Scott responded to requests for comment.

Eagle Mountain Mayor Chris Pengra, whose community is served by UFA firefighters and paramedics and who is the UFA board spokesman, says the board is the entity that should have prevented the misuse of taxpayer funds outlined in the audit.

However, he notes that auditors uncovered examples where UFA policies were altered by the chief and his deputy chief to suit their needs—instances where no policy-making decisions from the board could have thwarted the chiefs' behavior.

"We offer a sincere apology to the public for any part we played in not preventing those things from happening," Pengra says. "There are clear examples where policies were unilaterally changed to authorize inappropriate action by Jensen and Scott. I don't think any policy or process was ever going to be successful in bringing those things to light."

Because the men stepped down amid concerns regarding the propriety of the bonuses, as well as potential misuse of public funds in regard to travel, gas card and credit card use, the auditors suggest that the board not only recoup the bonuses from the two former chiefs, but also the severance packages. The audit also indicates that the board had ample reasons to fire Scott and Jensen—an action that would have voided any severance agreement.

"With suspicions of improper activity, and given the information available to the board at that time, we question why the board did not proceed with termination for cause," the audit says.

State Auditor John Dougall says that many board members clearly trusted Jensen, and that "for some, there was also a level of fear."

"It was easy just to bite your tongue," he says. "You had a board that was OK being left in the dark and a former chief who took advantage of that."

City Weekly's investigation—compiled using public documents that specified the chiefs' use of taxpayer-funded gas and credit cards—revealed that Scott had a penchant for steak dinners, Apple devices and, especially, driving a UFA-provided SUV.

In a five-year span, Scott spent $28,800 on gasoline and another $110,440 on miscellaneous purchases, including a pair of firearms that credit card receipts show were once destined to be auctioned off, but remained in Scott's care instead.

When it came to Scott and Jensen's excessive purchases of electronics, auditors found that the men also employed these devices for personal use. Although Jensen and Scott apparently attempted to wipe the devices clean of any data, a forensic team restored the information, revealing that Jensen had used his UFA computer for a family business and his political campaigns.

As the UFA board contemplates whether or not to seek hundreds of thousands of dollars in reimbursements from Jensen and Scott, the audit has also sparked interest from Salt Lake County Auditor Scott Tingley, who announced last week that he intends to audit expenses by all nine of the Salt Lake County Council members and their staffs.

As the allegations of wrongdoing mounted against Jensen and Scott in recent months, UFA board members, as well as the man put in place to help mend the organization, UFA Assistant Chief Mike Watson, emphasized that the rancor surrounding the organization's former leaders shouldn't overshadow the great work done each day by the hundreds of UFA firefighters and paramedics.

With the audits now concluded and a new chief at the helm, Watson, who has reverted back to an assistant chief after a couple of months acting as interim chief, says UFA's many employees can at last begin to move forward.

"At some point, our own employees need to see that we are moving forward," Watson says. "I'm just glad our folks can see we have a new leader."

Scanning the long list of alleged inappropriate behavior by Jensen and Scott outlined in neat bullet points and on official state of Utah letterhead, Pengra says, was "deeply troubling."

"Seeing all of the misdeeds catalogued in one document was appalling," he says.