Firelei Baez explores the connections among historical struggles for identity 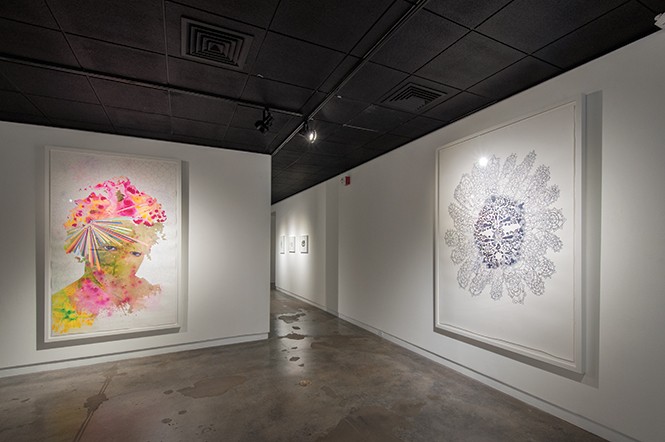 The legacy of social movements around the world in the past century shows that resistance to systems of power can take many different forms, but they all tend to have certain things in common. Born in the Dominican Republic, Brooklyn, N.Y.-based artist Firelei Baez uses her large-scale works on paper to demonstrate parallels between experiences of black women in 18th-century Louisiana and the Latin American azabache movement, with its genesis in Cuba. Baez's painting series Patterns of Resistance will be on display at the Utah Museum of Contemporary Art through mid-January.

The exhibition title itself suggests that resistance follows familiar patterns. And, as opposed to predominantly male perspectives and aesthetics that still persist in the art world, her art not only depicts women as subject matter but exalts their existence—not as objects of masculine desire, but as figures of empowerment. Baez says the title was inspired by lineages of black resistance in the Caribbean and how it then influenced other social movements around the world. In Patterns of Resistance, Baez says she "merged past and potential histories to illuminate obscured narratives of identity, primarily focusing on female figures and their subjectivities."

The paintings and drawings of textiles, hair designs and body ornaments illustrate the link between "traditionally loaded symbols [and] individual human gestures, aiming to reveal new emblems of power and invoke disparate patterns of resistance within the African diaspora in the rich and intricate compositions," she writes. As elaborated in her work, these patterns can be extremely subtle or somewhat surreptitious but always express a dramatic viewpoint.

Baez's work is conceptually multi-faceted and technically very rigorous. Her meticulous studio practice bears fruit in wondrously complex compositions. She incorporates linear detail and resonant color and demonstrates an ability to seduce the eye with layers of textures, symbols and artistic gestures, suggesting a process of endless discovery. The addition of humor amid profound tragedy leavens the scope of her work.

The paintings often utilize textile patterns, reminiscent of the floral motifs of garments worn by laborers and include symbols from the U.S. progressive left in the 1960s, such as the "clenched fist" used by the Black Panther party and other groups. Known in Latin America as the azabache, the symbol is both visually and thematically the centerpiece of the show. A black coral charm in the shape of a fist links the collision of indigenous, African and European heritage during the period of the transatlantic slave trade. The symbol was originally used to ward off mal de ojo, or "evil eye."

Baez is the recepient of UMOCA's 2015 Catherine Doctorow Prize for Contemporary Painting. Curator Rebecca Maksym explains the jurors' choice: "The jurors were most captivated by her technique and use of a multitude of media, including sennelier, gouache, water color and colored pencil, to name a few. Each of her large works has a minimum of 30 layers, which not only includes the many forms of pigment, but also numerous symbols of and references to diasporic narratives. So, not only was her unique painterly style a contributing factor to her winning the prize, but also the way she incorporates sociopolitical awareness into her work."

Though still an emerging artist, Baez is starting to receive wider acknowledgment for her talents, and the exhibition at UMOCA will gain her exposure to a new audience and help further the museum's mission of showing innovative, progressive work. In her mid-30s, the Master of Fine Arts graduate of Hunter College in New York has already shown at select venues around the country and been the recipient of a prestigious Joan Mitchell Painters and Sculptors Award.

Baez has the uncanny ability to draw parallels between groups, including victims of the African diaspora and women who have struggled throughout history. This is because she is able to connect struggles for identity with their symbols. Thus, the fabric bearing them becomes the fabric of history. Stylistically, her work contains echoes of the psychedelic art and design of the 1960s and '70s that found its way into political broadsides, as well as the surrealism of the era. This ambitious mixture is all in service of social statements.

The arc of her artworks is ultimately even broader than that, though. "Firelei's work gives life to hidden, marginalized and complicated experiences of cultural hybridity," Maksym says. "She not only draws on her personal experience, but also conducts rigorous research to uncover the complexity of diasporas that occur all over the world."

In telling these interwoven stories of cultural displacements, Baez provides an alternate perspective on history that empowers the disenfranchised and gives voice to their struggles.