This year's Big Bad Baptist variants are a party for the mouth. 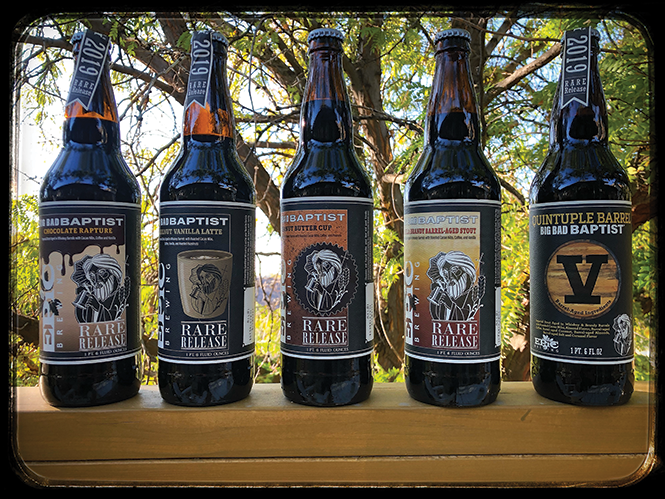 Building on the success of Epic Brewing Co.'s highly regarded Big Bad Baptist Imperial Stout, the Salt Lake City-based brewery is offering five unique variants—each with its own distinct inspiration and twist on this groundbreaking local beer. At its base, Big Bad Baptist is an Imperial stout made with local coffee, then aged in whiskey barrels. Over the last few years, Epic has been offering different variants of this beer to stay on the cutting edge of what can be achieved in chasing new flavor profiles. The brewers came up with some interesting blends; here's what you can expect.

Chocolate Rapture: The Chocolate Rapture pushes the boundaries of cacao and adds a touch of vanilla. As you can expect, this version is dominated by chocolate and cocoa. The vanilla component takes some of the edge off of the more roasty elements of the beer, and helps enhance the whiskey flavors from the barrel. It comes off as rich, full bodied and silky-smooth. ABV 10.5-12.1%

Hazelnut Vanilla Latte: Our second variant utilizes hazelnuts to achieve a soft café-like take on what is normally a beastly assertive beer. The rich blend of vanilla and toasted nuts play off of the complex flavors added to the beer by the coffee. The nuttiness is subtle, and it comes across as an almost dessert-like coffee beverage. The whiskey component here takes a slight back seat to the hazelnut, but becomes more pronounced as it warms. ABV 11.2%

Peanut Butter Cup: The peanut butter addition simply adds peanuts to create that chocolate-peanut butter combination à la Reese's candy. The use here is more subtle than in many other examples of peanut butter beers I've tried. The flavor doesn't overwhelm the whole stout, which gives the coffee and whiskey parts a little wiggle room to do their dance. ABV 10.9-12.0%

Vanilla Brandy Barrel Aged: Instead of getting the standard whiskey barrel treatment, this variant employs brandy barrels for its unique flavor profile. The result is accents that are on the vinious side of the spectrum, taking you down a chocolate-covered raisin path that is one part fortified wine and two parts dark and milk chocolate. The vanilla creates a ghostly bourbon taste that takes its cues from the boozy body of the imperial stout. ABV 12.7%

You'll notice that some of these variants have a broad range of alcohol content. This is due to the unpredictable nature of barrel aging, which can influence a beer's alcohol in many ways. Also, I'd like to note that these beers all benefit from a slightly warmer presentation: The warmer it is, the better your drinking experience will be. Enjoy them in a glass goblet or chalice to let the natural warmth of your hands do the trick. All of these are currently available at Epic Brewing Co. (825 S. State, 801-906-0123, epicbrewing.com). As always, cheers!