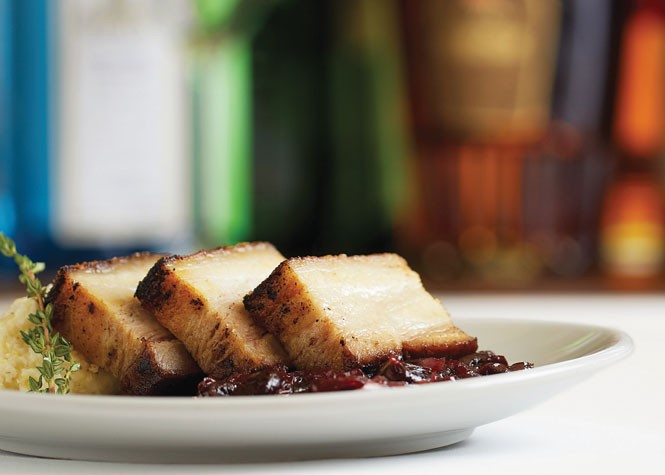 Generally speaking, I try to spend as little time in franchise and chain restaurants as humanly possible. However, I do make an exception for Fleming's Prime Steakhouse & Wine Bar. I've found that the Fleming's location at The Gateway, in particular, serves excellent food, offers an outstanding wine list, and is a very well-run operation. And I really like the option of dining at an upscale steakhouse without paying steakhouse prices. I'm referring to the value-laden 5 for $6 'Til 7 menu, which is served nightly in the Fleming's lounge/bar.

The idea is simple and pretty self-explanatory: Customers eating in the lounge area get a choice of five different bar bites, each priced at $6, until 7 p.m. What's not self-explanatory is what a bargain this deal is, because these bar "bites" are anything but puny. They're much closer to entree-size portions than anything I'd normally call an appetizer.

So, I like to belly up to the comfy Fleming's bar or grab a table in the lounge and, before diving into the 5-6-7 menu, peruse the extensive Fleming's wine list, delivered via an electronic tablet called a WinePad, developed by Fleming's. Fleming's offers a selection of 100 wines by the glass, and the WinePad allows users to see photos of the wine's label as well as read tasting notes selected and compiled by Fleming's national wine director, Maeve Pesquera. You can survey Fleming's wines by region (Napa or Burgundy, for example), by varietal and by ratings; it will even help match wines with your dinner, so you know what goes best with truffled poached lobster or peppercorn steak, for example. And, if you find a wine that you like, you can even e-mail yourself information about it from the WinePad.

As fun as it is to play around with, the WinePad won't ever replace a knowledgeable human wine expert like Fleming's manager, Joseph Wright, or barman Josh Jones, who are both savvy about wine and wine pairings. With the assistance of both the WinePad and Josh, my wife and I settled on a bottle of Pazo Torrado ($40/bottle or $8/glass) from Spain that—according to the WinePad e-mail I sent myself—is made from 100 percent Albarino grapes and is produced in Rias Baixas on the southwest coast of Spain. It's an eminently drinkable young white wine that matched most of our 5-6-7 dishes very well.

Since we were only looking at an outlay of $30 for food, we decided to order all of the 5-6-7 menu items, beginning with sweet-chili calamari. It's a generous portion of calamari rings and tentacles dusted lightly with breading, fried and tossed in an Asian-style, honey-sweetened sticky sauce with julienned red and green peppers. The Albarino we ordered was a slam-dunk with the sweet & spicy calamari.

Next up was baked Brie, an "appetizer" that could easily be shared by four people. It was a fist-size mini-round of Brie wrapped in puff pastry and baked until flaky, with cheese oozing out the seams, served with sliced gala apples, candied walnuts and wilted greens. This, too, was a terrific match for the Pazo Torrado wine.

Surely the most decadent of Fleming's 5-6-7 options is the pan-crisped pork belly. It's three large cubes of tender roasted pork belly with crispy skin, and they'd be heaven all by themselves. But no: Fleming's pushes the envelope by serving the pork-belly pieces on creamy goat-cheese grits, accompanied by sweet onion chutney. The result is a sweet & salty combination that explodes on the tongue for a mere—are you kidding me?—$6.

We carried on sipping the Pazo Torrado with our mushroom ravioli appetizer, although I think a glass of Pinot Noir would've been a better pairing. This was a plate of perfectly cooked, al dente ravioli stuffed with porcini and shiitake mushrooms, bathed in a lip-smacking, over-the-top sauce made with butter, shallots, white wine, heavy cream, dried porcinis and garnished with finely minced chives.

At this point, my wife and I were beginning to doubt the wisdom of ordering all five appetizers for two people. But, as trained professionals, we carried on and dug into a large plate of beef carpaccio—and there's no way you could even make this dish at home for only $6. At the risk of sounding redundant, this was yet another larger-than-expected serving size, featuring see-through-thin sliced raw-beef tenderloin, with a zig-zag drizzle of creamy Creole mustard sauce, topped with red onion, capers, a chiffonade of basil and finely shredded hard-boiled egg; on the side were a half-dozen crispy crostini slices of toasted rosemary sourdough bread with Parmesan cheese and paprika.

But wait! There's more! Although Fleming's 5-6-7 menu consists of five appetizers, there are two more à la carte bar menu items, which are also a mere $6, including salt & pepper shrimp. And, if you think the previous five were blowout bargains, the best burger deal in town has to be Fleming's $6 Prime burger. This is not a slider or a mini-burger. It's a full-size, half-pound burger made with top-quality ground Prime beef, topped with peppered bacon and choice of cheese (blue, Swiss or cheddar) on a fluffy, glistening challah bun. Oh, and the bodacious burger comes with lettuce, tomato, ketchup and red onion on the side, plus a serving of some of the best french fries I've tasted in Utah. All this, for six bucks. After 7 p.m., the price goes up to $13.75, which is still a steal.

And that, my friends, is why I'm something of a Fleming's fanatic.