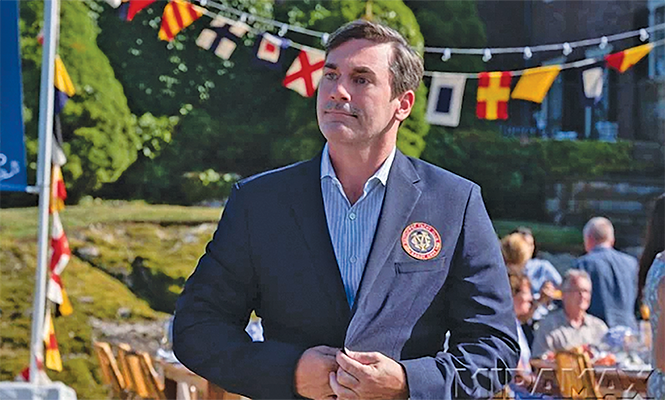 It's been more than 30 years since the last time Gregory McDonald's wiseass investigative reporter-cum-amateur sleuth Irwin M. Fletcher—Fletch, to his friends—last appeared on a movie screen. And while there are any number of reasons that a movie project can end up in "development hell," as several proposed Fletch reboots have during those years, I imagine that one of the challenges was finding the sweet spot between the joke-spouting, occasionally bumbling character that Chevy Chase made famous and the book series' protagonist who was a Vietnam War veteran closer in spirit to the anarchic surgeons of M*A*S*H. Because surely they wouldn't attempt to make a 1980s Chevy Chase movie, now that 1980s Chevy Chase was no longer available.

I can honestly say that I wasn't expecting the reboot that finally emerged—Confess, Fletch—to feel like a script that would have been written for a third Chevy Chase Fletch adventure, except with another actor. Even more improbably, Confess, Fletch works wonderfully not because Jon Hamm is attempting some vague impression of Chase's Fletch, right down to a Los Angeles Lakers cap, but because he just gets the kind of breezy comedic performance that anyone nostalgic for the original film is going to be delighted to see.

The plot takes Fletch first from his L.A. home to Rome, where he's looking into valuable paintings stolen from a wealthy count, and hooking up with the count's lovely daughter, Angela (Lorenza Izzo). As he arrives in Boston, however, he finds that the rental house he has arranged is already occupied—with a dead body. And while Fletch would rather spend his time tracking down the paintings from potential contacts like an art dealer named Horan (Kyle MacLachlan), he also has to deal with the fact that he has become a prime suspect in that murder.

That cat(s)-and-mouse game involves two local Boston homicide detectives, Monroe (Roy Wood Jr.) and his new partner Griz (Ayden Mayeri), and a lot of Confess, Fletch's strongest comedic energy comes from interactions between the three of them, latching on to a kind of playful antagonism that feels reminiscent of the original Beverly Hills Cop. It also helps that both Wood and Mayeri are terrific in their roles, part of a killer supporting cast that finds delightful performances everywhere you turn: Annie Mumolo as wacky, force-of-chaos neighbor of the murder scene; Marcia Gay Harden as Angela's lusty stepmother, wrapping her lips around a Euro-mutt accent where our hero's name becomes "Flessshhhhh;" Lucy Punch as a bubbleheaded influencer trying to explain the definition of "bespoke;" even Eugene Mirman in a smaller part as a country-club security guard weirdly obsessed with the J. Geils Band.

All of that might have been enough to overwhelm a central performance that lacked the right vibe, but Hamm brings nothing but the right vibe. It's not that he hasn't shown comedic chops previously, going back to his supporting role in Bridesmaids; it just wasn't obvious that he could carry a flat-out comedy, especially one where he was stepping into iconic shoes. And he's a delight in everything he's asked to do, finding a sensibility that feels like a natural continuation of Chase's interpretation. Hamm nails the witty banter in the script by director Greg Mottola and Zev Borow; he embraces the physical comedy when asked, from incredulous reaction takes to flat-out pratfalls. The choice to include Hamm's Mad Men castmate John Slattery as an old journalist buddy of Fletch's could easily have turned into a stunt that pulls you out of Fletch-world and into another show, but it ends up working because Hamm never stops committing to the movie he's in.

Mottola has always been most successful as a director in movies that have a hangout sensibility—like Superbad and Adventureland—so in some ways he's a perfect fit for a mystery where the whodunnit is far less important than the whosinit. While a narrative built on discursive bits of business and funny stand-alone snippets will inevitably feature a few that don't fully land, it's amazing how many of them in Confess, Fletch actually do land. It's kind of a shame that the title Fletch Lives was used up for the 1989 Chevy Chase sequel, because that's how it feels with Hamm stepping into the role. If not for the references to the pandemic and the precarious state of the journalism business, you might just get the sense that it's the 1980s all over again.