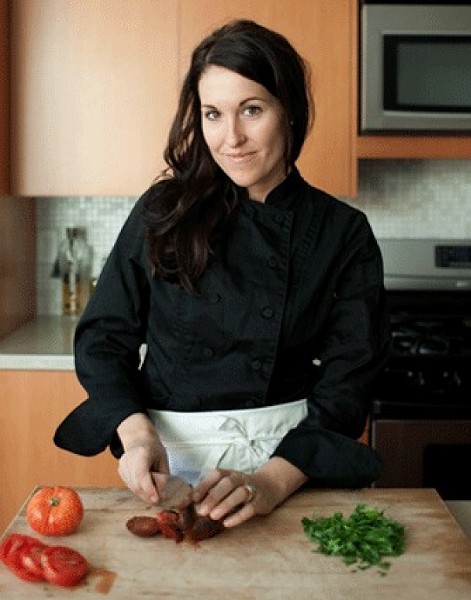 The food at art openings, unfortunately, is oftentimes not as creative as the art on the walls. Many local galleries can’t afford much, but sometimes even more upscale galleries don’t intrigue the palate with their culinary accompaniments.

At the recent Mondo Fine Art Spring Group Show opening at Light Spot Modern Design, however, appetizers by Fleur de Sel complemented both the international flavor of the art and the eclectic atmosphere of the venue. Elizabeth Gilman, a transplant from Palo Alto, Calif., started Fleur de Sel four years ago. Completing a degree in international studies at the University of Utah, she worked her way through school in restaurants, later branching out on her own.

A private chef as well as caterer, her interest in farm-to-table cooking takes the form of growing her own herbs and vegetables as a private chef, and using local organic growers for catering. “I’m passionate about the presentation and the artistic quality of the food,” Gilman says.

She enjoys the challenge of stretching a tight budget, as well as the stress of gala events. At Mondo, food included an “Asian station” with Thai veggie wraps, a “Mediterranean station” with hummus and baba ghanoush, and Norwegian smoked salmon. Mint was an unexpected but welcome addition to the baba ghanoush, and she often experiments with unusual flavor combinations.

Gilman has cooked for celebrities at the Sundance Film Festival and events for the Salt Lake Film Society and Utah Film Center, and in April, she was a chef at one of Justin Allen Kinnaird’s By Invitation Only pop-up dinners. This summer, she is slated to cater a $10,000-a-plate fundraiser for a major political figure.

Whether it’s a small, intimate reception or a large dinner party, Gilman is conscious of nutritional value as well as aesthetic enjoyment, and believes “chefs are stewards of peoples’ bodies. We are educators, too.”