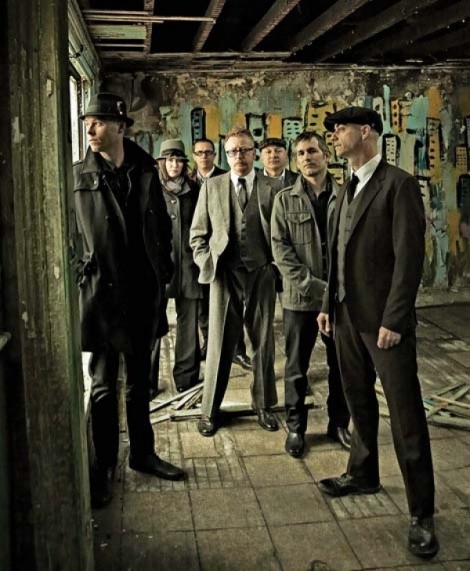 Thursday May 5
Cinco De X with Flogging Molly, Hollywood Undead
Our friends at X96 know how to throw a party, although I’m sure when they booked this two-stage rager, they were expecting spring to have actually sprung by now. The indoor stage is headlined by Flogging Molly, the Celtic-flavored poppy punks who are prepping for the release of a new album, Speed of Darkness, at the end of May. That band is always a treat live, and their last album, 2008’s Float, debuted at No. 4 on Billboard’s album-sales chart. Hollywood Undead headlines the outdoor stage, and the masked rap-rockers are currently wallowing in the success of their second album, American Tragedy, probably by feeding on the brains of adolescent children with poor taste in music. 10 Years, Drive A and Middle Class Rut are among the other bands playing the festival. Great Saltair, 12408 West Saltair Drive, Magna, 6 p.m., $31 advance/$38 day of show

Friday May 6
Black Angels
How lucky are we Salt Lakers, getting two shows by one of the best live bands around in roughly a six-month span? The Black Angels are still on the road in support of their excellent third album, Phosphene Dream, and they’ve spent the time since their last visit just getting bigger and better, touring nearly nonstop, delivering a wicked show alongside Queens of the Stone Age during SXSW in their Austin hometown, and introducing an ever-growing audience to their psychedelia-laced rock & roll. Consider this gig a must-see. Sleepy Sun opens. The Urban Lounge, 241 S. 500 East, 9 p.m., $16 advance/$18 day of show

It’s hard to believe that Joan of Arc has been around for 16 years, even though singer/leader Tim Kinsella has been the only constant in the band’s lineup. And it’s even harder to believe, listening to the band’s new album, Life Like, that the straightforward guitar-bass-drums approach of the new material is being released by a band that so happily embraced electronic loops, samples and multi-track recording in their older work. The simplified approach serves Joan of Arc well, and the current lineup that includes Kinsella’s Cap’n Jazz bandmate Victor Villarreal might be the best Joan of Arc we’ve heard in years. Air Waves and The Lionelle open. Kilby Court, 741 S. 330 West, 7 p.m., $10 advance/$12 day of show

Sunday May 8
Joe Pug
When listening to 25-year-old Joe Pug’s music, you hear an old soul in a young man’s body. You also realize his pre-music career as an aspiring playwright was no joke; Pug has a wicked way with lyrics that has earned him critical huzzahs from across the country, as well as tours with the likes of Steve Earle, M. Ward and Josh Ritter. The way Pug launched his music career, though, is nothing but modern—he gave away MP3s on his Website and personally mailed two-song CD samplers to anyone who asked for one, each with a personal thank-you note to the fan for helping spread the word of Pug’s skills. Pug is now touring to support his full-length debut, Messenger. Strand of Oaks and Mihaly open the show. Kilby Court, 741 S. 330 West, 7 p.m., $10 advance/$12 day of show

Monday May 9
Of Montreal

Kevin Barnes just doesn’t know how to relax. Hot on the heels of the critically hailed False Priest album in 2010, and a mind-boggling tour alongside fellow theatrical performer Janelle Monae, the Of Montreal leader is back with a new batch of tunes, an EP called thecontrollersphere, as well as an art book called What’s Weird? You can check out some of Barnes’ ornate visual imagery at his website, BeeWithWheels.com. Painted Palms open. In The Venue, 219 S. 600 West, 7 p.m., $19

Tuesday May 10
Joel Brown
Local youth-produced record label Spy Hop Records is throwing a bash celebrating the release of Joel Brown’s In Retrospect. Brown, a 22-year-old singer/songwriter paralyzed since the age of 9, has been writing and performing since he was 15 and signed with Spy Hop a little more than a year ago. Now his set of deeply personal songs is recorded and ready for public consumption, starting with this gig on the U campus. Dumke Recital Hall, 1375 E. Presidents Circle, University of Utah, 8 p.m., free admission, $10 for the CD

A-Trak
Producer/DJ A-Trak has had a monster year, and it’s not even halfway over. As half of Duck Sauce with fellow sonic mixologist Armand Van Helden, he landed the song “Barbra Streisand” at No. 1 on dance music charts across the globe, as well as on Billboard’s dance chart here in the states. Now touring solo on his Magic 8-Ball tour, A-Trak is hot off a furious set at Coachella and bringing top-notch talent with him—The Gaslamp Killer, Kid Sister—to throw down in Salt Lake City. Local DJ and winner of the CWMA DJ Spin-off Flash & Flare is on the bill as well. The Complex, 536 W. 100 South, 9 p.m., $17 advance/$20 day of show

Dredg
Pop-rockers Dredg decided to work on their new album, Chuckles and Mr. Squeezy, by taking full advantage of modern technology. In terms of the recording process, that meant the band members spent more time emailing each other bits and pieces of songs than they did in a studio together. And in terms of the music, that meant getting producer Dan the Automator on board to push the band to try new things and sample new sounds. The result, according to singer Gavin Hayes, is a “renewal kind of record” for the band. Now they’re off and headlining a tour that also includes The Dear Hunter, Balance and Composure and The Trophy Fire on the bill. Avalon Theater, 3605 S. State, 6:30 p.m., $13 advance/$15 day of show