Localvores’ Revenge“You can’t get any more local than growing your own food,” says Emily Aagaard, the executive director of the Wasatch Community Gardens. She is referring to the Choose Local! bandwagon large retailers such as Wild Oats and smaller, neighborhood merchants are jumping on to win the business of localvores. “You know where the food comes from, and you know what went into it. A community garden, a back yard or even a smaller farm can be sustainable, a cycle. That’s where the chicken-coop tour came from; it’s another step in that direction,” says Aagaard. 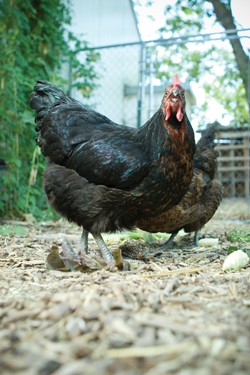 Along with the idea of sustainability (which means limiting the use of extraneous natural resources, like letting chickens eat pest insects in a garden instead of spraying pesticide or using the chicken’s manure as fertilizer or compost), eating food with low food mileage also saves gasoline, reducing the carbon footprint made by the black boot of eco-senseless food importing. Localvorism even has implications for foods with the “organic” label. “You’re talking about how the organic product got here; it certainly wasn’t biked here,” says Aagaard. “‘Organic’ has become such a popular term, but people have forgotten that it started because there was something wrong with what [Big Agribusiness] was doing. It was a reaction. But now, large companies have taken the word because it has market power. It’s like buying your way to sainthood.” Organic food is now a staple for food enthusiasts—those who can afford it—so big retailers such as Wal-Mart, Target and Kroger are starting to import cheap organic produce from around the world. It’s the signal for the localvore and backyard agriculture enthusiast to strike back.Slow Foods Utah, an organization devoted to the promotion and sale of “good, fair and clean” food, works to get locally grown food to the people by informing consumers, bringing producers together and encouraging restaurants and grocers to carry low-mileage foods. This and the preponderance of farmers’ markets as well as other organizations like Crossroads Urban Center’s Food Co-op are evidence of increasing demand for good, local food.Seth Winterton is the coordinator of the Utah Department of Agriculture and Food’s organic-food program. He also is deputy director of Utah’s Own, an organization that promotes locally grown food and offers grants to producers. Winterton sees importance in the eat-local movement, but he’s realistic about the extent to which localvores will go. “We have to get away from that concept of cheap food,” he says. “If you want nutritious and delicious locally grown foods, you have to be willing to pay a premium for that great food that tastes better. It’s a mindset. There has to be an investment.” >>CW