But Does The Good Stuff Sell?
“We started at the [downtown] Farmers’ Market, but it didn’t seem like the right fit. It wasn’t quite profitable enough,” says David Bell, owner of Bell Organic Farms in Draper. “You have to start at 4 a.m. if you’re really serious, and that’s for producers like us that live here locally. There’s no refrigeration; the lettuce is wilting and the squash doesn’t look so fresh and, by the time [the market] is done, there’s no way you can keep a marketable product. Our very best day at the market was around $500. It’s not really a business.” 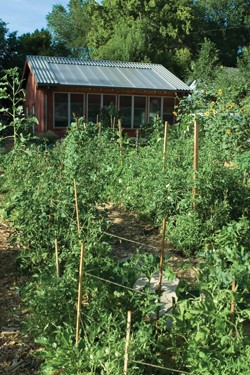 Bell started with a half-acre garden nine years ago. After a few unsuccessful months at the Farmers’ Market, he found a way to sell his crops that worked—to restaurants and small grocers in the Salt Lake City area. He now has five acres of garden, with clients including Liberty Heights Fresh and Squatters pub. He still keeps a day job selling real estate.

Yet Penny Trinca, of First Frost Farms in northern Utah’s Cache Valley, has been selling the crops from her five-acre farm at the Cache Valley Gardeners’ Market for about nine years. She says the garden brings in about a third of her income, probably because she doesn’t go through a third-party distributor.
Utah State University College of Agriculture professor Ruby Ward wishes more consumers would be willing to pay artisan prices for food they can have a connection with, food grown locally.

“Sometimes, when people start selling at a farmers’ market, they really underprice what they have,” she says. “It’s not to say they want to put a high price on it, but it’s a crop of really high quality with a different food experience. You really should be charged what it costs to make it.” Especially with organic and backyard growers, a lot of soil preparation, sustainability methods and other costly measures and sacrifices must be carried out to feed the localvore. Plus, small producers don’t get any of the government subsidies that enable big farms to sell their crop under cost. The localvore will pay the artisan prices. But in a future where some foresee a food shortage, everyone would have to be willing to fork over $5 for a dozen eggs from free-range, organically raised chickens.

Consumers in this state, as Ward points out and the 2002 U.S. Agricultural Census concurs, have larger families and are somewhat dependent on cheap, mass-produced food. Organic purchases are often outside the budget. The answer would seem to be to follow Kris Justesen’s lead for urban dwellers to construct their own coops for their own free-range organic eggs. Creating a number of large-scale urban community gardens could provide greater food security for Utah’s poor in ways cheap food never has, an impressive goal of the Wasatch Community Gardens and Slow Food Utah. But, as agriculture expert Seth Winterton admits, it’s a tall order. Starting a large garden or a chicken coop isn’t cost effective, and it takes time and effort.

Jeffrey LaFrance, an agricultural and resource economics professor at University of California-Berkeley, agrees that you have to take the total cost of food supply into account. “That’s the question society needs to address: Of course it’s expensive from the standpoint of energy use, importing pineapples from Hawaii, but it’s probably the cheapest way to get pineapples.” His wife tends a small garden through which they try to be sustainable.

Forget the pineapples. For Krausert, Justesen, Celia Bell, Pinkowski and others, that’s a nonissue. They don’t count the hours spent kneeling in the soil or building chicken coops and food dehydrators from scavenged scrap materials. When asked how much money they’ve put into their efforts, they shrug it off as if nothing matters less. Gardening is deeply rooted in their soul and, perhaps someday, the masses will catch on. Maybe in the post-industrial semi-doom, they’ll be forced to.

Neither LaFrance nor Ruby Ward puts stock in a looming food shortage predicted by futurists and urban food-sustainability die-hards. “I think that a lot of people overstate a lot of those things,” Ward says. “Food will become higher priced, but we’ve already seen that a little bit. It may make local foods a little less expensive.” As a society, we’ll absorb the increased food costs grudgingly but without fail, just as we’ve done with oil. >>
CW