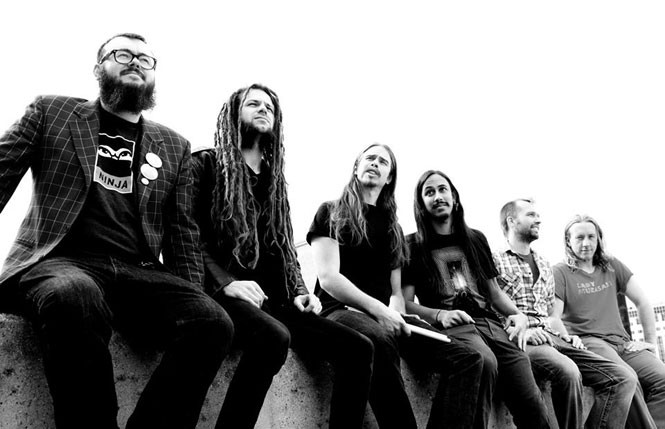 "Ladies and gentlemen, boys and girls of all stages/ I'm presenting a show that was built through the ages/ Through all of the pain, the fear and the screams/ I've collected this assortment of unusual things." Thus, the character of the Ringmaster introduces not only a death-defying performance by his circus troupe, but also The Show, the circus-themed new album from Salt Lake City folk-punk band Folk Hogan.

While Folk Hogan is well known for their bar-friendly drinking songs, on The Show, they shift their focus from the wonders of whiskey to fantasy, and tell a richly layered story in the form of an immersive concept album. Beginning with appearances by the Fire Breather, the Lion Tamer and other motley characters, and ending with a fatal knife fight, The Show tells the strange, romantic and sometimes violent tale of a group of circus performers in surreal, blood-splattered detail.

"We're certainly not minimalists when it comes to lyric-writing," says mandolin player Moses McKinley. "We like to tell stories."

The Show—which Folk Hogan will play for the first and only time in its entirety at their release show—might be seeing the light of day now, but a lot of the material on it is far from new. Folk Hogan began writing it around the same time they were also creating their debut album, 2012's loud, fast and rowdy Band of Mighty Souls. They released Band of Mighty Souls at that time "because we knew we needed to get out and pound the pavement," says accordion player Canyon Elliott, but they've been carefully crafting the back story and music of The Show for years.

Both albums have that Folk Hogan brand of storytelling, even though on Band of Mighty Souls, those stories are usually about the joys and perils of getting hammered. "Even cheesy songs like 'I'm Still Drunk,' where the chorus is just chanted over and over, that's got a pretty specific timeline of an entire day of an alcoholic," Elliott says. "It turned out really well for him when he drives off a cliff."

But on The Show, recorded about a year ago, Folk Hogan expand their storytelling focus, as well as showcase more accomplished instrumentation—from Elliott and McKinley, as well as bassist Jared Hayes, guitarist Nick Passey, drummer Curtis Stahl and banjo player Kameron Anton. "I feel like [Band of Mighty Souls] is very happy and jaunty, and [The Show], in general, is a lot darker," McKinley says. "It's a good example of simple, formulaic and happy songs versus somewhat more complicated, dark songs."

The Show's circus concept was Elliott's creation, and he poured so much detail into the story that he likely has enough material to fill a book. A lot of the tracks are their own self-contained stories—not necessarily only chapters in a whole—but if the album is listened to from beginning to end, together, the songs tell a complete story. "If you only want to listen to one song, hopefully they all sound like individual stories, but on the whole, all the meanings change if you listen to it at once," Elliott says. "Songs like 'Ringmaster' are very much in the storyline—like, you can't pull it out and think that contextually makes sense. But songs like 'Fire Breather' don't need to be in this circus album to make sense as a story, much less as a good song."

After the Ringmaster—who is "the incarnation of the circus," Elliott says, "he doesn't really have a soul to himself"—announces the night's show, the tent's spotlights shine down on performancesby the circus troupe, in punk-fueled gypsy-tinged songs like "Elephant Rider" and "Illusionist." But discontent and mutiny are lurking behind the scenes; the performers want to leave the circus, but the Ringmaster won't let them. In "Freak Show," the lyrics "A thousand miles on the train, we're shackled in cages/ For your entertainment, we'll take center stage" depict the plight of some of the troupe's members.

But a power shift begins to happen toward the middle of the album. In "The Show," the Lion Tamer, the Ringmaster and the Illusionist discuss "whether or not they're essentially living a life of slavery, of indentured servitude, or if they are actually truly out there doing things for their own good," McKinley says. The motives of the Ringmaster, however, are more complicated than the troupe realizes, as he himself is a prisoner to the circus. "Is the Ringmaster the villain? Yes, but at one point, he saved and gave a 'safe' home to everyone that's there," Elliott says. "Now, did he do it to help them, or to feed the insatiable thirst of the circus? It's both, really."

After the discussion, though, comes "Reprise," when everything "crashes and explodes," Elliott says. The circus erupts in all-out violence as the Ringmaster attacks, culminating in a frenetic instrumental finale, "Knife Fight in the Top Tent"—which, musically, ties back to the album's opening song.

From the personalities and backgrounds of the individual stories to the plot's twists and turns, "it was hard to do all of those things and still make [The Show] digestible," McKinley says. But while the album is full of dense detail, at its core, the tale of the circus is a universal one, about individualism and freedom.

"If you're a kid in school, then [The Show is] about your parents," Elliott says. "And if you're late on your taxes, it's about the government. If you're a human citizen, it's about aliens ruling you. It's about oppression, and wanting to get away from that and realizing that. To me, that's what it's grown into—it doesn't have to be that heavy, though, it can just be songs."