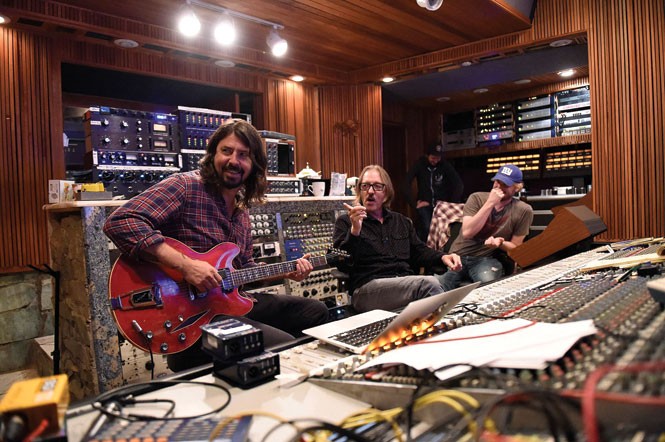 
Series Debut: If you're new to The Only TV Column That Matters™, you should know that I like my music played and produced by humans—loudly, with electric guitars and minimal artificial sweeteners. In what's left of the pop mainstream, Foo Fighters are the last band standing who fit that bill, and Lemmy bless frontman-turned-director Dave Grohl for flying the rock & roll flag every opportunity he gets. Sonic Highways is an extension of Grohl's Sound City doc, following the Foos to eight iconic studios in eight cities as they record and soak up local musical history at each stop (Grohl even sits down with President Barack Obama in the Washington, D.C., episode because, well, he can). Grab any kid who thinks an iPad is a recording studio and Auto-Tune is an indispensable engineering tool and make them watch Sonic Highways.


Series Debut: Personally, I would've preferred Crank: The Series (and I have a spec script, potential investors), but a serialized take on Jason Statham's Transporter franchise makes more sense. The lead casting of Chris Vance doesn't; his Frank Martin lacks Statham's menacing charisma and hairline (no baldies on TV unless you're Larry David), but at least he's British and, really, all a Transporter requires is explode-y action, exotic locales and dangerous packages and/or distressed damsels to transport. The Series delivers on those fronts, and doesn't dumb it down, either, likely thanks to showrunner Frank Spotnitz (The X-Files; underrated 2012 actioner Hunted). Wonder if he or Dave Grohl would be interested in my Crank screenplay.


Monday, Oct. 20 (TBS)
Season Premiere: The three American Dad! episodes that aired on Fox in September were leftovers from Season 10; the 15-episode 11th season will run on TBS and Adult Swim (this information provided for readers who actually care about "seasons," "networks," "episodes" and other such TV minutia). Despite TBS' promos, it's not any "edgier" than before, but American Dad! is still smarter and more consistently funny than the series from whence it spun-off, Family Guy. Even funnier: Fox canceled American Dad! to make room for Mulaney, which had one of the lowest-rated debuts in television history a couple of weeks ago. Well, not so much funny as an I Told You So moment (which, also for you newbies, I take advantage of as often as possible).


Season Premiere: There was no reason for the first season of True Tori, Tori Spelling and husband Dean McDermott's 43rd reality show, to exist, but Season 2? Now that the producers have made McDermott slightly interesting by painting him as a cheating scumbag (with some woman named "Emily Goodhand" ... yeah, right) who performed some kinky sex acts on poor Tori (or, more likely, had her perform them on him—strap that image on), there's still no argument to be made for it. Wait—Tori might be pregnant with Child No. 5? Never mind; all priorities are in their proper places.


Season Premiere: Lisa Kudrow is back for a fourth season as online therapist Fiona Wallice, with a new Web Therapy patient list that includes Gwyneth Paltrow, Jon Hamm, Jesse Tyler Ferguson, Matthew Perry, Allison Janney, Lauren Graham, Craig Ferguson, Calista Flockhart, Dax Shepard and Nina Garcia. But, get this: In November, Kudrow returns to HBO in the comeback ofThe Comeback—she'll be headlining comedies on two premium-cable networks simultaneously. Sure to be a touchy subject in that session with ex-Friend Matthew "Mr. Cancellation" Perry.