Existimos creates a place for queer people of color to create and celebrate. 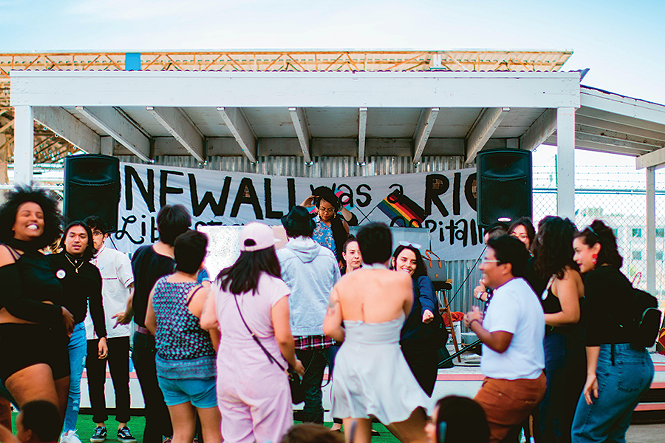 It can't be said enough: Utah is white. If you're a person of color, you probably think about it every day, but many white Utahns need reminding: The spaces that we cherish as welcoming, inclusive and diverse for arts, entertainment and social issues? They're pretty damn white.

"Utah lacks representation for every marginalized group," says Patricia Campos, co-founder (along with her sister Graciela) of Existimos, a collective dedicated to creating events and spaces focused on non-white, queer representation. Although Utah has diversified racially and ethnically, and probably will continue to do so, white people still make up more than 75% of the state population. And while there are certainly spaces that do occasionally focus on marginalized groups, Patricia Campos argues, "they are run by white people. We need spaces by us, for us."

In fact, "For Us, By Us" was the title of Existimos' June 22 Pride event hosted at the Utah Arts Alliance. A recent Chillonas Con Chingaderas podcast episode—hosted by two latinx queer women who go by the performing names of Alexandra and Yami—helped affirm Existimos' mission. Featuring interviews from event attendees, the hosts found that queer and trans people of color are happy to have found a space for them. "I'm still really hyped about it, even the day after," Yami says. "I couldn't get off that feeling of being in such a safe space."

For the first time, the Campos sisters raised money for that event rather than self-fund. "We wanted to pay our talent and not profit off the queer/trans/people of color community, since Pride can be very capitalistic," Patricia Campos says. They worked closely with Stephanie Leaks, a local poet and visual artist, to make the event more inclusive. "This was our biggest event yet," Patricia adds, "and it just felt so safe. The first time you're in a space like this— it's so emotional. You want to dance. You want to cry. You want to hug everyone."

Utah's increased diversity in recent years hasn't necessarily translated to equal distribution of power, nor guaranteed equal representation. According to a projection by the Kem C. Gardner Policy Institute at the University of Utah, by 2065, white Utahns will still make up an overwhelming 65% of the total population—in other words, although Utah will continue to become more diverse, it won't feel like it, and 40 years from now, our state will likely still trail behind the rest of the country in this respect.

"Let's be honest," Graciela Campos says, "there are people of color in Utah doing work in the arts [and for] social justice, but it's not talked about as much because they aren't white." Part of Existimos' mission is to not just showcase marginalized artists and workers, but to create a new platform that exists outside of the Utah hegemony, creating power through visibility and a matter-of-fact assertion that they exist.

"Listen, I don't want a seat at their table," she continues. "We aren't here to get approval from white organizations. We are making our own table and lifting our people up. Salt Lake needs to open their eyes to a community that's always been here—they just refuse to see them."

Existimos started by observing a need in Utah's minority communites. In August 2017, Patricia Campos realized she was seeing a trending lack of representation in local photography for Latinxs or other people of color. She created a zine focusing on these narratives through photography. The sisters, who are Salvadoran, realized the show could be an opportunity to help children in El Salvador, where their tía lives, and held a donation drive for school supplies for their native country.

Since then, they've run three other events, including a film festival, a visual art show and June's Pride event. With an open mic night coming up—Friday, Aug. 9, in Taylorsville at Snacks & More (a local Latinx business)—they show no signs of stopping. The night will be in collaboration with Utah Humanities, The Silenced American Podcast and Unidad Immigrante, each of which support the Existimos tenets of art, community and healing.

Although they've enjoyed collaborating with venues like Sugar Space Arts Warehouse and Utah Arts Alliance, the Campos sisters are looking for a space to turn their collective into a permanent nonprofit. "Existimos is here to stay, and is just going to keep getting bigger," Graciela Campos says. "We want to be in schools—we want to inspire the youth. When [Patricia] and I were younger we didn't have mentors who looked like us in the arts, or anywhere really. We want to bridge that gap and show children of color that there's people from their demographic doing things in spaces that weren't created for them."