Days of Sound debuts with music and more in central Utah. 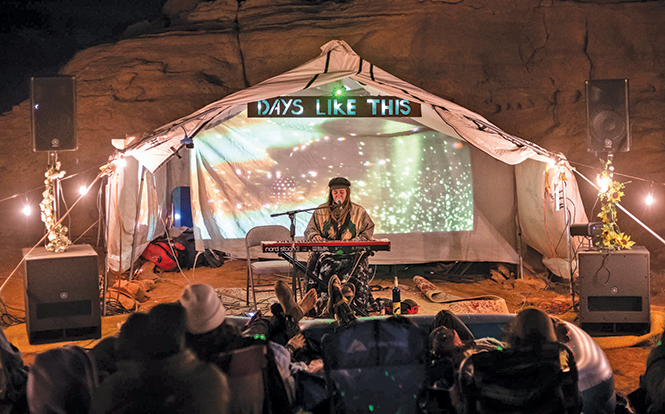 While Utah tourism explodes, central Utah is quietly cool—they've got Pando, Fishlake National Forest and Mystic Hot Springs. And, if all goes well, they'll have a new music festival, too.

The Western half of Fishlake National Forest, split by the Sevier Valley, is where some local music makers and enthusiasts are setting out to host their Days of Sound Music Festival, which debuts this weekend, Friday, Oct. 1 - Sunday, Oct. 3. The new outdoor camping festival is meant to give locals the chance to both play and be immersed in a musical experience out in beautiful Utah nature, while also bringing in talent from all over the place.

The intention for Days of Sound was set this summer by Alisa Fedele—an Australian-by-way-of-Los Angeles musician who recently moved to SLC over the course of the pandemic—along with local music producer Bryce Myers and brothers Graham and Forrester Pickett. After practicing with small backyard shows and a mini-fest filled with friends out near Hanksville, they began searching for the perfect space to host a real festival. They finally connected with their friend James Jenson, whose family offered up their piece of land down in the Fishlake National Forest.

"With all the festivals shutting down last year, and so many of our friends just wanting something to do, we [want to] just make it happen," Forrester Pickett says. "I think a big thing, too, is that there isn't something in Salt Lake as a festival that would highlight local artists, as well as [providing] a reason for people to gather and camp, and be in that immersive kind of experience."

Myers concurs, and explains his own motivations for wanting to create a new festival in Utah: "I've gone to festivals a lot over the last decade, and really enjoy the space that's brought together by artists and music enthusiasts. It's just a really cool, magical, inspiring thing." He cites festivals like Lightning in a Bottle in California as a great example of a festival with atmosphere and consciousness, the kind he'd like to see in Utah. "They have the craziest, coolest stage designs [and] focus on negating your environmental impact," Myers adds. "I guess it's their efforts that we're aspiring to."

For that reason, they've got a car pass fee of $25 to encourage carpooling to the somewhat remote and delicate forested area. And as far as COVID-consciousness, this festival is completely outdoors, save for some port-a-potties and a yurt or two for storing gear. Campers can camp as far away from one another as they want, and there's a cap at 300, though Myers thinks turnout will be even lower in the end. Proof of vax or negative test is required, and rapid tests will be onsite for $75.

"Since we're doing it at a smaller capacity with COVID, this is going to be a big learning experience for us not shooting too far for the stars," Myers says. "It will be a very good, fun, special experience because it's such an intimate group of people."

If all goes well, they do want to go bigger, with sponsors and vendors included. But even as it stands, the festival has a pretty robust lineup so far. Fedele will be playing as Insali, and she's used her music contacts to bring in all kinds of artists from her many corners of the world, including Los Angeles, Mexico and Australia. An oft-Utah-visiting artist from Texas, Jonny Gold & The Sunflowers, will stop in; Leah Woods will bring her neo-soul from New York; the Swiss Izzy Outerspace will blend dream pop and folk; Eau Claire, Wisc.'s Hannah Connolly will display her own take on folk country. There's also a great lineup of locals, despite the Kilby Court Block Party happening the same weekend and scooping many acts that Fedele asked to come. Among them are Sunhills, First Daze, The Button-Ups, Casio Ghost, Flip Forces and a set from Myers performing as Late Riser.

While they had a small budget to work with for this debut, Fedele said artists have still been happy to sign on. "That's how a lot of events work at first, you really just gotta know the artist and they're doing you favors. To be part of something bigger than us, you gotta start somewhere, so they're in it for that as well, to be part of the community," she says.

In addition to the music, there will be opportunities to really immerse in the environment, including yoga, workshops on inner-child expansion, poetry, dance, Qigong, Reiki healing and psychic readings. Myers explains, "I feel like during the day—obviously music's going to be epic and fun—but there's also going to be that daytime feeling of, 'What if I wanted to get a little exercise in right now, learn something new, experience something out of the ordinary that could lead to some sort of personal benefit?'"

Pickett adds, getting back to the point of the festival, "Since we are on a beautiful piece of property, and not a lot of people get a chance to get out into that space, we want to offer something along the lines of—instead of just focusing on the party aspect—being aware of yourself." Tickets to the festival are $75, and can be found with more info at daysofsound.com.