What's the worst outcome in the net-neutrality debate? 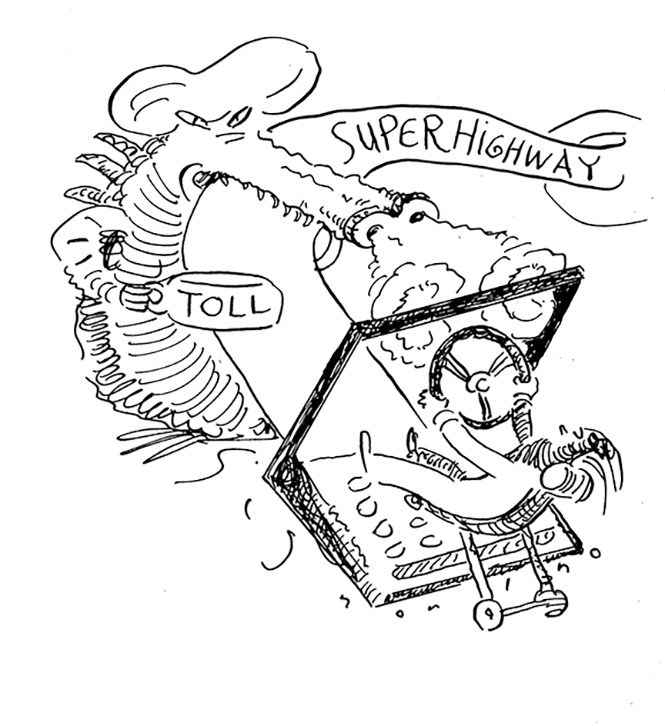 There seem to be two major concerns with a lack of net neutrality: pricing (want to browse espn.com? That's another $5 a month) and content (would internet service providers refuse to transmit certain sites?). How bad could it really get? —Bryan Thurn, Jacksonville

Great news: The genuine worst-case scenario you're wondering about is finally starting to come into focus. It's about time. The debate about net neutrality is only a decade old, but feels like it's been going on forever—probably because it's existed mostly within the realm of the hypothetical: What might happen if this happens? What might not happen if that does? At long last, we have something concretely terrible to worry about.

For those who've been scrolling past this stuff the whole time: The concept of net neutrality refers to the principle that, to crib from the Harvard Business Review, "A broadband internet provider should not block, slow or otherwise unfairly discriminate against any website or online services." The examples of what this might look like, as you note, tend to invoke a "tiered" web, where premium pricing buys you faster, better service, or maybe it costs more to access bandwidth-heavy sites like Netflix.

Not the most terrifying prospect in itself, maybe, but proponents of net neutrality fear a slippery slope. Say ISPs can charge different rates for different content, or even occlude access to certain kinds of content; then say The New York Times publishes a damning investigation into Comcast's corporate practices. The concern is that, absent federal regulation, Comcast could retaliate—block nytimes.com, slow it to a crawl or charge a fee to view it, or whatever. The net-neutrality folks see this as a First Amendment issue, where the government should intervene preemptively to protect free expression online.

This sort of thing hasn't really happened, at least so far; as I say, the whole thing's been a bit hypothetical. According to opponents of net-neutrality rules, that's no coincidence: This is a self-regulating system, they argue, that doesn't require government interference. The feds don't need to make sure Comcast doesn't mess with your Netflix; fear of consumer discontent will ensure good behavior.

Entrusting our civil liberties to the free market might sound like a naive plan at best, particularly as ISPs tend to face only limited competitive pressure. Still, neutrality opponents might be on to something. They're particularly het up over a rule issued in 2015 by Barack Obama's Federal Communications Commission that reclassified ISPs as "common-carrier utility services," subject to stiff federal oversight. It isn't hard to make the case that common carriers of the past—think railroads, or the Ma Bell-era phone system—wound up losing a step innovation-wise, and I suppose it's not impossible the internet could go the same way.

The ISPs themselves have been on both sides of the question. Some sued to overturn the Obama regulations but have recently come out in support of "permanent, strong, legally enforceable" rules, per a Comcast statement this year. They want Congress—that famously effective governing body—to take up the issue, though, rather than leave it to the executive branch. One senses the ISPs are a little sick of the debate, too, and have gotten to the point of just wanting some consistent guidelines.

Fat chance. As with everything else these days, Donald Trump's ascension to the presidency has injected elements of both chaos and menace into the net-neutrality debate. His administration has (naturally) taken steps to reverse Obama's rule, raising the specter of regulations that simply toggle on and off depending on who's in power.

This, I think, is where your worst-case scenario emerges. We know that, absent regulation, an ISP could theoretically block or slow access to some piece of disapproved content. For the sake of this scenario, let's imagine that content is an unflattering article about the president. Now, in a hypothetical unregulated world where it was technically in that ISP's power to do such a thing, it's still difficult to see it happening, assuming pre-2017 Washington rules remain in play: You'd figure that long-functioning systems of political and corporate accountability, the fear of scandal, etc., would restrain president and service provider alike from trying any funny stuff.

But now? It's 2017. We've got a president who loves publicly going after corporations, particularly media outlets, who've displeased him. We know his Twitter activity can move the stock market. Scandal is meaningless to him; Congress has yet to stand up to him. We've already seen ISPs participate in the suppression of internet speech in places like China and Russia. I submit it's not that hard to envision a time when an ISP might think carefully about what kind of content it allows to be seen on the web, for fear of poking the orange dragon. No external pressure required—this would simply be the brutal bottom-line logic of capitalism responding to the self-preserving impulses of authoritarianism. Not to put too rosy a spin on it or anything.