The art of containing the sacred 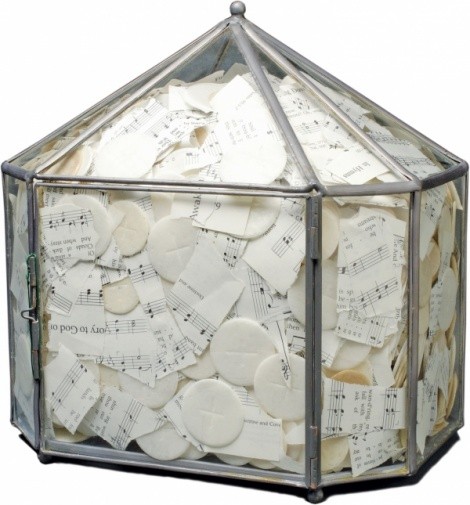 Entering a space filled with Frank McEntire’s artwork—whether in his West Valley City studio or at an exhibit of his new works at Nox Contemporary gallery—the room becomes an uncanny kind of space. But that’s by the artist’s own design. Reli-QUERIES—the 10th solo exhibit of his sculptures and mixed-media assemblages and the most unified in theme—explores the notion of artworks as reliquaries, or containers, in which sacred as well as secular artifacts are kept. He has found a singular way to make use of the gallery space as a locus of aesthetic as well as a kind of spiritual contemplation.

McEntire appropriates objects in a manner reminiscent of Marcel Duchamp’s “Readymades,” fashioned from found objects, but his purpose is to “re-sacralize” them—to transcend their physicality and direct the viewer toward a spiritual contemplation. But it’s a convoluted exercise at times, approaching the numinous from unconventional angles and juxtapositions to reawaken a sense of invention and immediacy. The apprehension of the spiritual in his work is to confront the radical Other, but it’s an alternative perspective from which subtle relationships with the viewer start to grow. He wants viewers to meditate on these works: “When you spend time with them, you see multiple layers that transcend the object,” he says.

Familiar, even iconic figures catch the eye in settings that are sometimes lush, at other times stark. “Living Water” is a faucet issuing forth glass rosary necklaces, and “Reliquary for a Host of Broken Hymns” contains communion wafers and torn-up strips from a hymnal inside a glass box. “It’s taken hundreds of years for these shapes to take the form they have,” he notes. “They not only get stuck in time, but they also mark time. They are a link to the past.”

“Merkabah”—a sculpture depicting the chariot on which Ezekiel was taken up into heaven—was based on Our Lady of San Juan and includes holy water from the San Juan basilica in Texas in an antique vial, although the chariot has echoes to other religions as well. 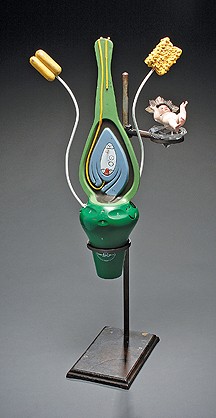 For McEntire, the way to the spiritual has to include the political. Sometimes, that connection is by coincidence, as with the sculpture “Immaculate Conception,” where a plastic anatomical model of the womb is mounted alongside a figure of baby Jesus, which McEntire says resembles Jason Chaffetz. “He has a complex, anyway,” the artist says, chuckling. The religious artifacts in McEntire’s work occasionally have been misinterpreted as disrespectful—a vending machine stocked with communion wafers was taken out of a show—but these are always efforts to comment on the way religion has been perverted by those in power. “The Five Underwood Stations” places in antique typewriters a jet print of five evangelical or political leaders, like Jimmy Swaggart, who committed indiscretions, succumbing to the feeling of invincibility of being in power.

A Houston native, McEntire took an interest in discarded and found items at an early age. That ritual of discovery extended into spirituality as well, as he explored everything he came across. He’s studied everything from astral projection to Buddhism, joined the Hare Krishnas, and lived in a political commune in the 1960s, where he organized anti-Vietnam war events and civil-rights activities. Recently, he converted to the LDS Church and does philanthropic work for the church. “Some people think you are one thing spiritually, then another, discarding the last,” he notes, “but it’s all part of who I am, and I mine all of that. It’s all part of my creative vocabulary.”

McEntire has had a major presence in Utah arts that sometimes is felt behind the scenes, apart from the dramatic aesthetic of his artworks themselves, that comes from his training as a theatrical scenic designer. Of his work as an educator and arts administrator—he’s on the board of numerous local agencies and was formerly executive director of the Utah Arts Council—he says, “Budgets are moral as well as political and economic documents. It’s a discussion of how people are treated.”

Reli-QUERIES coincides with the release of the book The Destructible Object and Other Essays: The Sculptural Work of Frank McEntire, including essays on his work by several scholars and critics, including poet Alex Caldiero and Jay Heuman, former curator of exhibits at the Salt Lake Art Center. In his essay, Caldiero says McEntire’s work is “ritual free of dogma and is nondenominational; ritual brought back to its primal roots: the human need to respond to the ineffable.”

These “queries” aren’t in search of an answer, but serve as a container for contemplation, an attempt by McEntire to allow the metaphysical to exist in space and time—if only for a moment.