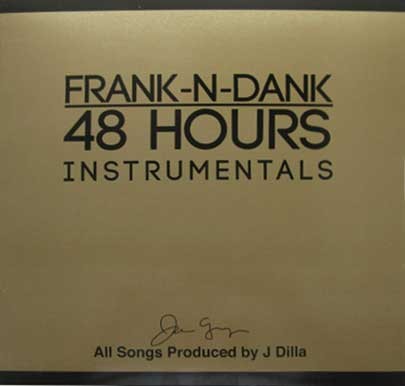 In celebration of J Dilla’s birthday, Stone’s Throw Records released one of the more disheartening albums by hip-hop’s most pedestaled producer, Frank-N-Dank’s 48 Hour Instrumentals. As the story goes, the project was doomed from the beginning. The year was 2002, and Dilla had just signed a solo deal to MCA Records (which, at the time, also included heavy hitters like The Roots and Common). To the surprise of MCA, Dilla linked up with underground Detroit-based emcees Frank-N-Dank. This didn’t sit well with the label and, not surprisingly, they dragged their feet on the un-radio-friendly project. After multiple rewrites and refusing to clear samples, MCA eventually washed their hands of 48 Hours, and a year and a half later, an unmastered, rough copy limped its way into stores. At the time, the album was considered an industry failure, but despite the poor quality, the synth-heavy production on 48 Hours is some of Dilla’s best and most overlooked work. Now, almost 10 years later, Stones Throw has tossed aside the vocals and released a proper, polished release of Dilla’s once-dead project. Releasing posthumous work from Dilla’s archives is nothing new and is something fans will see more of for at least the next decade or so. But out of all of the projects that will eventually see new life, this is one I’m sure Dilla himself would be all right with. Stones Throw Records, Feb. 7 (Colin Wolf)

Though Miracle Mile doesn’t step too far outside of STRFKR’s comfort zone, the album is a more polished version of what the trio does best—catchy and danceable indie synth-pop.

As did previous albums Starfucker and Reptilian, Miracle Mile creates intricately layered soundscapes with guitar riffs, bass lines, strong drum beats and reverberating vocals. Many of the songs sound almost dream-like, yet they contain enough beat to keep the dance party popping. The album starts off strong with “While I’m Alive,” a track that stays true to the band’s sound but amps it up with a modern disco feel and a little more funk. Feelings of nostalgia are evoked with such tracks as the retro, beach-y sounding “Isea” and “Beach Monster,” but the album falls a bit flat with a few of the tracks in the middle, which are somewhat indistinguishable and leave the listener wanting more.

The album finishes strong with “Say to You,” a bittersweet, yet playful, love song; and “Nite Rite,” the final song of the album, which is the most interesting and contains a more intense level of emotion and sound than other tracks. Pleasant yet deeply engaging, the song’s swells, synth and layered vocals create a listening experience that is a uniquely satisfying combination of danceability and the ethereal. Polyvinyl, Feb. 19 (Nicole McDonald)