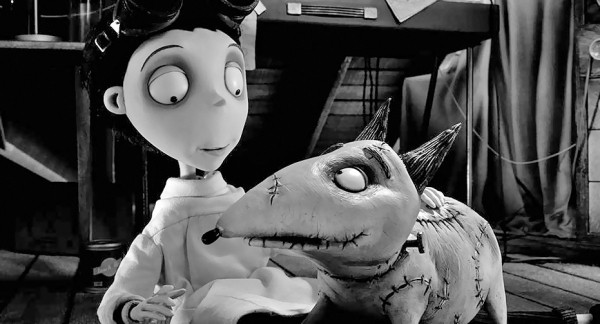 In 1984, a 25-year-old Disney animator named Tim Burton made a 29-minute live-action short film called Frankenweenie. The charming, lively story found a suburban schoolboy named Victor Frankenstein (played by Barret Oliver) reviving his beloved pet dog, Sparky, after the pup was struck and killed by a car—with all the ensuing (but family-friendly) craziness one might expect when a little boy plays God. That filmmaker would one day become a maker of increasingly frustrating Hollywood blockbusters—but in 1984, he was still a young guy reveling in the chance to make movies like the ones he loved as a boy.


Part of what makes Burton’s stop-motion-animated, feature-length expansion of Frankenweenie charming is that, for the first time in ages, you can see that enthusiastic youngster with the light touch. You can see him in the opening sequence that finds young Victor (Charlie Tahan) showing his parents a stop-motion movie that he has made, with army men fighting against a giant menacing monster. He’s there in the character of Victor’s next-door neighbor—Mr. Burgermeister, the mayor of their town of New Holland—who bears a striking resemblance to a certain stop-motion villain from the Rankin-Bass Christmas classic Santa Claus Is Comin’ to Town. You can even feel him in the casting of Martin Short and Catherine O’Hara in multiple voice roles or the decision to film in black & white, as though Burton were a struggling kid trying to make the most of whatever resources he has available.


It’s still not easy to stretch a 30-minute Frankenweenie to nearly 90 minutes without leaving the impression of a college student playing with fonts and margins for a term paper. Burton and screenwriter John August have hit & miss success, primarily building the larger plot action around a science fair organized by the school’s creepy, foreign-accented science teacher, Mr. Rzykruski (Martin Landau), Burton’s latest tribute to Vincent Price. There’s a terrific scene involving a meeting of the school’s concerned parents, which Mr. Rzykruski turns into a chance to lambaste them for their fear and ignorance. It feels like a perfect setup for the torch-wielding mob we can reasonably expect from the plot, yet it’s also part of a plea for respecting science that feels awkwardly wedged into the narrative. Maybe—just maybe—a story based on Frankenstein isn’t the ideal place to try pooh-poohing anti-science anxieties.


The science-fair subplot also kicks off the film’s big finish, as Victor’s classmates give lightning-powered jump-starts to their own dead creatures, with varying degrees of success. And there’s some
wonderfully weird stuff as part of that climax, including the Miracle-Gro-infused turtle created by a Japanese-American student that tramples the town like Gamera, or the mutated “Sea Monkeys” that emerge from a swimming pool like escapees from the third act of Gremlins. Yet it’s also the kind of manic finale that has made so many of Burton’s recent live-action films feel overstuffed and underwhelming. That’s the instinct that has turned so many of Burton’s fans against him: the notion that where his idiosyncratic cinematic worlds are concerned, bigger must be better.


Instead, it’s the quirky little stuff that makes Frankenweenie entertaining, like the wide-eyed weird girl who reads portents into her cat’s feces, or throwaway gags like a pet cemetery tombstone with a distinctive cat-face design engraved “Goodbye Kitty.” Burton could have found time for even more of that sensibility, including the inconveniences that can befall a sewn-together dog—lapped-up water squirting through a seam, for instance—as he tries to go about his doggy business. And maybe he could have built in more interaction between Victor and Burgermeister’s visiting niece, Elsa van Helsing (Winona Ryder), before she has to play a key role in a showdown at the town’s landmark windmill. At times, Frankenweenie does feel like a patchwork conglomeration of pieces, as though it were … oh, I don’t know, an appropriate pop-culture metaphor escapes me.


At other times, though, it’s a glimpse into the creative mind of a filmmaker who has chosen to ignore the blockbusters and remember what it was like simply to lay out his own singularly oddball vision. It feels nice to see that guy come back to life.