Here are some meals that might just scare you 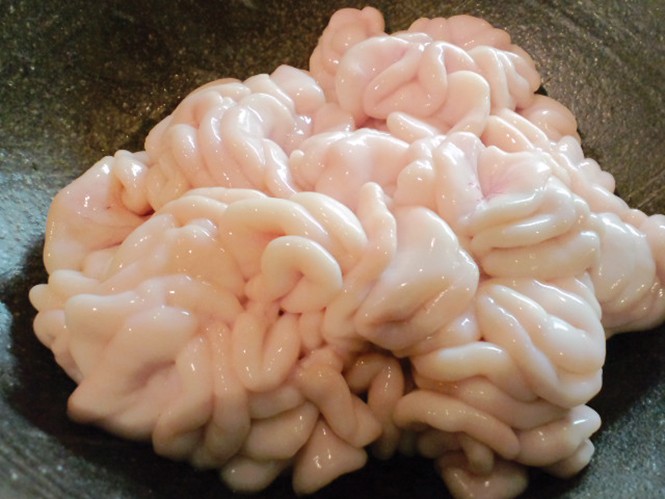 If, as the saying goes, "one man's fish is another man's poisson," then one person's fried tarantula might just be another's pork belly slider. Individual tastes, when it comes to food, are exactly that: individual, and often culturally determined, or at least influenced. Australia's witchetty grubs were a traditional snack for that continent's foraging aboriginal natives, who would probably be disgusted by Cheetos. Many Hindus find the Big Mac to be barbaric. What we eat depends on who we are.

Still, with Halloween in mind, it is fun to see just how freaky you would get with food. What would you eat, and at what point would you just say, "No thanks. Pass. Too scary."? I've eaten grasshoppers, snails, Rocky Mountain oysters, all sorts of offal, jellyfish, 100-year eggs, monkfish liver and other oddities, but I draw the line at monkey brains and the aforementioned fried tarantulas, which are apparently a big hit in Cambodia. Here are some interesting eats—considered perfectly normal in certain societies—you might want to serve at your Halloween bash. Tricks or treats? You decide.

In northern Sweden, surstromming ("sour herring") has been on the menu since at least the 16th century. Now, I don't have an issue with herring, but this herring's odor is so overwhelmingly foul that it's normally eaten outdoors. The fish is salted just enough to keep it from rotting, then fermented for six months or more. Call me a fuddy-duddy, but "ferment" and "fish" seem like two words that don't belong in the same sentence.

If you enjoy pork brains, you might want to try cod milt, to which it is often compared in flavor: soft, custardy and light. But then, you'd probably expect cod sperm sacs to be ... soft, custardy and light. In Japan, milt is called shirako, kiku (oddly, the name of my first pet) or tachi. Now, before you get too high on your horse, you probably wouldn't turn down a scoop of Beluga caviar, would you? And after all, that and the tobiko we love at sushi restaurants are just fish eggs—not that far afield from fish sperm. Milt is best served steamed or deep-fried.

As long as snails are called escargot, we eat the little buggers. So what's weird about eating ant larvae and pupae? Called escamoles in Mexico, they're harvested from agave plants and are a condiment to tacos, especially in Mexico City. They're said to have a nutty, buttery flavor. Other buggy culinary creatures in Mexico include chahuis or xamoes—edible beetles and grubs—and of course, the very popular toasted or fried grasshoppers called chapulines. In Oaxaca, I've eaten chapulines straight, with chile and lime juice, and in a tostada-like construction called a tlayuda. In Korea, a traditional snack is beondegi, or silkworm pupae. Does that bug you?

Americans tend to fear sharks. But your fishy fears might be better focused on fugu. That's the Japanese word for puffer fish, which naturally contains tetrodotoxin, a deadly poison. Chefs in Japan must be specially certified to serve fugu, with at least three years of training learning how to prepare the fish. Strict laws control the fish's preparation in restaurants. The liver is the most poisonous part of fugu, but is also said to be the tastiest, usually served raw as sashimi or as a hot-pot dish called chirinabe. I've never been able to confirm the rumor that some Japanese chefs leave a smidgeon of poison in the fish, to create a numbing or tingling sensation in the mouth. Care to try it? A dozen New York City restaurants serve fugu, with handful of puffer fish eateries scattered around the United States. 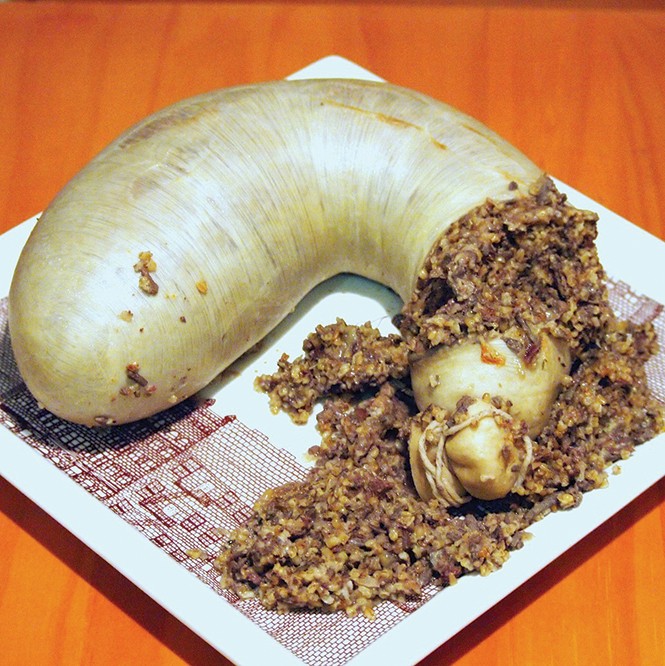 Haggis—a Scottish delicacy—is a hearty savory pudding that contains a sheep's heart, lungs and liver (the mixture is called "pluck"), mixed with oatmeal, suet, spices, salt and minced onion, all wrapped up—here's the kicker—in the sheep's stomach. It's the traditional dish served at annual (Robert) Burns suppers, Jan. 25, and is commonly accompanied by a dram of Scotch whisky. 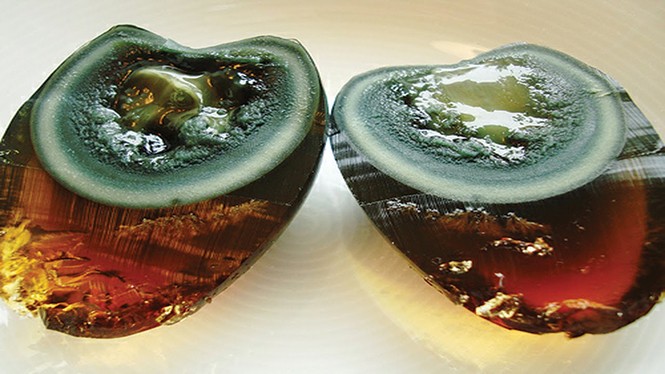 The so-called "century eggs" (pidan) of China certainly look like they've been around for 100 years. The whites of these preserved eggs are dark brown, and the yolks are the greenish color of mold. Also known as thousand-year egg or millennium egg, you'll be relieved to know that they're actually preserved for mere weeks, or, at most, up to a few months. Century eggs have a strong flavor (as you might expect) and creamy texture. Traditionally, they are preserved in clay.

If you tend to eschew the plum wine offered in many Asian restaurants, and are in the market for something a little more robust and hardy, how about snake wine? Throughout China, Vietnam and Southeast Asia venomous snakes are steeped in grain alcohol or rice wine. Good news though: the snake venom is denatured by the ethanol in the wine, so you won't die, but might wish you had.

Live octopus. Now there's a dining challenge. Sannakji is a Korean dish consisting of small octopus cut into pieces—while still alive, and served immediately, usually with sesame oil. While sannakji is typically served in pieces, it can also be eaten whole, which presents a bit of a hazard: Many folks have choked on sannakji—especially while intoxicated. But, how the hell could anyone manage to down a live octopus while sober? There are some awfully fascinating sannakji-eating videos on YouTube.

It's been reported that Americans have been known to eat a 1,080-calorie hamburger from Carl's Jr. called The Most American Thickburger, which appeals to Americans' patriotic spirit, or maybe just our gluttony. It's a beef patty topped with hot dogs and cheese atop a layer of potato chips. Now that's scary!