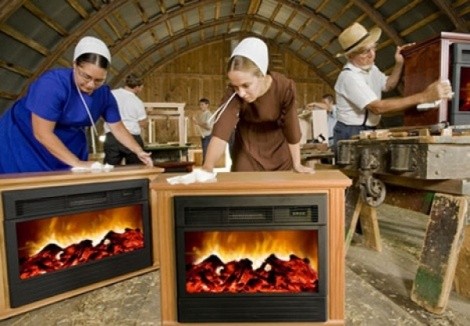 The Heat Is On
Just when you thought you’d missed your big chance, Utahns got another 48 hours to get their “free” heaters from the Amish. The latest full-page newspaper ad came out on Feb. 25. Just a few weeks before that, you were warned again that you had only 48 hours. Despite many Better Business Bureau complaints, sales are hot. The heater—basically a 1,500-watt space heater—got mixed reviews from Consumer Reports, which notes that the heater itself is made in China. No, the Amish haven’t started using electricity, but The New York Times says they do the carpentry on the mantle casing, which, by the way, is anything but free. Look to pay at least $298 for this free item. Oh, and $50 to return it.

Bammes on Leave
You have to hand it to Dan Bammes, KUER 90.1 FM’s Morning Edition host, who helps highlight the fight against cancer even as he continues his own battle with multiple myeloma. Bammes is taking leave from the public-radio station while he undergoes stem-cell treatment at Huntsman Cancer Institute. This isn’t the first time. He had a stem-cell transplant in 2003 that freed him from the disease—a cancer of plasma cells in the bone marrow. Bammes says he expects to return to broadcasting in July—a testament to his will to beat the disease. His profile on KUER’s staff page emphasizes his cause: “Dan is also a cancer survivor who spends much of his free time connecting with and supporting other patients with multiple myeloma.”

Eagle Forum Inventors
When you hear the name Phyllis Schlafly, you might not be thinking patent law. But the founder of the national Eagle Forum is making her opposition to a “first to file” update to patent law a conservative issue—so much so that, according to The New York Times, she’s brought Gun Owners of America and the Christian Coalition of America on board to battle this arcane legislation. But she’ll be taking on one of the sponsors: Sen. Orrin Hatch, who’s been seeking this change for years. In a nutshell, the bill would change the system from “first to invent” to “first to file.” Critics of the old system say that “first to invent” simply directs filers into court, but “first to file” will encourage big companies to overwhelm the system by filing for everything. The whole thing makes you wonder what the Eagle Forum wants to patent.