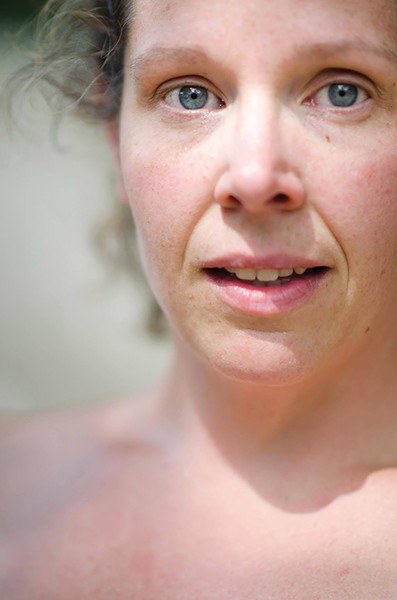 Coincidentally—and fortunately for Ungerman's fledgling Sackerson Theatre Co.—early 2015 was also when Westminster College theater faculty members Michael and Nina Vought were launching the Great Salt Lake Fringe Festival. Inspired in part by the Edinburgh Fringe Festival—which celebrates its 70th anniversary in 2017—the Voughts looked to create a place where Utah artists could gather and experiment with their craft. For Ungerman, who had experience attending and participating in the Edinburgh Fringe Festival, it was perfect timing.

"It gave us a great opportunity to kick off our first production," Ungerman says of that 2015 Fringe Festival show, Morag Shepherd's Poppy's in the Sand. "It took place in what used to be a loading bay of an old Deseret Industries building. That particular room was pretty small and intimate, and allowed us to bring 300 pounds of beach sand, which is something a lot of theater spaces wouldn't have been happy with."

Ungerman and Sackerson return in 2017 for the third annual Great Salt Lake Fringe Festival with another play by Shepherd, Do You Want to See Me Naked?, one of 50 productions that will fill both traditional and makeshift spaces at Westminster College, Sprague Library and, yes, that old DI building. The opportunity to do unconventional things—even if they don't require hundreds of pounds of sand—is only part of the appeal for the artists who will stage plays, monologues, musicals and more over the 10-day event.

"People who are trying to develop new work often don't have access to space," says Jay Perry, a local actor working on public relations for the festival. "Space can be a big challenge. There are a lot of really talented people here who have lots of great ideas, but haven't had a place to launch those ideas."

It's a particularly good place for artists like Sadie Bowman and Ricky Coates, who relocated their Matheatre company—which creates shows built around scientific concepts for high school and college audiences—to Salt Lake City last fall. "The first thing we did," Bowman says, "was find out whether there was a Fringe Festival here, because we've toured to other Fringes. ... 'Do they have a Fringe Festival? Awesome!'"

Bowman's and Coates' new show, which premieres at the Great Salt Lake Fringe Festival, is Curie Me Away, a musical based on the life of pioneering scientist Marie Curie. Any new show is a risk, and a venue like this is a way to help mitigate that risk. "It's a very cost-effective way to do it," Coates says, "because to go out and rent a theater, hire technicians, that's a lot of money getting sunk into that. Especially for touring companies, the Fringe Festival has the efficiency of facilities, you have the infrastructure there."

"Plus," Bowman adds, "as the new kid in town, you can ask other people, 'Does anybody know where I can get some plastic radishes? I'm new here.'"

Perhaps even more important, however, is the opportunity simply to find an audience—one that is generally open to something new and innovative. "We want feedback," Bowman says, "because this show is a baby. It takes a lot of performances, a lot of iterations, to figure out what works, what can be cut, what can be improved. You can't get that without an audience. For me, that's the main thing. Fringe audiences, in my experience, are really approachable. The wall between audiences and artists dissolves."

That doesn't necessarily mean there's time for actors to chat with attendees from the stage after the show. Like all of the Fringe artists, Bowman and Coates are working within tight logistical parameters: a 60-minutes-or-less show, with 15 minutes to load on before and 15 minutes to strike the set after. Those efficiencies of scale mean packing a lot of art into the available spaces in a limited amount of time.

For audiences, that means a chance to sample a tremendous range of work, operating outside any predictable parameters, and getting a chance to interact with the artists in more informal ways. "The word of mouth at a festival, when the energy is good, audiences talk to each other," Bowman says. "The potential for energy at a festival like this is something you just don't have in a regular theater season."

Of the festival works, Perry says, "There are really no rules, and anyone who is performing is not necessarily beholden to subscribers, or one particular aesthetic. It just allows people to do whatever they want to do, and see what sticks.

"It's un-adjudicated, unrestricted, and when you put those two things together, it allows people to really explore."