From Here to Maternity

Unpregnant tries to find road-trip comedy in a serious subject. 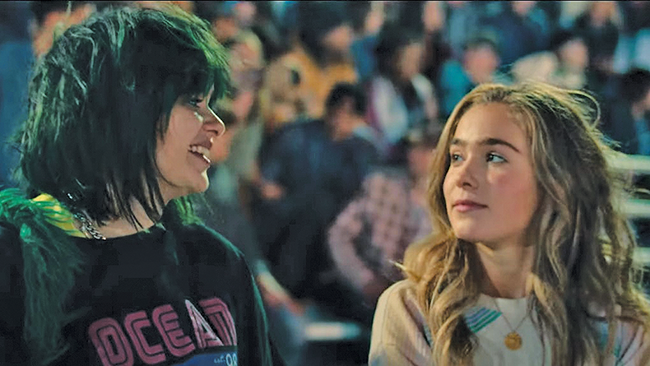 It's tempting to look for some grand cultural explanation for why a particular notion becomes the premise for multiple movies within a short time span. Were we more anxious about high-school students having weird misadventures with technology in 1985, when Weird Science and My Science Project were released? Or more prone to apocalyptic thinking in 1998 when celestial objects threatened the earth in Armageddon and Deep Impact? Sometimes a coincidence is just a coincidence, but humans are wired to look for patterns—so should we be curious why 2020 has given us two films about pregnant 17-year-olds forced to take a road trip to another state to get an abortion denied to them by law in their home state?

That's a perfectly valid question, but there's a more challenging question at the heart of thinking about Unpregnant. Because while Never Rarely Sometimes Always—Unpregnant's Sundance-bona-fide precursor in dealing with a reproductive-rights journey—has already been justifiably lauded as one of the year's most powerful dramas, it's considerably easier to take on this subject while taking it absolutely seriously. Unpregnant, meanwhile, plays things mostly for laughs. Is it possible to find the balance between a messy, controversial subject and a lighthearted tone, in which that messy, controversial subject isn't even necessarily the main point?

In this adaptation of the young-adult novel by Jenni Hendriks and Ted Caplan, Haley Lu Richardson plays Veronica Clarke, a Missouri high-school senior with a wall full of academic awards, valedictorian status and an acceptance letter to an Ivy League school. She also has one other thing: a positive pregnancy test, which threatens every life plan Veronica has. With abortion unavailable to a minor in her state without parental consent, Veronica contrives a plan to take a 1,000-mile trip to Albuquerque, New Mexico, the nearest place that will allow her to get the procedure. And that plan requires her to enlist the assistance of Bailey (Barbie Ferreira)—once Veronica's best friend, though the two have been long-estranged—to drive her there.

For a while, Unpregnant most closely resembles The Sure Thing in the bickering interplay between our reluctant road-trippers, with Veronica counting pennies and managing the itinerary while the more free-spirited Bailey wants them to make a stop at Roswell. In an old-school romantic comedy, it's the classic "opposites attract" setup, where the Type A personality learns to loosen up and the Type B personality learns a little more responsibility. And indeed, this is a kind of love story, albeit of a more platonic kind, and the two leads are both solid at conveying both what connects Veronica and Bailey, and what pulled them apart.

The challenge is offering up this relationship in a narrative that has as its ticking clock Veronica's need to have her abortion appointment in enough time to get back home without her parents knowing. That notion seems doomed from the outset, as Veronica informs her dimwitted boyfriend, Kevin (Alex MacNicoll), about the pregnancy, and his reaction makes it seem pretty clear that Veronica's delicate condition will never remain a secret. But the story still needs to throw up plenty of obstacles in Veronica and Bailey's way, including fleeing from the police and encountering a smiling couple (Breckin Meyer and Sugar Lyn Beard) whose intentions are clear from the outset. When Veronica gets a chance to pause in the middle of it all to deliver what is clearly one of Unpregnant's thesis statements—screw the state legislature that forced her to go through so much trouble!—it's almost jarring to remember that there's something serious at the heart of all these shenanigans.

Tone, ultimately, is what makes it hard for Unpregnant to work fully as either a comedy or as a social commentary. A late scene in which Veronica has a difficult conversation with her staunchly Catholic mother (Mary McCormack) might have packed a punch, if there had been literally any previous substantial interaction between the two indicating what kind of relationship is at risk to Veronica for making this choice. Not unlike many adolescent narratives, the primary character arcs for its characters are about learning to risk rejection in order to be their true selves. As important as that idea is, it's hard to make the sensitive side of this concept work, while still making a movie with car chases and Mike Pence punch lines. CW