New downtown eatery lives up to its name with pizza perfection 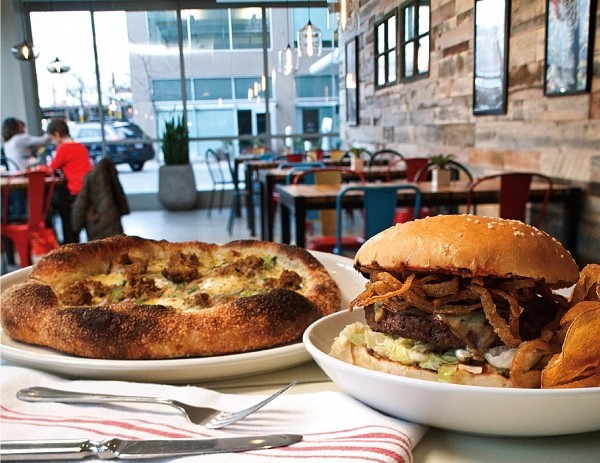 For the past few years, I’ve noticed that more and more restaurant menus are littered with terms like “homemade,” “housemade” and “from scratch.” You’ve probably seen the same. More often than not, these wholesome-sounding descriptions are accompanied by the adjectives “artisan,” “local” or “craft.”

OK: We get it. You want us to know that your coconut shrimp didn’t come from a refrigerated Sysco truck, stopping only at the restaurant’s microwave or deep-fryer on the way to my plate.

Generally speaking, I support the slow food/artisan/local/craft food movement—but not always. We are indeed lucky to have world-class artisan food producers here in Utah such as Creminelli Meats, Beehive Cheese, Amour Spreads, Happy Monkey Hummus and the like. But you’re not going to find fresh lobster in the Great Salt Lake, and please don’t tell me that the water you used to make my expensive cup of tea came from your own spring out back.

The point is, I’d venture to say that there isn’t a restaurant on the planet that makes everything “from scratch.” What about the salt and pepper? Did you make those, too? Well, although I’m both leery and weary of “from scratch” restaurants, I couldn’t really resist one that’s actually called From Scratch, could I?

My first visit to From Scratch—which is located on a lightly traveled avenue just behind Gallivan Plaza—was a surprise. The place was mobbed; I hadn’t allowed for the Outdoor Retailer effect. So, my wife and I were seated—with apologies—at the counter, with good views of the wood-fired pizza oven and prep stations. Not a problem: I’m not above eating at the bar.

And a very attractive bar it is. The wood used for the counter and some of the walls was reclaimed from a barn in Idaho. The chairs are antique metal cafe chairs in a kaleidoscope of colors. The owner, David Brodsky, says he found some of them on eBay. The restuarant is sleek and modern, with clean lines, but very comfortable, too. I think of it as cozy contemporary. And I really like the big communal table in the center of the eatery.

I also like the menu, which is limited to a couple of appetizers, a handful of soups and salads, pizzas and pasta, and a couple of entrees. I visit way too many restaurants where the chef has bitten off more than he/she can chew—or cook. Similarly, the beer and wine selection isn’t vast, but the small, well-chosen list offers some interesting options and good values.

Seeing that the restaurant was busy, and assuming it might take a while to get our food, we ordered a bottle of Vitiano Bianco ($6/glass or $30/bottle) and a scrumptious-sounding risotto cake appetizer ($6) to split. To our surprise, the risotto cake arrived quickly. Sadly, it was nearly inedible. I could tell that the generously portioned risotto cake had a lot going for it. It’s a disc of Arborio rice the size of a 45-RPM record, breaded and fried until crisp and golden (think saucer-shaped arancini) on a puddle of roasted bell-pepper sauce, topped with fresh wild arugula and shaved Parmigiano-Reggiano cheese. Sounds yummy, right? Unfortunately, someone had sprinkled so much coarse sea salt on the rice cake that we couldn’t eat it and had to send it back—something I rarely do in a restaurant. Our server—who was very good—apologized and removed the offending risotto cake from both our table and our bill. No harm, no foul.

I’m nearly always disappointed in Margherita pizzas at American restaurants. But, ever the optimist, I ordered the From Scratch version. Well, it turns out that the pizza really is made from scratch. And that includes even the flour, which is ground from organic hard spring wheat berries on the premises in a wooden Austrian flour mill. The sourdough used for From Scratch’s pasta and the cornmeal used for pizzas is made in-house. So is the hand-pulled mozzarella, and even the butter and jam.

Well, about that Margherita ($13): It was magnificent—easily the best wood-fired pizza I’ve eaten in Salt Lake City. It’s simple, nothing more than that fresh-made flour, housemade mozzarella, Bianco de Napoli tomatoes and fresh basil. The crust was glorious: nicely puffed, with lightly charred dough bubbles around the edges, just the right amount of sauce, and mozzarella melted to perfection. The secret to pizza-making at From Scratch is, I learned, that they cook their pizzas at a much lower temperature than most wood-fired pizza places—about 450 to 500 degrees. This allows the crust to cook to perfection and the cheese to fully melt. Another pie—this one with housemade fennel sausage, mozzarella, red and green onions, and creme fraiche ($15)—was equally stupendous.

On my third visit, I ordered the risotto cake again, and this time it was perfect. The kitchen either listened and heard my complaint, or the over-salting was just a fluke on a very busy night.

A couple of other great From Scratch dishes: the pumpkin-stuffed homemade ravioli in brown butter ($16) was outrageous; unfortunately it’s since been taken off the menu, with pumpkins now out of season. The biggest From Scratch surprise, however, was the Scratch burger ($13). As with the Margherita pizza, I don’t know that I’ve ever had a better burger. It’s a huge, juicy beef patty topped with Gold Creek Farms smoked cheddar, shoestring onions, lettuce and housemade ketchup, with a glistening, sesame-seed bun that’s  made, of course, in-house. Be sure to also ask for the housemade mustard!

Summation: This is one restaurant that, when it says the food is from scratch,  means it.