Masters of the Fu-niverse: SoCal's Fu Manchu are totally tubular. 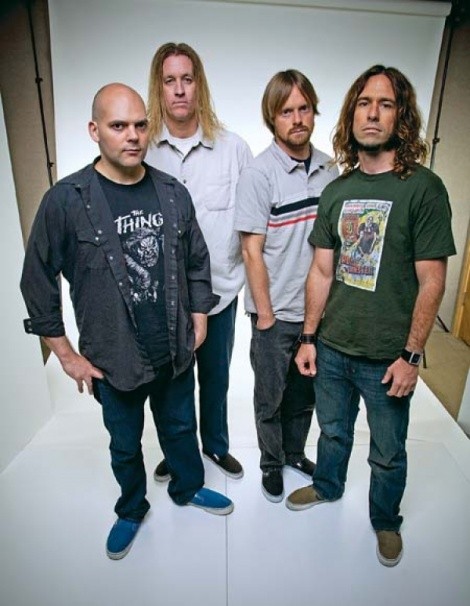 Though their name refers to a mustachioed celluloid villain, Fu Manchu are more like Jeff Spicoli, Ron Slater, and David Wooderson. They symbolize the older, ostensibly cooler, dudes we grew up around—or saw in Fast Times at Ridgemont High and Dazed and Confused—and wanted to emulate, because they had the laid-back demeanor, cool car (or custom van) and mystical manner of attracting women. Fu frontdude Scott Hill concurs, to a point.

“As a young kid in the ’70s, there was always that older dude livin’ on your street, the guy, 18 years old, with a custom van painted all nice, surfin’, skatin’. That was the dude you wanted to be,” he says. “That was The Guy.”

Like Spicoli, Hill lived near—nay, at—Southern California beaches his entire life. His older sisters surrounded Hill with similar role models. “I’d always be around the long-haired stoner dudes,” he recalls, “and I looked up to them.” That’s why Fu Manchu’s music—generally labeled stoner rock—is silly with references to muscle cars, custom vans, babes, pinball, skateboarding, marijuana and far-out space shit. But, Hill says, “That’s just how I grew up. It wasn’t like, ‘Hey, I’m gonna cop that image’; it’s what I know.”

That palette has served Fu Manchu well in their 20 years together, because we relate to those arc-stereotypical denizens of the Fu-niverse. Whether we’re like them or not, we relate to those crazy stoner dudes and their puff-puff-passive resistance to authority (Spicoli), skewed worldviews (as Slater said, “George [Washington] toked”), and cool confidence even in the face of their own douchebaggery, as with Wooderson’s appraisal of jailbait: “I get older, they stay the same age.” Pinball, skateboarding, sex, drugs and sci-fi are just cool. And when you set that stuff to music—fuzzy, 4/4, hard rock—it’s like thunder from the mountain, the Word of God.

Hill remembers the thunder that resounded around the beach: “They’d always be blarin’ Deep Purple, Ted Nugent, Kiss. That’s where I got exposed to music, early on.” His biggest musical epiphany, though, came in 1980, when a friend showed up with a cassette tape that veered the custom van off its course. The blank tape had “live Circle Jerks on one side and live Black Flag on the other. I’d never heard punk before, and was like, ‘What’s this?!’ The singer was drunk, slurring words. It was just fast, and loud… the sound of the guitars and the aggressiveness. And I liked the real short, to-the-point songs.”

His friends experienced the same reaction. ’70s rock was summarily dismissed from their minds, at least for a while, as they laid waste to their wax stacks. “My friends would skip their old Kiss records down the street,” says Hill. “I was smart; I put all mine in the back of the closet. But I sure enjoyed throwin’ theirs.”

Soon, the beach morphed into something different, with a new soundtrack and slightly different heroes. Hill immersed himself in punk rock, sneaking out to shows and pestering record stores about their punk sections. By 1985, when he became the older guy on the beach, starting his own band, he was pure punk. Virulence released its first album in 1989, but by then Hill heard a new sound that brought him full circle back to that 1970’s beach.

“I started hearin’ Tad and Nirvana,” he says. “The rawness of it reminded me of punk, but it was slowed down.” When personnel and their name changed—here is where they became Fu Manchu—the band gravitated toward a new sound. “I wanted to slow down but still keep the songs short.” The monolithic, groovin’ music Fu Manchu came up with became its trademark, and the band built a following alongside musical kindred spirits Kyuss, Monster Magnet, St. Vitus, The Melvins and Clutch. Twenty years later, as Fu prepares to release their tenth album, Signs of Infinite Power (Century Media), they’re as strong as ever.

It’s because Fu Manchu hasn’t created a sound so much as a fully formed identity. We know, from listening to songs like “King of the Road,” “Boogie Van,” “Ojo Rojo,” “Regal Begal,” “Neptune’s Convoy” and “El Busta” that their muse is constant and a reliable source of escape, perhaps to sunnier days when we still had someone to look up to, and we anticipated the spoils of adulthood with bated breath. Maybe it’s not realistic to live our entire lives as Spicolis and Slaters and Woodersons, and we don’t have a kickass custom van with dingle balls and a waterbed in the back; we’ve grown up. But for three or four minutes at a time—or 90 minutes, if you’re hittin’ the Fu Manchu show on Sunday—we can pretend.

Music Artist Profiles Dazed and Confused That this theirs