A quiet, 25-year art project on I Street is nearing an end. 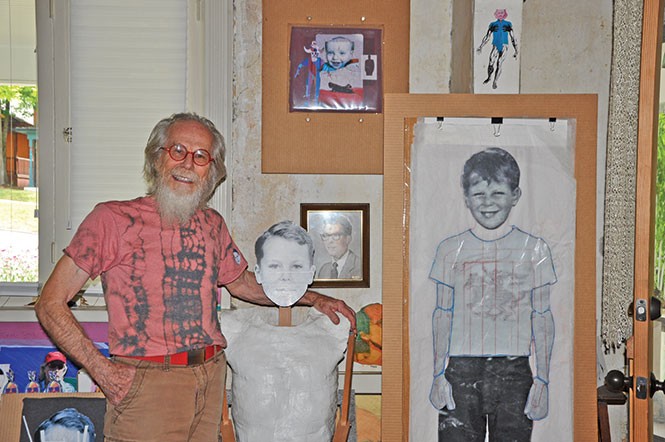 There's Jim, a cutout of his head stuck to a popsicle stick protruding from a vase on the top of a kitchen cabinet. There is medium Jim, chilling on the right side of the couch, leather gloves on his hands, just a few feet away from old Jim, sitting in what appears to be a wheelchair. Guarding the front door is young Jim. Jim, Jim, Jim, everywhere.

For 25 years, Jim Williams, a retired architect and an ambitious artist, has quietly turned his home at 265 I St. into an ever-changing piece of artwork, with the home's primary occupant as the main subject.

Williams' home is a bulging self-portrait of a man and the space he occupies. And, as all efforts must, Williams' most expansive piece of artwork, comprised of thousands of individual pieces, is entering its final act.

After a handful of tours, limited to 10 people and facilitated through the Utah Museum of Contemporary Art conclude this fall, Williams, 76, intends to put his collection in storage and, by spring, sell his home.

"The house, with the collection, is the final art piece," Williams says.

For much of Williams' artistic life, he worked in obscurity. A self-described hermit, his efforts at home didn't gain public attention until 2011, when local artist Cara Despain wrote a book, The Beginning of Now, about Williams and his home. In an exhibit of the same name, Despain and Williams recreated a portion of Williams' home in a gallery.

For Despain, the conclusion of Williams' long project has sparked efforts to preserve the collection. She says some interest has been expressed by Utah museums, but in a perfect world, someone would step in, buy the home and keep it open as a museum.

This latter scenario is what Mary Toscano, Williams' studio assistant, hopes to see. "I think that someone should buy the whole thing and keep it as an art piece," she says. "I want the house to be an artist destination site, like Spiral Jetty."

On the surface, a home filled with photos and art installations of Williams, who has a wispy white beard, red Coke-bottle glasses and stands 5-feet, 1-inch tall, might not sound artistically glorious. But Williams and his home—inseparable in this context—are just that. The depth of the art, which in some places includes numerous iterations of different pieces (Jim's figure is cut from a photograph, the cutout itself is a shadow silhouette of Jim, which is glued to a surface and then a photo is taken of the new surface, spawning a deliberate and intricate series of art) can be like jumping down a rabbit hole.

While the result might seem narcissistic, Despain says Williams' fascination with self portraiture is not the fruit of an outsized ego, but blossomed from the fact that for much of the past two decades, Williams lived alone in the house. And many of the pieces, Despain says, incorporate Williams' family and friends.

"He almost imagines himself or that person as part of him and they get absorbed into his portrait," Despain says. "I think it's just sort of his entire life that he's reflecting. That's what he has to work with, is himself and his life and anything that comes into contact with that."

Williams says he arrived at self portraiture incrementally. In 1981, his line drawings were shown in a gallery in New York City. "They just got no attention at all," Williams says, remembering that he decided to migrate to a different side of the art spectrum. "I said, 'OK, I'm going to do large, colorful [pieces] with a theme."

Williams began painting a series of bright portraits, but he ended up in every one of them. These double portraits then set Williams on the path of photography and portraiture that has consumed his artistic endeavors, and his home.

There is an element in Williams' art, he says, that grapples with the loss of innocence. For Williams, he says his loss of innocence, which by his definition involves the time at which children begin to act and speak with motive, occurred around the age of 9. It is Williams' face from age 9, known as young Jim, which pops up frequently around the house.

"When I think of myself, my internal vision of self, that's what I see," Williams says of young Jim.

Williams' small frame has always been a marked personal characteristic, and during his school years, it bred an insecurity that, partly through cathartic moments in his art, has completely eroded. In this arena, Williams says, his work has been a "way of accepting self."

To the trained eye, there are sparks throughout Williams' home that are reminiscent of popular artistic periods, or individual artists. Because many of Williams' creations occurred in isolation, Despain says she has been surprised by the period aspects present in the pieces.

"You still see bits and pieces of the art world at large," Despain says. "It fits in even though it stands apart, if that makes sense, and I just think it's important work."

If Williams does end up packing his collection into boxes and selling the home, some art installations will remain. On the kitchen floor, which Williams remodeled a couple of years ago, is a painting, interspersed with his picture, which he says illustrates his relationship with the potter, Jim Stewart, whose work appears throughout the house.

Williams says he and Stewart are camping buddies, and there are flashes of red and yellow across the floor to perhaps symbolize a campfire, while the streams of conversation appear to assemble in the far corner, near a two-person table, and spread out from there.

While some of Williams' pieces appear simplistic, Despain says that Williams' process is meticulous to the point of obsession. When he makes changes to an installation, Despain says the change is catalogued and written down. Similar record keeping is done with postcards and letters: A copy is always made.

A fan of T-shirts, Williams says he's created hundreds over the years, all of which incorporate his self portraits. On a warm Wednesday morning, as he sanded a piece of plywood in his driveway, Williams wore a faded tie-dye shirt, a picture of young Jim ironed onto the left sleeve.

Originally from Kansas, Williams says he comes from farmer stock—the origins, he says, of the compulsive, hardworking and project-oriented side of himself. These traits, he says, propelled him through a career in architecture and have kept him on task over the years.

By spring, he says he'll be renting an apartment near his daughter and grandchildren, in Portland, Ore. The walls, he says, will be blank—a contention that Despain says is absolute "bullshit."

In Williams, Despain says she sees a pure artist, one who has constantly created artwork with no effort to show it or to sell it. This trait, she says, "the sheer dedication and depth of it, and the way that he was doing it in spite of being an outlier," is what makes Williams so special.

Williams imagines that he'll miss creating self portraits, and he'll miss his home; the fully grown fruitless mulberry tree he planted on a sweltering day four decades ago, the 1930s-era garage that he turned into a studio and greenhouse and every other corner of the place that has become as much a reflection of Williams' psyche as it is a home.

What Williams will do with new white walls in Portland is anyone's guess, but it will most certainly be another chapter in the man's life, making itself ripe for interpretation.