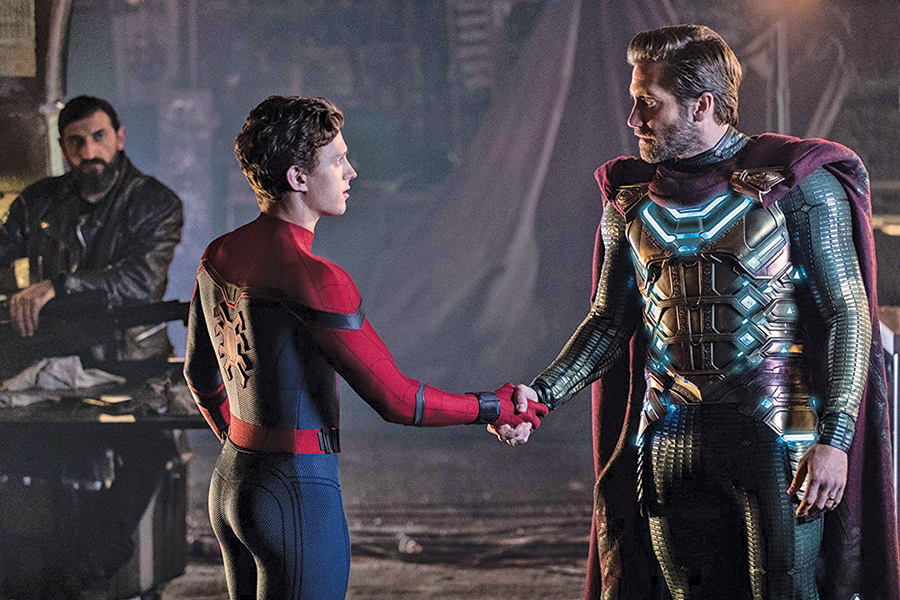 When we first met Tom Holland's incarnation of Peter Parker—recruited by Tony Stark in Captain America: Civil War—he was already deep into the philosophy of what it means to be a superhero. "When you can do the things that I can," he tells Stark, "but you don't, and then the bad things happen? They happen because of you." It's a wordier version of the oft-quoted sentiment that has always undergirded the Spider-Man mythology—"With great power comes great responsibility"—and it's a big part of what Peter is wrestling with in Spider-Man: Far From Home. He's just a 16-year-old kid, who wants to do the things most 16-year-old kids get to do: fall in love, hang out with friends, etc. How do you balance fate-of-the-world stuff with, you know, having fun?

As it happens, that's the same question director Jon Watts has to wrestle with in making Far From Home a de facto epilogue to Avengers: Endgame. He and his screenwriters have to set up the world with the returning half of humanity previously erased by Thanos in a way that inspires more mirth than pathos—a high school band suddenly materializing in the middle of the gym during a basketball game—lest this whole thing be bogged down in angst and the logistics of how all of these people are still high school classmates when some of them have lived an additional five years. The expository intro, in the form of a clumsily sincere "In Memoriam" video to the deceased Avengers and morning announcements at Peter's high school, amounts to a plea that we move along, nothing to see here.

And it's easy enough to comply, as the focus falls on Peter and his closest cohorts—best friend Ned (Jacob Batalon), thus-far-unrequited crush MJ (Zendaya), et. al.—taking a school-sponsored trip to Europe. Peter has a meticulously-crafted plan for making his romantic move on MJ, and it's here that Far From Home is at its most engaging, continuing the John Hughes-ian teen comedy vibe that energized Spider-Man: Homecoming. Holland remains a winningly awkward presence when he's playing Peter, a nice guy trying to figure out if his moral code allows him to put getting the girl ahead of saving the world.

That's a choice it appears he'll have to make when Nick Fury (Samuel L. Jackson) appears and requires Spider-Man's assistance. It seems that a warrior called Mysterio (Jake Gyllenhaal) has made his way to our dimension from an alternate reality, trying to save us from the threat of monstrous Elementals that have already destroyed his version of Earth. Gyllenhaal brings a satisfying charisma to the role of a character who has to stroll around in a purple cape wearing a globe full of green gas on his head, but the action sequences are where the Marvel movies often tend to lose sight of their distinctive components in favor of generic spectacle. At a certain point, a battle between someone in tights and a giant magma beast or a living waterspout starts to feel like something you saw just a few months ago.

It gets even clunkier when it begins to feel that Far From Home is trying to get topical on us, inserting pointed references to fake news and to the notion that people are easily duped into believing that there's a threat from which they need protecting. That's a lot of weight for a movie that already feels obliged to reference its post-Endgame position at every opportunity—this movie might as well have been called Spider-Man: Tony Stark Sure Was Awesome, Wasn't He?—and to serve the Marvel brand as a summer blockbuster. If there's a story to be told in the super-hero universe about how we respond to demagoguery, this one probably ain't it.

This is, however, pretty satisfying when it leans into human comedy, along the lines of the more light-hearted, lower-stakes MCU efforts like Ant-Man; if nothing else, it's delightful watching Peter trying to wrap his brain around a possible romance between his Aunt May (Marisa Tomei) and Happy Hogan (Jon Favreau). There's no way this movie can compete with the near-perfection of Sam Raimi's Spider-Man 2 when it comes to exploring the tension between heroic duty and personal happiness, but that's an awfully high bar. While Peter might understand his great power and his great responsibility, we just want to see him have fun.