A scholarship for the children of incarcerated parents struggles to gain traction with inmates and the prison. 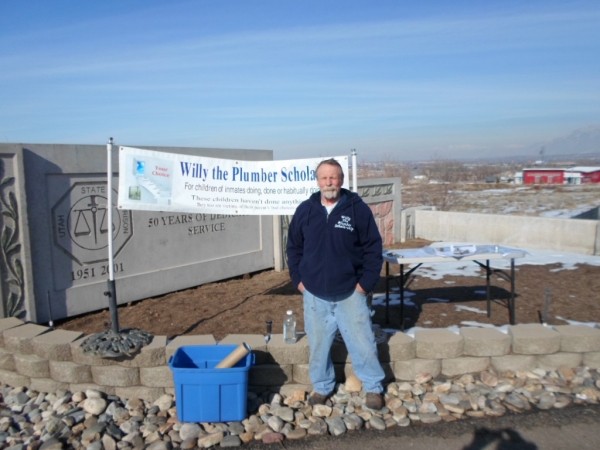 Utah State Prison inmate Brian Maguire knows how important the Willy the Plumber scholarship can be for the child of an incarcerated parent. Maguire’s son has never forgiven him for “not being there when he was growing up,” Maguire says today in a prison visiting room. While his son’s friends regaled one another with stories about various adventures with their fathers, all Maguire’s son had was the memory of pushing chairs around as if they were cars while his parents talked. “He grew up in the prison visiting room,” Maguire says.

If the scholarship had existed when his now-adult son was a teenager, he says, it “might have helped him get over that hump of shame” that having an incarcerated father gave him, and perhaps propelled him to college. The indigent Maguire can’t make amends to his estranged son, but, he says, “I can [pay] it forward so that other children might see the possibility of being more than they think they might be.”

Former inmate Karl Winsness founded the Willy the Plumber scholarship fund three years ago. He had hoped that some of the Utah State Prison’s 6,000 inmates would share Maguire’s enthusiasm and donate their time or the few dollars they could gather from earning 40 cents an hour at the prison. If Winsness could get half of the inmates to contribute $2 once or twice a year, he wrote on the fund’s website, “I could also throw in another couple thousand each year, God willing and my health holds up.” But thus far, inmates have contributed $15.

Winsness admits to bafflement. “This is for their kids.”

The prison’s support has been equally low. Winsness expected that the institution would help by spreading the news about a cause that could potentially impact the cycle of incarceration. But instead, prison officials have largely spurned his pleas for support.

Jerry Pope, the head of institutional operations at the prison, says the lack of donations by inmates is not necessarily surprising. “The issue may be they don’t know [about the fund] or they don’t want to. If I don’t have kids or don’t care about my kids, why would I donate to a former felon or somebody else’s kid?”

It’s not so much an issue of what the Department of Corrections does or doesn’t do to support the fund, he says, as the fund being “a tough sell to offenders, particularly when offenders’ families are already struggling.”

When Winsness started the fund in 2011, prison officials were more enthusiastic. Winsness posted a May 2011 e-mail on his website from Craig Burr, a director of prison programming, who wrote that while the scholarship would not be sponsored by the Department of Corrections, promotional material could be posted in visiting rooms as long as it was pre-approved by the prison.

A month later, however, Burr wrote in an e-mail that the department had “decided to deny your request to display flyers and posters at UDC facilities,” Burr wrote, suggesting that Winsness instead distribute flyers to school districts.

But Winsness says posting flyers in the visiting rooms was crucial to inform both inmates and their children about the scholarship. Why mail thousands of posters to schools and community centers across the state when he could reach the families he needed to by posting a dozen flyers in the prison’s visiting rooms?

Unable to get the word out, in late February 2012, just days before the scholarship-application deadline, a desperate Winsness handed out flyers at the prison in the hope of catching relatives visiting inmates. But after several hours, the prison told him he had to move to the park & wait 200 yards away, as he was theoretically a traffic problem.

Inside the prison, inmate Maguire also had little luck promoting the scholarship. Maguire—who after violating parole nine times is now in for life—is indigent and disabled after a stroke in prison. He says that he knew that for the fund to succeed, he had to secure prison cooperation.

Deputy director of administrative services Mike Haddon responded to Maguire’s first inquiry with heartfelt excitement in a November 2012 letter. While it wasn’t a commitment to support the program, Haddon noted that Maguire had caught his interest and “reminded me of the good people can do, whomever or wherever they are.”

Maguire was allowed to post flyers in the Oquirrh section of the prison he was housed in, but found his promotional plans to raise funds from the inmates—such as organizing a picnic-like “spread” that inmates would pay to partake in—were not getting anywhere, and his flyers were taken down.

He met with deputy warden Larry Bussio a year later to discuss his plans, but was informed in a subsequent letter that “the department could not be a middle man in handling donations,” although officials were still willing to “brainstorm on logistics.” Bussio also noted “there cannot be any activity that may lead to the perception of strong arming [donations] like the ‘spread’ you mentioned.”

Maguire says he fears that there may be “an actual reluctance in the institution to support something a former inmate has created.”

But Fraser Nelson, executive director of the Community Foundation of Utah, which administers the fund’s finances and selects winners from the applicants, says that the obstacle may rather be prison bureaucracy. “I think things get gummed up in the Department of Corrections all the time,” she says. She doesn’t think the prison is opposed to the fund, but “it’s just not a top priority. A lot more could be done to create increased awareness among inmates and friends and families.”

Pope says the fund is “an awesome idea.” Pope was running Uinta—the maximum-security wing of the prison—when he got to know Winsness as an inmate, and praises him as “one of our success stories.”
“If Karl can make it work, that’s phenomenal,” he continues. But there’s a key difference between supporting the fund and endorsing it, he says.

“The biggest problem we’ve run into is what we do for one, we’ve got to do for all,” Pope says. “We are in the business of keeping this institution safe. Part of me wants to help Karl, but if we do it for him, how can we not do it for everyone else?”

While Maguire’s efforts have thus far borne little fruit, an advocate Winsness found for the fund in the woman’s prison has made some headway. Jenny requested anonymity, as she did not want further publicity for her sex offense impacting her victim.

“Jenny,” like Maguire, views the fund in personal terms. Her memories of growing up while her mother, father and stepfather were all in prison on drug charges make her cry. Children of incarcerated parents, she says, “have no direction. They don’t have role models to look up to. They’re on their own.” Jenny says she became an adult at age 14, when her parents went to prison; after that, she moved from one house to the next as she descended into drug addiction. Every child of incarcerated parents, she believes, “has abandonment issues.”

Initially, she says, she too encountered resistance to putting up flyers Winsness sent her. But now, she says, her caseworker, unit captain and lieutenant “all think it’s great.”

Jenny hopes to raise $100 or more from the 143 inmates in her unit at a July 4 walkathon in the main yard.

Like Maguire, what draws her to the fund is the possibility to give back, “if not to my own child, then to others, so that they do not go down the road I picked.”

The fund “will get bigger,” she predicts. “Everything takes time in here.”

Nelson says the desire to give back is universal, “and just because people are in prison, they shouldn’t be denied that opportunity. I’m not saying they are denied it by the prison, but they haven’t made it any easier.” The Department of Corrections, she says, simply needs to “figure out how to make it work.”

Whatever the reasons for the fund’s struggles to grow, Winsness knows that within the walls of Utah’s prison, achieving success ultimately comes down to a track record. “Usually in prison, you have to prove yourself before other inmates will back your play,” he says.