Milk Money
Milk Every Minute of Quarantine
It seems insane that we're already a month into coronavirus quarantine, but that does appear to the case, made apparent by the music video recently dropped by local band Milk Money. Since the pandemic hit home, they've been busy as hell finding ways to entertain and support their corner of the local music scene.

Band member Trevor Hale says it all started with a desire to help their pals at Gold Blood Collective, who are suffering from the loss of cancelled shows. GBC runs a printing press out of the venue, and Milk Money began by commissioning an exclusive run of merch to contribute some cash to the venue. But they also kept brainstorming more ideas. Members of Milk Money used to run a music blog, Hale recalls, so they decided to start a humorous advice column titled "Who the Fuck Do You Think You Are?" on all topics hardcore scene, hosted by the GBC blog. The first few weekly-on-Friday posts are pretty damned funny, even to an outsider.

"The quick turnaround was helped a lot by the fact that we were all bored," Hale says. "It seemed like a lighthearted way to entertain people for a few minutes, which is what we're all about anyway."

They also provided entertainment by whipping up a music video in basically a day. A stitched-up piece inspired by The Brady Bunch, their video for "The Human Spine" is a compilation of clips filmed at their separate homes; certain guitar parts were recorded between aftershocks from last month's Magna earthquake.

With a little fast editing, it was done a day-ish later. Anyone looking to be productive during this time can take a few cues from this band and see the fruits of their labor at facebook.com/milkmoneyrock, and have a few laughs (we all need 'em) over at goldbloodcollective.com/blogs.

If that describes you, have no fear, because SLC solo acoustic act Alicia Stockman has us all covered with her ingenious happy hour concert series. Stockman started it at the beginning of April, and a video record of that first live stream remains on her Facebook page (facebook.com/aliciastockmanmusic). She treated approximately a thousand viewers to around an hour of her sweet, simple voice and the light country stylings she's honed and exhibited in works like 2019's EP Singles. In addition to songs of her own, she plays covers and takes requests ahead of time that she'll learn (visit her Facebook page for more info on that), all of which she cheekily calls her "quarantunes."

She began her first stream, importantly, by making and sharing her cocktail of choice for the evening—a Manhattan. And just like some of us are borrowing needed pantry-items from neighbors, she used sweet vermouth loaned from a friend for her two-maraschino cherry-style drink.

Now, she's got her 5 o'clock happy hour streams planned for every Friday until at least May 29. Since we don't know how long this business is going to go on, it's good to know there's some cool music to look forward to—as well as an excuse to take out your cocktail shakers and whatever spirit that's been in your cabinet for way too long. 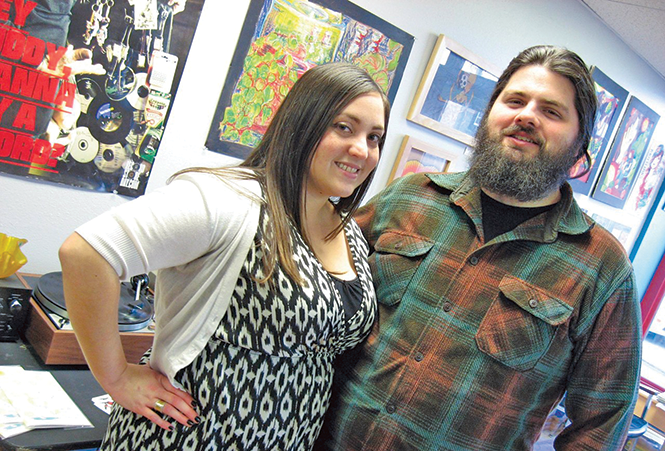 Drop Bags and Collabs from Diabolical Records
Locals have been coming together in lots of different ways throughout the beginnings of this crazy, unprecedented crisis. Local record store Diabolical Records is one valued and much-impacted business, and while they're offering gift cards, like many businesses are right now, they've come up with a clever way for locals to get a bunch of different treats delivered to their door.

They're called "Diabolical Drop Bags," and any amount between $10 and $100—plus a little background on what you're listening to lately—will get you a bag of records, cassettes or a mix of the two. Requests for some or all of the music to be local are honored, and the best part is that such a bundled order saves buyers up to 50%.

The idea is credited to local lifestyle shop Atelier (who stock a hefty amount of locally-made items), with whom Diabolical has also now run a collab drop bag of records and all things smell-goody and feel-goody. They also recently teamed up with inventive local ice cream makers Normal, who contributed three pints of ice cream per every $50 drop bag. These special collaborative sales are for a limited times with limited numbers of bags, so keep up with Diabolical Records on Instagram at @diabolicalslc or on facebook.com/diabolicalSLC to see who they share a goody bag with next.

Salt Lake Academy of Music
Live Stream Classes
Salt Lake Academy of Music (SLAM)—known as MusicGarage.org until a name change in 2019—has long been a resource for teaching music, particularly to youth. But no matter your age, SLAM has got resources for anyone wanting to use quarantine spare time to hop into music for the first time, or to increase the knowledge they already have. And the best part? Their live stream sessions are free, with local musicians, song-writers and producers are offering up their skill sets and guidance.

And it's no paltry selection, either. When they started at the end of March, classes included guitar, synthesizer, drum and music theory once a day, but have since expanded to include classes on rhythm, rock guitar, production for programs such as Logic Pro X, harmony, vocal lessons and songwriting, as well as a class where students can share what music they are listening to.

These classes run Monday to Friday, at 1:00 p.m. for youth and 4:00 p.m. for folks of all-ages; that means if your niece shreds harder than the other kids, you can probably send them over to the all-ages lessons. The vast schedule is growing still, so be sure to keep up with it either at facebook.com/SLAMSLC.ORG or at slamslc.org. If you latch onto one teacher, too, know that private lessons are available for a fee. Don't miss out on this generous and affordable opportunity to get into a good groove while times are tough.

R.I.P. the Zephyr Club
Not much is going on out there in the world of physical music, and the streets of SLC have been pretty deserted if you've dared go on a lonely walk down Main Street. Move over to West Temple, and maybe you were lucky enough to walk by the old abandoned skeleton of The Zephyr Club—because it would have been your last time.

City Weekly has been keeping a tally of the days that the Zephyr has stood empty and lifeless since it closed in 2003, but the days of commemorating that loss to the music community are over. As if a global pandemic, an earthquake, a shit storm of an election year and a looming recession weren't enough to make waking up suck each day, opening Instagram to see video of the Zephyr being bulldozed on Thursday, April 2, was enough to personally make me groan out loud. Can we catch a break here?

While I'm too young to have ever attended the venue for one of their legendary shows, many older Salt Lakers remember the good old days of this venue—its superb acoustics that brought big touring acts back again and again, its perfectly set-up center stage and upper seating tiers and the ever-present crowd of locals. It was, from all accounts of Salt Lakers in their late 30's and on up, a real rock club, one like SLC hasn't seen since.

It makes sense the city would finally choose to tear it down when everyone is cooped up at home and not out on the streets; one can imagine the crowds that would have gathered to send it off. Instead, in a truly awful way that feels like an actual person died, the Zephyr was sent off all alone. Here's hoping SLC soon sees a club with half the charisma of this now lost relic, a true local legend.