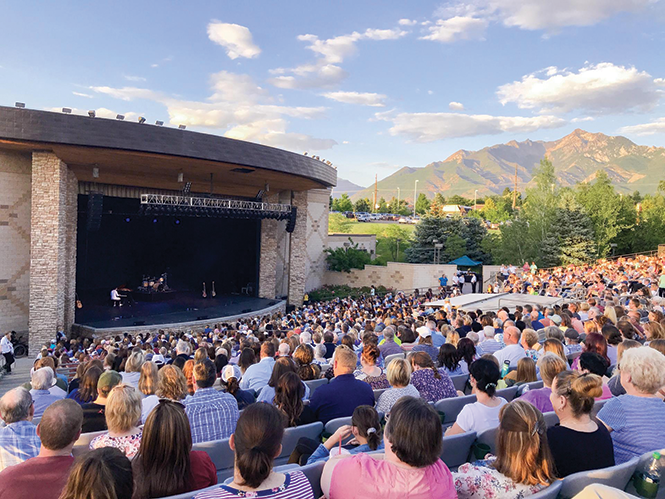 Sandy Amphitheater's Virtual Open Mic
It's hard to not mourn the loss of beloved summertime activities, but the folks at Sandy Amphitheater are preparing for a summer of social distancing. Their live Open Mic nights won't be happening, but with the help of the Sandy Arts Guild, they've ingeniously decided to move the event online for all to enjoy. While videos are currently posted on the Sandy Amphitheater and Sandy Arts Guild Facebook, Instagram and YouTube accounts, there are plans to launch a new website for it. "We thought this would be a fun way to bring that same event online and showcase local talent during the quarantine," Elyse George, Sandy Amphitheater Marketing and Development Manager, says. Nights will feature themes, too, giving some structure and expectation to each night; themes thus far have included "Classic Rock" and "The '90s." George adds, "Since we host an in-person Open Mic event every summer, we have a platform and venue to showcase this same talent with a live audience later in the year. Each musician we select to post is automatically invited to be part of our popular Open Mic event at the Amphitheater, which is typically competitive to participate in, as slots fill up very quickly." Anyone interested in participating in this virtual event should keep an eye out for theme announcements at facebook.com/Sandy.Amphitheater, RSVP to watch on their event page and make submissions at sandyampopenmic@gmail.com

Post-Corona Collaboration
What seems like yesterday was really over a month ago—that's when downtown bar Good Grammar presented its last monthly Critical Beatdown event (for the immediate future, that is). Hosted by local DJ and producer Finale Grande, the event has gathered and supported makers and lovers of experimental electronic music monthly for the past three years. On that March night, Octave Willis—a local artist new to the production scene, though classically-trained in music-making—performed at the showcase night for the first time. And though he says he's itching to get back to performing live, he's been keeping busy by making and releasing music. March 27 marked the release of his EP Agora, an immersive, energetic work that's trippy without totally tripping you out. Willis then donated initial proceeds from Bandcamp sales to the Tip Your Server program, benefitting SLC service workers who are out of employment (downtownalliance.com/tipyourserver). April found Willis teaming up with friend Jared Ray for some much-needed collaborative work, resulting in the singles "Blessed" and "Lanora."

The pair also started thinking about not just production collaboration, but collaboration outside and beyond the days of this pandemic. "We want to put together a collective in SLC for music producers—not just a label or studio space, but a place for collaboration, mentorship, helping new and unheard producers get comfortable performing," he explains. "We definitely expect more people to be producing at home during this time. When things clear, they may be unsure of what to do, and we want to help them out." This forward thinking, while still in its early stages, is essential. Here's hoping Willis and Ray are able to flesh it out just like they have their musical works.

Randy's Records Lends Jokes, Tips and Tunes
Not every business is just trying to stay afloat during these times—some want you to take care of the stuff you buy after it's yours, or to just keep you entertained. This is the case for Randy's Records, which is still open and operating—albeit with a capacity limit for customers visiting the store, and a cap on the time they can be inside—as well as shipping music, and posting even more records than usual on their Discogs page (randys.records on discogs.com). They're also keeping things fun on their Instagram page, with IGTV videos like the humorous "record shopping in the modern world" that somehow pulls off satirizing COVID shopping habits: many squirts of sanitizer to the hands, goggles and a hoodie pulled up over the face, etc. Owner Sam Stinson can also be seen on video with updates on records they have in stock, and presenting things like the "Wash Your Wax Challenge," which details how to use record-cleaning equipment for the vinyl you're hopefully still buying. This last development is new, and posts on it are forthcoming, plus perhaps the chance to win some "free sh-t" as they put it on their Instagram. Whatever you need—from a laugh to a new record to cleaning tips—keep an eye on their frequently-updated Instagram (@randysrecordshop) for all your vinyl-related needs.

Donate to S&S, Show-go Later
Every S&S-owned venue—Urban Lounge, Kilby Court, Metro Music Hall, The Greek Station, among them—was among the first to identify a (then) potentially far-off date for re-opening. But now that it looks like originally-planned re-opening dates in mid-May might not be possible after all, they're coming up with a new plan to float them in the meantime while they, like many business, wonder if they'll ever get government assistance. They're not exactly asking for donations to support them, but for local music-lovers to have faith, and remember that there will be a tomorrow after all this. A weirdly eerie and nostalgic picture of the inside of Kilby Court's bathroom area—with its signature Pizza Hut knock-off logo on the wall—has been shared a lot on social media, distilling in this writer at least, some trepidation about a potential future without venues like Kilby to foster local music. So, for anyone with cash to do so, invest it in our community by paying Urban Lounge, Kilby Court, or any other S&S venue now, and receiving for future use an extra amount's worth in show-ticket credits. Donors can give as little as $25 for $30 in ticket credit, jump to $50 for $60 in credit plus a venue-repping t-shirt, or even $250 for $325 credit, a t-shirt, VIP seating for two nights and an invite to the big party they're gonna throw when the world opens back up. Find more info on how to donate and redeem tickets on the homepage of sartainandsaunders.com. Don't forget that even if it doesn't feel like it now, shows will live again; in the meantime, the places that will house them could use some love and support.

K-UTE Carries On
The University of Utah is no exception to the nationwide early closure of campuses, and its college radio station K-UTE has faced the same hard choices as every other college radio station across the country. While not all have chosen to continue operating, K-UTE has adapted and continues to push out content on their website—and it's honestly one of the most refreshing spots to linger online right now. While every corner of the internet—from socials to online journals—seems to be saturated with overwhelming content about you-know-what, K-UTE is still offering ... fairly normal content. At press time, their front page features an album review, a personal essay/survey of the work of Earl Sweatshirt and a list of "Songs for the End of the World" that graciously doesn't name any details about the end of the world, just some songs for it. Podcasts by Hayden Limbach are posted every two-ish weeks from his home far, far from campus. One recent example, recorded back in February at Kilby Court, features local lovers of the venue swapping stories about the venue, with the chatter of people and instrument-tuning murmuring behind them—almost nostalgic sounds at this point. The creative adaptation to keeping their website up and running with blog posts and easy-listening podcasts is not only admirable, but maybe just the break that some of us need. Visit kuteradio.org to listen, read or just forget about the world.