Emily Merrell Unveils Masks
When one hears the word "masks" these days, it probably evokes the facial apparatuses we're all being encouraged to wear out in public. But Utah County musician Emily Merrell's new release, Masks, is about a more metaphorical understanding of the word, and about the "masks" we wear in our lives. The idea for the album was born five years ago, when Merrell was confronting some childhood trauma, a faith crisis and issues with gender roles. "It seemed like everything in my life was turning out to be different than I had thought," Merrell says. "I felt like 'masks' was an absolutely necessary topic for me to tackle with my next project." What started out as a musical meditation on the "masks we wear" became, she says, "a whole interactive performance-art series using email and web design as a medium, itself," which found its final release on May 8 under the title The Masks Experience. "I wanted to think of ways to invite the listener/viewer to participate creatively directly in the project," says Merrell, and that goal resulted in not just music, but a website full of colorful, "secret" Easter-egg-like pages, creative activities like coloring books or her "Mask of the Day" feature. Featuring the work of more than 40 visual and musical artists, this is much more than an album release, and anyone interested in viewing, hearing and participating should head over to emvocals.com/invite-only to see what it's all about.

HUM's New Archive Supports Artists
At the beginning of the pandemic, we wrote about how HUM—Hearing Utah Music, the archival local music program at the SLC Public Library—was working to make music more accessible to locals stuck at home. Now, the archive—which accepts local music submissions twice a year, before selecting and purchasing both physical and digital copies for their collection—has a new batch of selected local music to share with the public. Published to the HUM site at the beginning of May, this newest batch features a few more selections than normal. That's because the library generously made room in its budget to purchase more albums and EPs from local artists than they usually would, in an attempt to support more local artists left struggling during this crisis. Among the newcomers to the collection are the sweet solo wanderings of Peachy Fingernail, Indie-rock from a Utah County staple Whisperhawk, ripping metal riffs from Provo's Moray, traditional folk goodness from Ogden's Branson Anderson, one of the many collected recordings from ever-active SLC pillars The 8eat1ful5s, experimentations in electronic orchestration from Salt Lake Electric Ensemble, post-punk emo goodness from St. George's NVM and many more. Not only are all these artists valuable contributions to an archive of what Utah's musical scene sounds like throughout the state, but are valuable members of the community in need of support. While the library has shown its belief in the value of this work through its purchases for the archive, it wouldn't hurt to check out the links to their Bandcamp pages (on the HUM site) and buy some downloads of your own. Check out the full archive at hum.slcpl.org.

Ben Swisher of Sen Wisher, Ahead of His Time
While many of us are just now grappling with the strange distance of this time, and what it means to connect with the people in our lives while they're physically unavailable to us, local musician Ben Swisher—who usually performs under the name Sen Wisher—has already had a little experience in that arena. Two summers ago, while spending a lonely stretch of time studying music in Eugene, Ore., Swisher met now-friend and ethnomusicologist Elise Cavicchi online. That meeting launched a friendship that resulted in their collaborating on an album, despite their physical distance (she lived in Pennsylvania at the time). What resulted was The June of Two Place, a 20-minute stretch of a song-slash-album, made up of scraps of found sounds and ambient meanderings stitched together by the two musicians. The project fell by the wayside, however, as Swisher released more intensive projects. "I think when we finished this album," Swisher says, "we weren't sure if we should share it or not. In part because it was an experiment to see how making something with someone you don't know well, or in real life, could furnish connection, like sharing letters." But, two years on, as life locked down due to pandemic, The June came to mind, as even Swisher's nearby friends felt impossibly far. "Everything is a long-distance relationship to me right now," he says. "It's surreal. The relativity of both distance and time is just temporarily—hopefully!—different. So I guess this album is like a letter to my future self that you can close the gap a little with collaborative music and art." Stream or buy the hopeful exercise in long-distance creation at benswisher.bandcamp.com/album/the-june-of-two-place.

Raunch Staunchly Open
While some record stores have closed entirely to the public, Raunch Records in Sugar House is still open, albeit operating under extremely limited hours and self-regulations. With only four people allowed in at once, most sales are quickies by way of Raunch's colorful skateboard decks, magazines or anything in the case owner Brad Collins can grab for you. Collins is prepared to stick with limited hours—Monday - Wednesday, 2 p.m. to 6 p.m. and Friday - Saturday from 12 p.m. to 6 p.m.—despite loosened state restrictions on how businesses can operate during what Gary Herbert recently deemed a "moderate" risk status. But it's worth the effort to stop in, if not for Raunch's usual charmingly punk-as-hell wares, but for the face masks Collins is making available. They're adorned with the now-iconic insignia of "RAUNCH" with what I've heard is "fuck you" spelled out in ASL above the lettering. There's no better way to stroll around this apocalyptic setting than by wearing that, I'll say. Head into Raunch via the back door, where the parking is (even during the slower times of the pandemic, trying to park out on 21st is probably still a fruitless task), head in, squirt your hands with sanitizer provided by the door and take some time to buy some goods and support this longtime SLC staple. 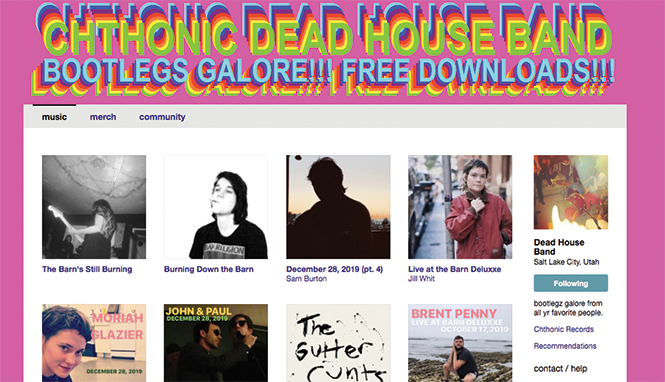 Local Binge: Chthonic Records
What got me considering the girth of local music that is Chthonic Records was strolling its rows and rows of music on Bandcamp during the last Bandcamp waived-fees day (something they've been dong lately in an attempt to support the small-time artists who use their sites for income, and now might exclusively rely on it for income in light of cancelled shows and tours), where I saw a very recent track ("Long Way Round") from an ex-Utahn by the name of Sam Burton. Decamping to Los Angeles a few years ago after heading popular SLC bands like The Circulars, Burton is now on the tipping point of making it bonafide-big. His two singles on Spotify are leagues away from past DIY work, and yet refined versions of it, too, showing maturity and smacking of the same kind of folkie indie stuff that's booming right now. My mind wandered to the near future of Burton's certain national acclaim, where his newfound fans won't know his old work is peppered all over Chthonic Records' Bandcamp—alongside tons of other SLC artists that played alongside Burton or around the same stomping grounds for years, many of whom are still creating and playing frequently. Names like Baby Pink / Katie Van Sleen, Tiffany Boulanger, Hoops, Jesus Christ and the Goddamns and the Circulars will be familiar to anyone active in the scene over the last decade. Not only are there albums by all these folks up on Chthonic, but special, warm bootleg recordings from shows at Kilby Court, DIY spot Barn Deluxxe and the Twilite Lounge live on Chthonic's sister site, chthonicdeadhouseband.bandcamp.com. Both spots are perfect snapshots of a corner of the SLC DIY scene as it has quietly and persistently existed, and continues to. Visit chthonicrecords.bandcamp.com or its bootleg companion and throw 'em some bones.