The Underground's Strong Streaming Game
While many local music venues have been hosting live streams, no one seems to be doing it with as much frequency as The Underground. Their Instagram page has been a constant source of live entertainment since April, with streaming content appearing multiple days a week. "I do see a lot of value in live streams. While I was out of work for the first month or so, I was finding as many to watch as I could. For me it was a way to maintain a sense of normalcy, which I hope to be able to provide for others when I host streams," says Derek Wetenkamp, the main booker at The Underground. In addition to providing space for bands to promote what would have been released and played out these past few months, the streams provide for music connections and platforms across state lines, with performances by artists from Pittsburgh to Portland and many cities in between. Most are bands that have rolled through The Underground before, but Wetenkamp says that some were just folks he asked cold if they were interested in playing the stream. "I think it's always important to maintain a network of friends both near and far away," he says. "It's nice to be able to pass along contacts to friends who need help with shows in other states. I think right now it's definitely important to stay social with any of your friends/colleagues." This is definitely true of their support for sister venue The Beehive. While The Underground is sitting comfortably rent free—having been permanent between venues since September—The Beehive is taking donations and hosting fests in order to keep their sweet spot on 666 State Street open. Follow both for updates on how to support and enjoy local music, on Instagram @theundergroundSLC and at Facebook.com/thebeehiveSLC.

Park88 Goes Live
Park88 is the newest project of Utah's musical power couple Rich Wyman and Lisa Needham. Both are prolific local musicians who have seemingly done it all during careers in music, occasionally apart but mostly together. After Wyman's debut album in the early '90s was released, a chance discovery by the one and only Eddie Van Halen led to a follow-up, featuring a lot of collaboration from Van Halen. Besides this prestigious early start, Wyman has gone on to craft many other albums over the years, and if that isn't enough to grant faith in his abilities, his album of covers, Songs I Wish I Wrote, should do the trick. His craftiness with both original compositions and translating others' songs to his own style is not only impressive, but not to be missed, since he and Needham will be putting those skills on display during Park 88's Live All-Request Concert. Park 88's 2018 album, The Fearlessness, is piano-man meets rock 'n' roll all the way, and if their spirited and energetic live performances are anything to go by, their live-stream series will be a can't-miss occasion. Shoot Park88 a request before the stream at facebook.com/PARK88OFFICIAL, and tune in on Sunday, June 7 at noon for a few hours of carefree tunes. 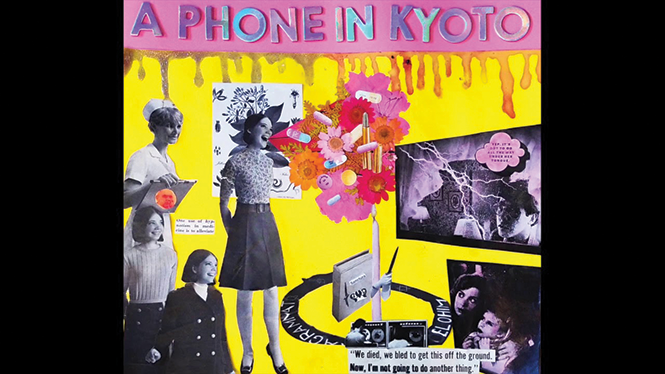 Idi et Amin Put the "EP" in Epidemic
A review of Idi et Amin calls for a headline like the one above, to match their edge. The shoegaze maestros—noted in City Weekly's 2020 Music Issue as one of the best new bands in SLC—are living up to the hype inspired by the release of last year's dreamy, too-good-to-be-modern album Texas Rose. They're continuing in the same vein on their new release, the quickly crafted A Phone in Kyoto. The short EP is made up of two long tracks, starting with "Picture of Her (The Boy Mason's Third Charm)," which jams and jams and jams before spiraling out at the very end in a brief, ping-ponging way. It's followed by "Japanese Sugar," a delightful track with guitars twanging in a way that's like a more down-home My Bloody Valentine. The duo of Rocky Maldonado and Catalina Gallegos has been teasing new material for a while, and this EP provides an appetizer for the release of their second album, Candy Suck, one gem-of-a-title that will be out in the next few months. Keep an eye out on their Instagram @idi_et_amin for info on streaming coming up on Bandcamp and Spotify; listen to the EP on Rocky Maldonado's YouTube channel in the meantime.

Provo's 3HIVE Opens for Business
One local record shop is opening back up for business—though it's down in Provo, where COVID-19 cases are (thus far) lower. The shop in question is 3hive Record Lounge, Provo's hip spot to get new and used records, along with all the equipment any vinyl-head needs to enjoy music right. They've been peddling their records, equipment and merch lately in much the same way that others in their position have been forced to—through a combo of pick-up, delivery, mail orders and private appointment options. Now, with lifted state restrictions on operation, they're allowing old friends (what they lovingly call their customers in recent social media posts) to trickle into their downtown Provo shop a little more freely, with a return to normal hours of noon to 8 p.m., albeit with the policy that visitors stay under groups of 10 and use sanitizer (either their own or the store's) before and after leaving. Mask-wearing is at customers' own discretion (but c'mon, just wear one). Even before re-opening, though, they kept up their reporting of new and cool music happenings both on their blog (3hive.com) and on their Instagram posts, remaining a touchstone for anyone who needs an ear to the ground regarding all things current. And though they're back open for mostly-regular business again, it's still worth heading to shop.3hive.com to check out their comprehensive online listings of vinyl, plus their super cool merch if you feel like being extra-supportive.

Local Binge: Rest 30 records
If it's SLC history you crave, look no further than Rest 30 Records, home to old recordings from Red Bennies, Jazz Jaguars and some sadly now-defunct SLC bands from as long ago as the early aughts. The archive is huge, and weird and interesting, and might just be the motherlode of local music from the past 20 years. Stewarded by Dave Payne, it's the kind of website that's now quite dated despite its functionality, and calls to mind a time not so long ago when the internet was a freer, more exciting place for creating spaces all one's own. Pages are dedicated to old homemade music videos featuring Red Bennies songs filmed in venues that don't exist anymore, as well as a documentary-style video detailing—in a halting, unrushed and music-dispersed way—a trip by Payne and his 20-plus year collaborator/friend Josh Stippich, who makes up part of his new band The 8eat1ful5. The video features cameos from other SLC bands like Hoofless and Durian Durian, as well as Payne and Stippich's pet project, the portable arcade game bus dubbed the Gallery of Fine Hyper Art. An "About" page describes the origins of Rest 30 Records (less a record label, and more a name for Payne's distribution of CDs from his old bands), while another page features podcasts from Twilite Lounge. But the best part is the huge collection of free downloads featuring dozens of bands from SLC's past: Joshua Payne (of JPO, a now successful project out in LA), Heaters, Purr Bats and many more. If the world of right now is just too much, spend some time browsing the red-text-on-black blast-from-the-past that is rest30.com, or find more downloads at rest30records.bandcamp.com.