A Comeback for Moab Music Festival
The Moab Music Festival is already one of the most distinct and unique music festivals anywhere in the world, with their focus on marrying the music of woodwinds, strings and brass with nature—or, as they put in, "music in concert with the landscape." Their outdoor concerts feature many forms of classical music, along with jazz and other adjacent genres, and take place throughout the beautiful natural wonders that surround Moab. And this year, it's all outdoors. In an attempt to keep the festival as safe for festival-goers as possible, and viable at all, Moab Music Festival performances will all be out of doors with smaller audience-sizes—on their Musical Raft Trips down Westwater Canyon, at their Grotto Concerts in naturally carved out red rock grottos, on musical hikes to remote, acoustic-perfect spots, and at the Red Cliffs Lodge and at The Ranch. The festival is also one of the first in the country to continue as scheduled with its changes for safety, and will omit intermissions, pre-concert talks and post-concert receptions. This approach might result in this year's fest having a larger population of pure diehards—those there for the specialness of the music and the landscape, rather than the novelty and rustic glamor of such peripheral events. The festival kicks off Aug. 31 and runs through Sept. 14, so there's plenty of time to pick a block of the fest that suits you best. Visit moabmusicfest.org for ticket and accommodations info, or call the box office at (435) 259-7003. 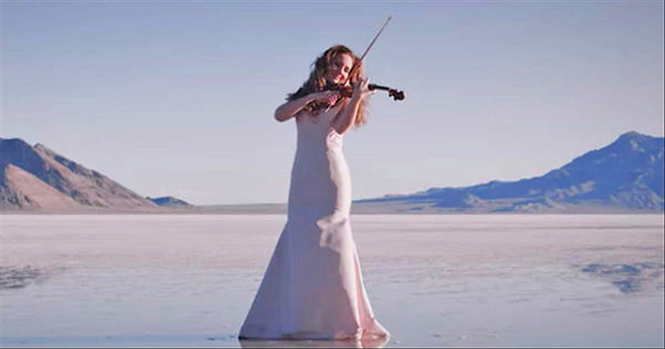 Murray City Parks, Arts and Shows
Murray City Cultural Arts, for the past few weeks, has opened up their parks and communal spaces for social gatherings once more, although of course at a safe distance. Alongside kid friendly events at Murray Park for parents who need to get the kids out—like this Thursday's Children's Matinee Magic Show—there are also all-ages events on the horizon. At the Murray Park Amphitheater on July 31, The Strawberry Fields Band will deliver covers of Beatles hits, and no doubt their namesake song. That show starts at 8 p.m., with a $10 admission fee payable online or at the door. On Aug. 7, SLC's own famed violinist Jenny Oaks Baker takes the stage, though it's much smaller than she and her band of children are used to playing on, as Oaks Baker has taken her Grammy-nominated skills to Carnegie Hall, Lincoln Center, the Library of Congress and our own Utah Symphony, among others. The opportunity to see such an accomplished local artist for just $10 is not to be missed, and those interested can head to this show at 7:30 p.m. All Murray City Cultural Arts events follow Salt Lake County Health Department and Governor's Events and Cultural Entertainment guidelines, with a reduced number of tickets, free masks at the door and hand sanitizer, as well as assigned seating. Ticket info and more events can be found at facebook.com/MurrayCityCulturalEvents

SLUG Picnic Concerts
SLUG Mag has found a partner in Sparrow Electric—a local solar company—for their new attempt to join other innovative social-distance shows. After kicking off in late July with performances by Mel Soul & The Messenger, Rocky Lavoie and Jazzy Olive, they'll go at it again on Aug. 22. The concert series features social distancing, of course, and offers many enticing options accompanying the music of the night, including a food truck and local artisan booths to browse and buy from. Picnic spots for up to six people are available for purchase, which come with a picnic basket full of goods from local sponsors. The first show is in the parking lot of the new SLUG offices—which, sadly, indicates that the days of SLUGs Pierpont residence are over. But changes are everywhere, and at least they're using their new digs to provide fresh air and tunes to music-lovers who've sorely missed shows this summer. General admission tickets are available for those who want to hang out outside with a group while enjoying the music; there's even an option for a Dog Ticket, which allows attendees to bring along a dog as long as they're on a leash and up-to-date on shots. The ways our community is innovating ways to enjoy shows together safely outside during these hot, languid summer months of the pandemic seem to be growing daily, and you shouldn't miss out on this new opportunity. Catch performances by Cherry Thomas, Elowyn and Fur Foxen on Aug. 22, and don't forget the mask! Get tickets for $15 at slugmag.bigcartel.com, and get there at 5:30 to catch sets between 6 p.m. and 9 p.m.

Diabolical Re-Opens
Unlike many other businesses doing the whole fake-smile thing around having to function during the pandemic, Diabolical Records has been disguising nothing about their feelings. At the beginning of the pandemic, we reached out to them to get their thoughts on how they were deciding to function—which was via online order, pick-up and drop-off only, and at points, by scheduled appointments for folks to actually come into the store. They expressed disappointment and incredulity at that time about the way businesses were being forced to make these decisions without much sensible guidance from the government. Now, even upon their recent re-opening, that attitude is still in place—which is reassuring for those of us who are also still shaking our heads at life seeming to start back up again even as cases rise. On their Instagram page, Diabolical wrote recently, "We would love this to be a 'we beat it, huzzah' type of re-opening but alas, it is not. Due to the overwhelmingly idiotic response to this pandemic we are simply forced to re-open." While it sucks that they've been forced to re-open to the public despite not wanting to, they've got a number of rules in place for re-opening, on top of still offering curbside, drop-off, drop bag and online order options. The shop will be open Monday-Friday from noon to 4 p.m., with no more than four people allowed in the shop at a time. Masks are required, cash is banned and people can sanitize their hands and put on latex gloves at the door. For more info on their re-opening, visit them on Instagram @diabolicalslc and visit their website for online orders at diabolical-records.square.site.

Logan Takes up the Mobile Model
A new popular concert format that's popped up in SLC by way of S&S's Concert Cruises has made its way to Logan. WhySound venue is operating a very similar operation, but we're not calling copycat: it's simply a clever idea for how to start doing shows again, and it makes sense that any venue jonesing to do shows would take it up. WhySound is calling theirs a Rolling Show, kicking off July 29 for the first weekend, and following it up on Saturday, Aug. 1. Each night will feature a TBA lineup of six bands, and the audience—who can roll along on bikes, skateboards, skates, scooters or anything else that allows smooth movement upon the ground—will visit them at three different locations, all starting from the WhySound alley. Tickets are only $10, and limited spots can be reserved by paying via Venmo or PayPal with the handle @whysound and one's name and preferred attendance date. Masks are required, which should be a "duh" thing for everyone at this point, and those who feel ill are asked to stay home, which is another "duh." This will mark the first IRL concert hosted and organized by WhySound since the world shut down in March, but they've been keeping busy with their local virtual streaming series WhySound Records Live, which has so far featured six Northern Utah favorites; recorded videos are still up on facebook.com/whysoundvenue, where you can also find out more about the Rolling Show and look for future dates.