Once Upon a DIVA Returns!, Two Old Guys, Tunes and Oysters, Fry Pan Band Ploughs The Garten, and more. 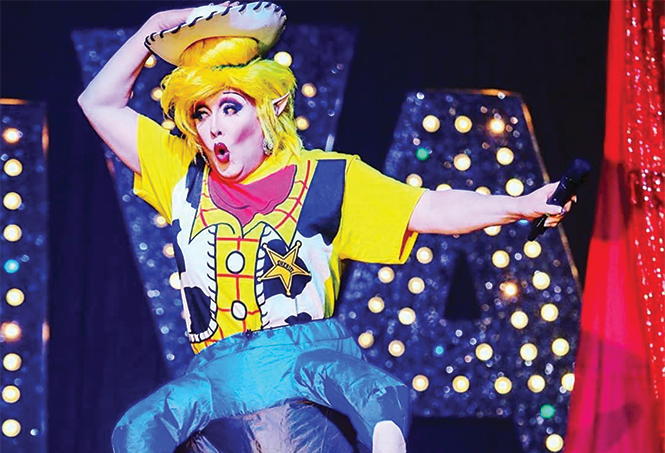 Once Upon a DIVA Returns!
For anyone who has missed SLC's finest drag artists, Metro Music Hall has brought it back, starting in July and continuing into August with the return of one of Viva La Diva's most prized showcases—the one and only Once Upon a DIVA. The show involves parodies of beloved fairytale characters and stories, from the most hated villains to the sweetest of protagonists. Whether you're a Disney maniac or not, the drama of the drag world certainly offers up a plot twist to classic tales with help from their host CoZmo-Bell. After more than a month of re-starting shows, and also considering that Metro Music Hall is one of the more cavernous venues in the city (a quality that maybe used to be annoying in terms of bands filling the void between the stage and ceiling, but now is certainly a boon under pandemic circumstances), the space seems like one of the safer bets for gathering indoors—and Lord, there's probably air conditioning to some extent. All seats are spaced six to eight feet apart, masks are required, and more social distancing rules and ticket info can be found at thevivaladivashow.com; head over fast, before the limited tickets sell out. If it's any extra temptation, pairs and groups can get discounted tickets, knocking single ticket prices from $35 for one person to $30 a person in a group for four, $27 a person with a group of six, $25 for a group of eight and 30% off any group that's 10+ (but I really hope that, if you've got 10 friends you're partying with, y'all have literally been stuck with only each other in a cabin for the past four months). Follow @thevivaladiva show on Instagram for updates on other upcoming DIVA-tastic nights on the horizon.

Two Old Guys, Tunes and Oysters
There's nothing quite like a fancy dinner and a show to go along with it. Luckily, open-air musical sets are one thing that feel a little less weird to participate in during COVID days (and their hot, hot evenings). If it's seafood you crave and an easy-going night of music, too, then head over to the patio at Kimi's Chop and Oyster House (2155 Highland Drive), where diners can enjoy the musical stylings of Two Old Guys. Yes, that's capital Two Old Guys, not just any two old guys: Tally Evans and Mike "DellMan" Feldman, of Feldman's Deli. The pair—who share a "love for the egocentric nature of an arbitrary universe," according to their Facebook page—have been working crowds on the patio circuit for the past two years, unspooling their enthusiasm for all things bluesy and folksy, from the outrageous to the sappiest of ballads. Such a repertoire is perfect for the mixed audience of diners they probably encountered all the time before the pandemic made shows pause. Now, they can get back at it on Thursday, Aug. 13 at Kimi's in the ever-bustling Sugar House. Don't miss their set of covers and original work—it starts at 6:30, so know you've got time to get an appetizer and maybe a glass of something boozy in before the tunes begin.

Fry Pan Band Ploughs The Garten
If you've never caught a lively performance by the Fry Pan Band, it's one of the most organically lively kinds of sets you can experience. The six-piece local group uses a jazzy background aided by trumpet, saxophone and trombone finished off with guitar, bass and drums to craft their swinging sound, which rattles along like a wagon about to lose a wheel and spill cookery everywhere. They do invoke the sizzling heat and down-home feeling of frying up something zesty and flavorful, thus earning their name. They're the perfect pairing for all the flavors going on at Mountain West Cider's watering hole The Garten (417 N. 400 West), and they will have plenty of new original material to put on display for all the drinkers. Don't sleep on the chance to spend time catching up with pals out in the open-air patio, styled after an Old-World German beer garden, complete with not just ciders but beers from Red Rock Brewing. Fry Pan will have some catching up to do, too, after a spring and summer of canceled shows left them just as thirsty for good clean fun as everyone else. Music starts at 7 p.m. and runs till 10 p.m. (the sweet spot hours just after the sun begins to calm down), so head over, have a cider or two and maybe even some food truck fare—and leave the frying up to Fry Pan. 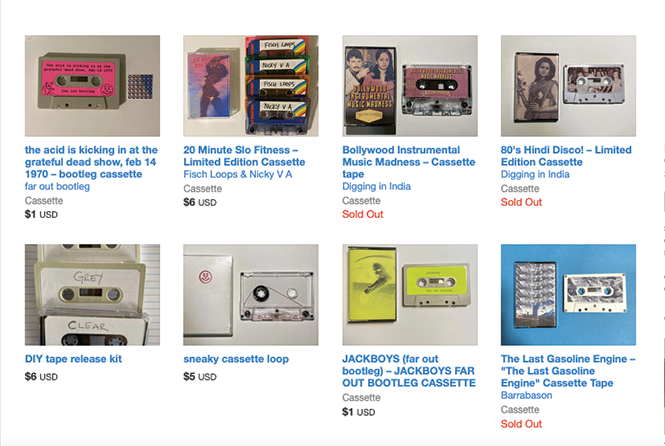 Local Binge: Far Out Cassette Club
DIY tape production has been a "thing" for a few years now, popularized by all-tape labels including the now-disgraced likes of Burger Records, but also by many other small indie labels with affinities for all things vintage and fuzzily permanent. While the cassette is a strangely delicate permanent music format compared to records or even easily-scratched CDs (they don't degrade like tape film does), it can still be expensive to put music out on tapes. This fact was the impetus for the birth of SLC-based Far Out Cassette Club. Active since spring of 2019, the label specializes in making tape releases even more accessible and affordable for local artists, and have put out small releases by locals like the analogue-minded Fisch Loops, pop princess Cera Gibson and side projects from Alfonso Bellaso (Kanye West Jordan here). The label often uses found tapes, or re-records over vintage ones, or collects strange finds like mixtapes found at estate sales, the latter of which are of such shit quality that they warn on one post not to play them in your favorite deck (because of tangling old tape, one assumes). They also release music from non-locals, but that only lends to the sense of treasure-hunted goodness that exists on both their Intagram @faroutcassetteclub and Bandcamp (faroutcassetteclub.bandcamp.com/merch), where currently-available tapes can be browsed and ordered. A delightful gift for any enthusiast of physical music and vintage finds, this is one niche (but special) aspect of the SLC production scene.

JRC Live Stream Events
Although it's summer, and many might be lusting after outdoor activities, livestream events are still very much available to those who want to stay in the comfort and safety of their own homes—especially if you've got AC during these hot August days. JRC Events has pivoted online in the past few months, hosting online conversations between local and non-local drag artists called Cyber Werk, a digital talk show. Now, on top of drag-related content, they're offering up all sorts of music-related goods, too, in the style of The Depot's Concerts from the Crib. The whole month of August is filled with a roster of artists, kicked off by performances from Cherry Thomas, Marlo Suzanne, Courtney Lane, Delta Rae Dixon and Mya Dvrsty among many others. As of press time, upcoming shows include drag performances from Lilia Maughn (Aug. 15), solo acoustic guitar stylings from Nick Johnson (Aug. 16), dance from Dance With Sobriety non-profit founder Austin Gillepsie (Aug. 19), chill pop vibes from Suit Up, Soldier (Aug. 22), soulful goods from Keyvin VanDyke (Aug. 24) and a dose of indie rocking from Del Perro (Aug. 31). These are just a few of the many acts slated for the rest of August, so head over to @jrcevents on Instagram for day-by-day listings, and hop on their Instagram livestream at 8 p.m. for all this and more.