Reviews: Carnivale Electricos, I Am Gemini 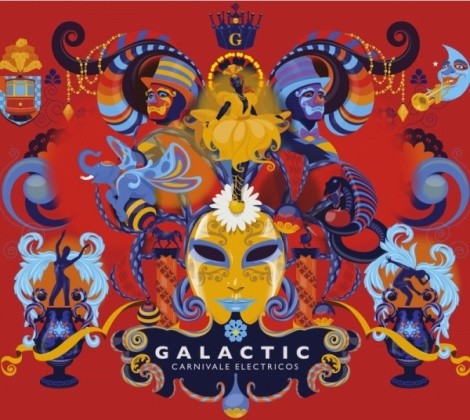 It’s strange that, in more than 15 years, New Orleans jazz-funk troupe Galactic is just now getting around to making a Mardi Gras, or Carnival, album. Then again, every one of their records bottles the concept of a party fairly well. It’s not just that they consistently crank out jubilant jams; since 1996, Galactic has observed Lundi Gras—the night before Fat Tuesday, and played until sunrise. The group also has come to include whole platoons of guest musicians on their albums, like with 2007’s MC feast From the Corner to the Block and 2010’s N’awlins tribute Ya-Ka-May. Carnivale Electricos continues this rich tradition of inclusion, with 16 visitors (that’s counting Brazilian variety ensemble Casa Samba as only one) showing up to this musical potluck with signature dishes. Al “Carnival Time” Johnson sings his 1960 Mardi Gras anthem, rapper Mystikal adds his aggressive spitting to the smoothly sublime “Move Fast,” and Cyril and Ivan Neville (Ya-Ka-May and frequent live pop-ins) lend their signature vox to the soul rave-up “Out in the Street.” Cajun maestro Steve Riley is present, as is Mike Dillon (as in Go-Go Jungle), and up-and-coming singer-songwriter Maggie Koerner. Fittingly, Carnivale Electricos sounds exactly how it was meant to: an all-night party where everyone’s invited. ANTI-, Feb. 21 (Randy Harward)


Cursive, I Am Gemini

Omaha, Neb.-based indie band Cursive’s newest album, I Am Gemini, is a deeply meditative blend of narrative, rock & roll and psychedelia, infused with undertones of ancient myths and moral struggles. The album is frontman Tim Kasher’s first attempt at a completely linear narrative—the story of Cassius and Pollock, twin brothers separated at birth to be reunited to dramatic ends, unfolds from the opening notes through the end of track 13. The band’s sound changes with the events in the story, at times wrathfully metallic and, elsewhere, gentle, emulating Explosions in the Sky with a series of dreamlike instrumentals. There is a clearly mythological aspect to the whole thing, with various references to biblical places and Greek gods, paralleled by the constant strife between good and evil that is ever-present. “This House Alive” incorporates all the eerie creaking and calmness that would be expected from such a title, while “The Sun & Moon” and “Twin Dragon/Hello Skeleton” communicate the album’s essential theme of duality.


Though it could be considered heavy-handed at times—do we really want to hear that many songs about epic final battles?—it is an admirably cohesive accomplishment from a band that has been around the block a few times and understands what it means to see a vision through to its utmost expression. Saddle Creek, Feb. 21 (Kelsey Leach)