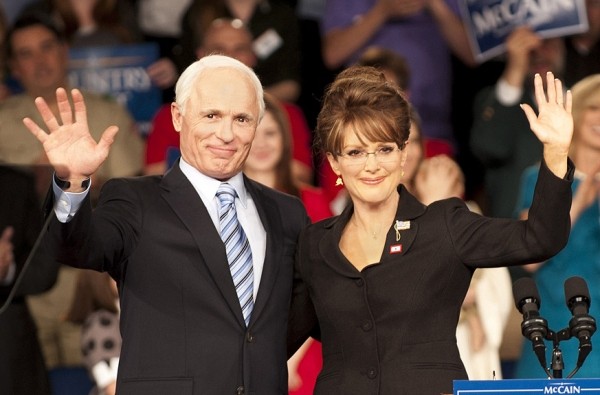 Movie: If nothing else, Game Change should give you chills over the bullet ’Merica dodged in rejecting the Sarah Palin/John McCain Republican presidential bid three years ago. Palin was listed first there, because she essentially took over the campaign shortly after her splashy debut at the 2008 GOP convention, and then just-as-essentially drove it into the ground as McCain stood by asking, “Didn’t anybody check this nutjob out?”


Woody Harrelson plays the man who was in charge of the checking, Steve Schmidt, an otherwise brilliant campaign consultant who had a “conservative woman” Googled to boost McCain’s (played by Ed Harris) appeal with female voters. He found a seemingly perfect vice-presidential fit in unknown Alaska governor Palin (Julianne Moore, the frighteningly dead-on flipside to Tina Fey’s comic take). What unfolds is a passive-aggressive internal power struggle so juicy it had to become a book and film. And, really, comparing Moore’s Palin to Fey’s is like putting The Dark Knight up against the campy ’60s Batman—no contest.


Ultimately, Schmidt/Harrelson accepts the blame for greenlighting a running mate whose charisma and hunger for the spotlight far … far, far, far … outstrip her basic knowledge of global and domestic policy (but not geography: Game Change does get her infamously misquoted “You can see Russia from Alaska” line right—doesn’t make it any less of an idiotic foreign-relations point, though). Still, he and everyone else involved—especially McCain, who, pre-Palin, was that rare media-darling Republican—come off better than the “Mama Grizzly,” who’s painted here as an entitled hillbilly narcissist prone to catatonic zone-outs and convenient half-truths and lies. In other words, everything she’s proven herself to be since 2008. But, if you want Palin’s side of the story, there’s …

The Undefeated
Sunday, March 11 (Reelz)
Movie: This 2011 Sarah Palin documentary/propaganda (docuganda?) film played to about as many paying customers in theaters as there are people aware of Reelz in their cable lineup (DirecTV 238, Dish 299 and Comcast 500 for the rest of you), and movie critics savaged it—but so what? They also hated 2011’s Drive Angry, which I maintain is the greatest Nicholas-Cage-drives-angry cinematic tour de force of all time; everybody makes mistakes. Well, except for the sainted Palin of The Undefeated, an 80-percent-approval “warrior” governor who would have lifted Alaska to heaven on her own shoulder pads if she hadn’t, you know, quit. The film does highlight some undeniable pre-’08 achievements, however, like Palin’s ballsy stands against Big Oil and her own Republican party, info that would maybe have been more helpful to the McCain campaign than pricey Nieman Marcus power skirts. Neither Game Change nor The Undefeated is going to change your mind about “Caribou Barbie,” but, together, the full picture might be there. (And no, don’t add me to your Tea Party mailing list.)

Finding Bigfoot
Sunday, March 11 (Animal Planet)
Season Finale: The Bigfoot Field Researchers Organization, which has a TV show and you don’t, travels to Utah in the Season 2(!) finale of Finding Bigfoot to investigate an alleged sighting. Any guesses as to what they don’t find? See you in Season 3, suckers!