Improve your well-being by building activity into your day. 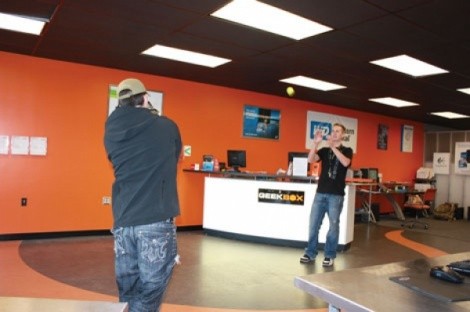 Ever since television became readily available to the masses back in the 1950s, modern human life has become a conditioning process of sitting. From TV to computers, not to mention labor-saving devices—including vehicles and public transport—it’s become less and less necessary to use our muscles for functional work.

The corresponding result has been a rise in obesity, heart disease, mental stress, depression and other conditions that many scientists say occur because humans are ignoring the physiology of our species: We were meant to move. So, some people join gyms, go running or play in league team games.

Others don’t have time, or never use their gym memberships and wonder how they’re ever going to lose those darned love handles.

Take a tip from Justin Watt and James Gingrass of Geekbox Computers in South Jordan.

“This is a pretty stressful job. Everyone’s in a panic when something goes wrong with their computer, and everyone wants their computer fixed right away. Rather than let that stress get to us, James and I will take a few minutes for a quick game of catch with a tennis ball,” says Watt, the shop owner. “It gets our heart rate up and exercises our shoulder and arm muscles, which is a good warm-up for our work as well.”

Watt’s solution—a brief break to play an active game or get some activity—can do wonders in a stress-filled day. You’ve probably heard about many of the chemical changes that happen in the body after a period of activity. The wash of endorphins flooding a runner’s system—the “runner’s high”—is just one example. A fast walk—a well-known solution to a state of annoyance—calms the flow of adrenalin that sometimes makes someone want to punch his or her boss in the nose.

In fact, creating your own routine of brief bursts of activity during your day can make a big difference in the way you feel and, as the holiday season approaches, the amount you weigh. Don’t dismiss the idea; it can help your heart just as much as watching what you eat can.

Many years ago, I was part of a car pool. We decided to group-work our bodies twice a day by parking half a mile from work. At first, it was inconvenient; we each had to get up earlier and leave earlier, plus we got home about 15 to 20 minutes later in the afternoon. Two people dropped out of the car pool. Others wanted in. It took about a month for everyone to adjust, but then we became enthusiastic about the idea, lengthening the walk to a mile one day a week. By the end of three months, we had each lost five pounds or more.

There’s a good reason to recruit a workmate or neighbor for these short periods of activity every day. By yourself, it’s easy to skip being active: You’ve got too much work and you need to catch up, you’re feeling tired, you don’t want to get your heart rate up today, you don’t want to break a sweat in the clothing you’re wearing, others may be looking—you can come up with a thousand excuses and reasons to spend your days without ever having to take a deep breath. But if you use the buddy system—someone with whom you have a schedule to briskly walk around the block or the neighborhood a few times a day, or even an informal arrangement to walk up three flights of stairs or toss a ball—then you’ll be more likely to do those intended bursts of activity each day.

It should be something that uses your whole body. A five-minute game of catch takes no more time than a coffee break, but instead of sitting around slurping something, you’ll be running, reaching and using your core. At this time of year, when candy, cake and goodies of all sorts will be ending up around your waistline, putting a little activity into your day is a perfect way to eliminate some holiday stress and improve your physical conditioning at the same time.

Get Out Get Out