When Robbie Maupin first dated his wife-to-be, Emily, he took her to his new shop, Garage 94, on 9400 South, just west of State Street, in Sandy. Prior to owning Garage 94, he had been pushed from one location to another, as landlords sold out to developers. Just a few months before he met Emily, he'd agreed to buy the 40-year-old garage from the man who had first employed him as a mechanic.

Maupin couldn't stop grinning that summer day in 2002, as he showed her around the dirty cinder-block-walled shop with its oil-stained floor and dense clutter of engine parts. "He was so proud of it," Emily says. "He was like a kid showing off a new bike."

Shrouded by trees, just off a two-lane blacktop descending from State Street, his garage was "a little slice of heaven," Maupin says.

Besides cars, he'll work on anything with a motor, from a Harley to the eight snowmobiles a friend has parked on his lot for repair. Fixing a car is like an intricate puzzle that keeps Maupin awake at night. Even as cars have become computers on wheels, he says, the fundamentals don't change. "An engine is an engine. They all have different ways that make that son of a bitch work."

But what has changed is the backdrop to what he calls his "ugly shop." Where 10 years ago, there was a large field strewn with garbage and six dump trucks in pieces, now there are the gleaming lines of the taxpayer subsidized $110 million Rio Tinto Stadium, the southside parking lot of which abuts his property.

Standing outside Garage 94, South Jordan real-estate agent Joe Scovel looks over at the Rio Tinto soccer stadium, its great white, overarching covers supported by right-angled poles like white bones under a bright blue winter sky. "That stadium started it all," he says.

When local media stories announced in October 2005 that Real Salt Lake (RSL) was moving to Sandy after a tumultuous political battle over public funding, the prices of property surrounding the 19.7 acre lot where the stadium was to be built went through the roof. Sandy City Mayor Tom Dolan was likely not referring to Maupin's garage when he told The Salt Lake Tribune in October 2005 that the stadium could be a major economic driver and a "real catalyst" for all the properties around 9000 South. Nevertheless, Maupin's property, given its location on what would be the corner of where Rio Tinto Way begins its northern descent to the stadium, overnight became the focus of intense interest to multiple parties. Since then, Maupin says, "it's just been a constant fight" to maintain ownership of the garage and the ground it stands on.

Other owners of automotive and industrial businesses that surround the stadium echo Maupin's belief that Sandy City doesn't want them there—that they are, as one commercial entity owner puts it, "the wrong kind of business." While RSL and Sandy City's development plans for the area surrounding the stadium fell victim to the 2008 financial crash, Real's new owner, property magnate Dell Loy Hansen, according to the team's website, is looking at development around the stadium. 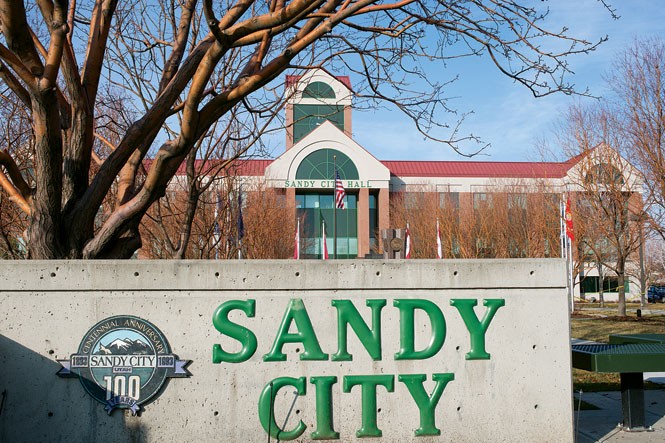 But the city isn't only interested in shopping malls and upscale development. Sometimes the city just wants a sidewalk—or in this case, a walking path. What Scovel uncovered through record requests and knocking on doors was what land surveyor John Stahl calls "the weird actions of Sandy City," focused on building a public trail across the corner of Maupin's garage property from the stadium to parking at the neighboring Jordan Commons and South Towne Expo Center, with the hope of relieving some of the game-day and event congestion.

Maupin has shaken off in court an attempt by the prior owners who claimed they had not sold him the garage and tried to evict him. He survived Sandy City's code-enforcement squads' "strikes" on his property, and the stadium's construction that barred traffic from reaching his business as a new road was put in. He also lost valuable income from having his emissions and safety inspection licenses taken away following a Utah Highway Patrol undercover sting. Now, he faces a challenge from his hometown after Sandy City acquired a piece of Maupin's property by buying it, seemingly illegally, from the prior owner.

City Weekly requested interviews with Mayor Dolan, city attorney Walter Miller and city surveyor Nolan Hathcock—the latter two being instrumental in the acquisition of 0.04 acres of Maupin's 0.29 acre lot, according to court documents, letters and e-mails City Weekly accessed through a record request. Martin cites ongoing litigation as barring any "public dialogue" regarding the history behind the dispute, but notes the walking path Sandy wants is for public safety. "We have people trying to access Rio Tinto Stadium, and this trail becomes an important byway for them."

Not, however, for Rio Tinto. Craig Martin, general manager of stadium operations, says any such path would be "inconsequential to what happens here in terms of egress and ingress."

It is questions about the legality of the first deed and Sandy's interpretation of the second that lie at the heart of a lawsuit Maupin has filed against the city.

In late 2014, Maupin sued Sandy City and Tamie Ogden, the former owner of his garage (her husband Mike died in 2009), claiming that Sandy City either alone or with other parties, "had developed a 'plan' to acquire a portion of [Maupin's] property, regardless of whether [he] would consent to the sale," according to a filing in 3rd District Court.

In this strange, convoluted tale of private property rights and municipal development, Maupin's fight boils down to just 1,700 square feet that overnight were stripped from his ownership. It might be asked how Sandy City convinced Ogden to sell her land that Maupin is adamant Ogden no longer owned. But the biggest question is why the city simply didn't negotiate with him to buy the land in the first place.

"I think Sandy [City] was looking for a way to accomplish a goal, and this was their attempted solution," says Stahl, who is Maupin's expert witness. "And it's created a nightmare for the Garage 94 people. They're the innocent party sitting here trying to run a business. Now, all of a sudden, they've got land taken away; they haven't done anything but buy a piece of property. They haven't deceived anybody, they haven't done anything shady. They're on the up and up that I could see, and they're getting trampled on by Sandy City."