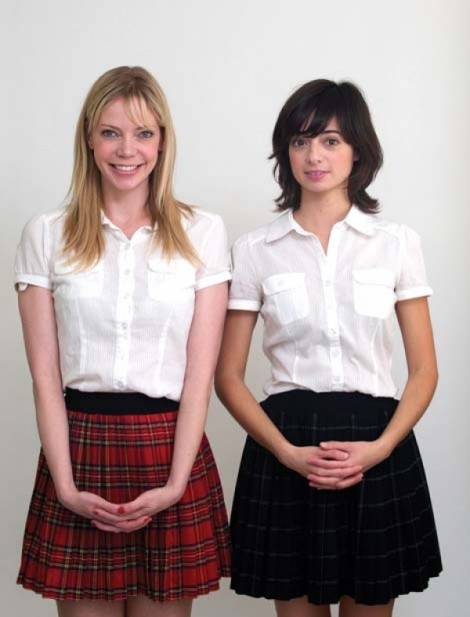 With a canon that includes hilarious and catchy songs like “I Would Never (Have Sex with You)”, “Pregnant Women are Smug” and “Sex with Ducks,” Garfunkel & Oates belie their appearance as two sweet, young singer/songwriters.

The duo’s real names are Riki Lindhome (left) and Kate Micucci (right), actresses you may have seen guest starring separately on TV shows including Rules of Engagement, The Big Bang Theory and Scrubs. Their joint project started when Lindhome invited Micucci to help her write songs for an independent film she had written and directed called Imaginary Larry. “We wrote two and a half songs in two hours,” Micucci recalls. “We were like, ‘Wow, this is so much fun.’ We knew that night that there was something special.”

On a lark, they put a few of the songs on YouTube, and then left Los Angeles to do movies—Lindhome in Africa, Micucci in New York. They returned to find that they had thousands of hits on the posts. They settled on their act’s name after Lindhome attended a Hall & Oates concert and noticed that the JumboTron showed a lot of the former and not so much of the latter. “I actually had to be convinced on the name,” notes Micucci, “but now I really like it.”

Indeed, John Oates is a fan. “He’s actually a great supporter of ours,” Micucci says. “He’s so sweet and he totally gets the joke. But we haven’t heard from Art Garfunkel.”