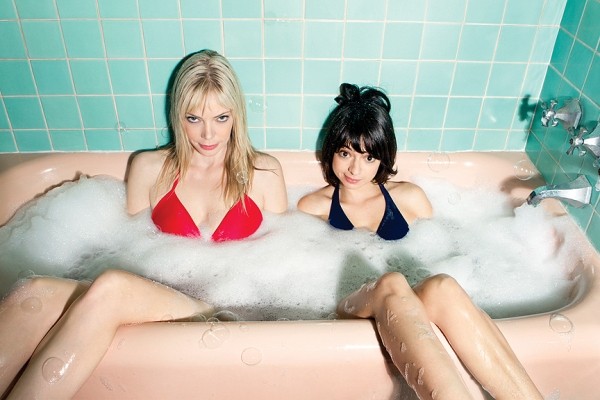 Taking their name from two of music history’s most famous “second bananas,” Los Angeles’ Garfunkel & Oates sing about everything from politics to sex, bringing a witty and hilarious perspective to all of life’s little mishaps.

And while all this free-spirited funny business might not be grandmother- friendly, it’s working for Garfunkel & Oates pretty darned well. Their newest album, Slippery When Moist, was just released Feb. 21, and they recently performed at the Independent Spirit Awards on Feb. 25 with a tongue-in-cheek medley about the featured films. In January, the two signed with HBO to produce their own show, something else they share with their New Zealand counterparts.

While similar in scheme to Flight of the Conchords, the show promises to be very much their own creation. “I think [FOTC] is brilliant and amazing, and to be compared to them is flattering in every way. But our show is more girly and a lot more dirty and raunchy,” Micucci says.

Indeed, when it comes to performing and writing music, these ladies let it fly, which sometimes ends up rubbing audiences the wrong way. “We’re definitely not everybody’s cup of tea,” Micucci says, “[But] we understand when people don’t get it.” If anything, the two just laugh it off, and negative comments become more funny fodder. Lindhome’s personal favorite out of the insults they’ve received is “These bitches is retarded,” a sentence in which the grammar alone is laughable.

Not only do they maintain a lighthearted resistance to negative feedback, but Garfunkel & Oates also effortlessly exist in the tricky gray area between music and comedy. “Kate gravitates more toward the music side, and I gravitate more to comedy,” Lindhome explains. Because of the nature of their music, the two often enjoy playing in comedy clubs more than music venues, where they don’t have to censor what they sing. Micucci is often on keyboard or ukelele while Lindhome plays guitar, and both join in on the vocals. “We balance each other out really well,” Micucci says.

Garfunkel & Oates were a little apprehensive when they first came to Salt Lake City in 2011. “We had a blast,” Micucci says. “We were a little concerned; like, is the audience going to be really conservative? But they were just like any other audience, and we’re not concerned anymore.”

In fact, they even wrote a song about something that happened to Micucci during her stay in Salt Lake City. “Go Kart Racing” chronicles the surprisingly, shall we say, pleasurable experience that a woman can have in a go-kart. As Lindhome describes it: “It seemed like a lot of women knew what we were talking about there, so I don’t know if that’s, like, a thing.” Ladies, the secret is out.Â