Dishonor Code: Despite a 2007 gay-friendly update to BYU’s honor code, some students claim the discipline goes too far. 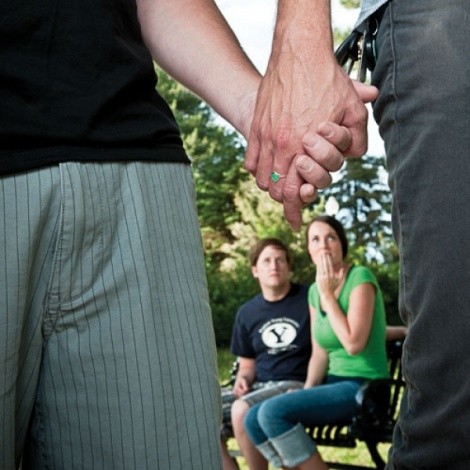 Like many faithful members of The Church of Jesus Christ of Latter-day Saints, John Kovalenko felt a strong desire to attend Brigham Young University. The move to BYU seemed an important step in his spiritual evolution, one that he took with the zeal of a missionary. Unlike many of the church faithful, however, Kovalenko entered BYU as a gay student. He didn’t attend BYU with an expectation that he would change his sexual orientation, but simply with the goal of serving as an emissary to other gay members of the faith, to let them and the world know that his religion and his school would never turn away from gay members who were faithful.

“I was fallaciously trying to live in two worlds at once. Especially after Proposition 8, I wanted to prove everyone wrong,” Kovalenko says of the tensions between the gay community and the LDS Church caused by the church’s lobbying efforts to repeal gay marriage in California in 2008. In his precarious position of being gay and Mormon, Kovalenko intended to change the attitude of his fellow members by staying the same person he always was: committed churchgoer, exemplary student and ambassador for BYU’s music program. As a violinist, Kovalenko helped set up institutional relationships with the prestigious Chautauqua Institution in New York state. He also taught violin to undergrads in the school.

He also fell in love with another man at BYU. That’s how Kovalenko changed—even if BYU didn’t.

“I felt like I was allowed to honor myself and allow myself to experience love when it came into my life,” he says. “I listened to my heart and that’s something I learned, in part, from my religion.”

In 2007, BYU changed its honor code, the policy that regulates student conduct, so that simply being gay would not be prohibited. Acting on those impulses with inappropriate sexual contact, however, would still be prohibited, as would advocating “homosexual behavior.” Kovalenko knew by the time he was called into the Honor Code Office in the summer of 2009 that his commitment to another man would be discussed.

Presented with allegations—but no evidence—of living an unchaste life, Kovalenko, only one credit away from graduation, was offered the opportunity to complete his degree after a year of suspension, which would include frequent visits with an Honor Code Office counselor, essay assignments based on church talks, and agreeing not to associate with any gay individual.

It wasn’t the terms of this honor code arrangement that caused him to walk away from the university, but the rationale they used to find him guilty.

“I decided not to lie in the interview,” Kovalenko says. “But I didn’t verify whether or not my relationship was sexual—I refused to give that information because I didn’t feel that was any of [their] business and I [had] talked to my bishop about it.”

That’s what finally pushed him from BYU. Since he had admitted to being in love with his boyfriend, Kovalenko was told that any contact with him—even a handshake or a hug—would be inappropriate. Any sign of affection would be just as inappropriate as sexual relations and be seen by the honor code as “advocating” for “homosexual behavior.” (Representatives of BYU who handle honor code discipline deny they would make such claims but also refused to comment on Kovalenko’s case, citing the Family Educational Rights & Privacy Act.)

For an institution that purports to encourage “honor,” some students worry that the bureaucracy tasked with enforcing an honor code seems inconsistent and unfair in its approach. They also see an office that is not seeking to foster honor among college students but rather to mass-produce the next generation of conservative, young Mormon professionals.

“It’s so nebulous,” says Ashley Sanders (pictured at left), a former BYU student, about the honor code. “They can use it to enforce whatever they want and to control any behavior.” As a student activist, Sanders and some fellow students were once denied permits to protest the invasion of Iraq in 2003 because “it was against the honor code for us to question our country.”

People can change, but can institutions change without the persistence of the people in them? For a church-owned institution dedicated to preserving family values while struggling to define the role for the members who don’t fit in—especially gay members—BYU seems to have changed little in the way it uses the honor code. Since the turbulent ’60s, when school President Ernest Wilkinson used the honor code to squash rabble-rousers, long hairs and beatniks, BYU has budged little on its policies regarding students who just don’t fit the mold.

The Honor Court
BYU is perhaps Utah’s most well known university. Nestled against the Wasatch Mountains in Provo, the college, named after the Mormon faith’s second prophet, is home to more than 33,000 students. Most students are LDS and flock to the institution known for its prestigious programs, such as its business and law schools. It’s also a school that attracts students seeking to uphold a standard of clean and righteous living, to stand in sober contrast to the typical American college student. According to Steve Baker, director of the Honor Code Office, the code creates a unique culture of academic and spiritual flourishing.

“We also believe students, who honor their commitment to live by the standards they agreed to, do in fact create a very unique environment where service and learning flourish,” Baker writes via e-mail.

The campus is still a typical college setting, with students playing Frisbee on the open grounds or cramming for finals in the library. Except that, inside the library, simple placards next to each check-out booth and info desk read: “Please respect the Honor Code so that we may serve you better.”

But the code is not just a recommendation. While commonly meant for upholding dress and grooming standards, it’s also a way to regulate behavior. Baker says the office interacts with written warnings, meetings and discipline hearings with about 1 to 3 percent of the student body annually. Prior to 2007, those interactions included punishment for gay students who simply admitted to being gay, a policy revisited only after student protests.