Geek Out at the Library 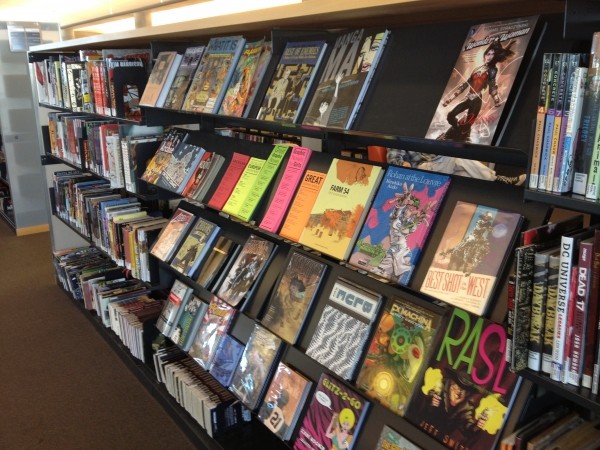 We who live in Salt Lake City are fortunate enough to have one of the most gorgeous library facilities in the world. Our Salt Lake City Main Library isn’t only modern and spacious, it’s also one of the best places in the state for geeks to get an affordable hit of graphic-novel goodness.

Boasting more than 9,000 volumes of comics and graphic novels—more than 15,000 when you count childrens comics and foreign-language editions—the Salt Lake City Main Library’s collection is impressive, wide-ranging and diverse. You’ll find as many classic superhero comics as you will Japanese manga or little-heard-of indie books.

Why would it be so important for a library to have a collection of comics? The answer comes from Donnae Tidwell, the librarian who has been curating the Salt Lake City Main Library graphic-novel collection for a year now. Before taking up her current post, she was a librarian and selector for several different libraries across California and Utah. “A solid graphic-novel collection is important to any library,” she says, “because not everyone reads the same way. We tend to identify libraries as a place where you find linear, text-based fiction and other information. In reality, they are places to jump from idea to idea, from frame to frame, much like reading a graphic novel.

“There is also a certain degree of visual literacy we need to function in the world, especially with how common computers and other devices are today. Reading graphic novels enhances those skills, which explains why it seems like a high percentage of us who grew up liking comic books and MAD Magazine ended up working in technology.”

Tidwell finds it hard to point to a favorite book in the collection. “That’s tough, because it depends on the day of the week and if the moon is full,” she says. “Right now, I have Angel: Barbary Coast at home, because I’m in a Victorian/steampunk mood after reading the first Soulless manga. In a way, it’s a good thing I can’t decide, because my job is to talk to the people coming into the library about what they like and guiding them to a good book to match.”

Currently, the most widely circulated graphic novels in Salt Lake City are a varied bunch, to match the varied tastes of our citizens. Books featuring Marvel comics’ Deadpool are favorites; mainstays like Batman and Robert Kirkman’s The Walking Dead are checked out often.

A book I’d never heard of that’s high in circulation is Rice Boy. Tidwell describes it as “colorful and surreal, with a punctuation of collage. Rice Boy takes the common story of a naive boy saving the world and places it in a richly built world. Creator Evan Dahm guides the story through interesting twists and intriguing encounters to keep you reading, yet you can relate to Rice Boy’s world so well that you feel like The Hideous Child Tavern is right around the corner.” She’s convinced me it’s something I need to take a closer look at.

That’s the great thing about the library experience: You can sample anything you want and it won’t cost you a penny. You can experiment with manga, read all the great indie comics, and check out any sort of superhero, fantasy or sci-fi comic you can imagine—all under one roof. And if you’re not sure if you’d like something, librarians like Tidwell make it their business to help you find something you like.

If there’s a title you want to read but it’s not available at the library, you can always request it. “We do accept recommendations for purchasing,” Tidwell reminds us, “but I don’t buy anything just because one person asked. One thing I remind people is that I am responsible for public funds. My job is to stretch our tax dollars to be as productive as possible, while keeping a million people happy. It’s not easy, but as Salt Lake City has one of the highest circulation rates of any library in the U.S., we must be doing something right.”

If you haven’t found the nerve to make your way into a comic-book store but still want that taste of comics, there is no better resource than our downtown library.