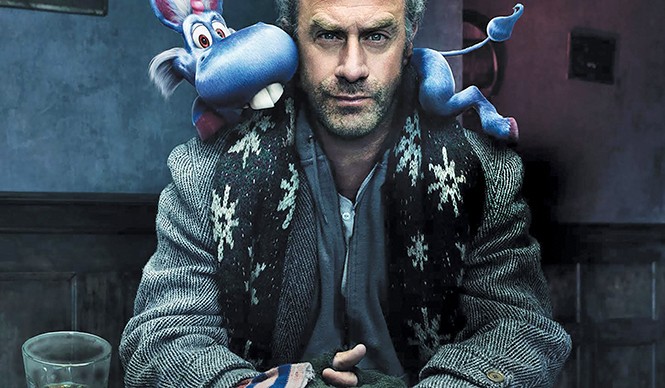 The Only TV Column That Matters™ only needed to hear "from the creators of Crank" to be all-in for Happy! (series debut Wednesday, Dec. 6, Syfy). Based on the Image comic, Happy! follows disgraced ex-cop Nick Sax (Christopher Meloni, killing his old Law & Order: SVU character once and for all), now a druggie fuck-up and assassin for hire. After being gunned down and left for dead, Nick awakens to a cartoon winged unicorn named Happy (voiced by Patton Oswalt) who needs his help in rescuing a little girl who's been kidnapped by Santa Claus. Yep. Insanity, violence and a gonzo-command performance from Meloni ensue. Happy! is too bizarre to last long, so drink it in.

What Vikings did for, well, Vikings, the new, terribly titled Knightfall (series debut Wednesday, Dec. 6, History) hopes to do for the Middle-Ages tale of the Knights Templar. The Knights were warrior monks charged with protecting Christian relics—most notably, the Cup of Christ, aka the Holy Grail, which they of course lost. Knightfall stars the requisite amount of beardy, semi-familiar British actors from period dramas like Downton Abbey, Spartacus and The Tudors, as well as basic-cable swordplay and sex, but it's nowhere near the Vikings 2.0 or Game of Thrones-lite epic it thinks it is. The network's companion videogame, Knightfall: Rivals, is more compelling. Not a good sign.

Shut Eye (Season 2 premiere Wednesday, Dec. 6, Hulu), a dark dramedy about a Los Angeles crime syndicate of gypsy psychics, was one of 2016's more interesting, if overlooked, streaming debuts. Charlie (Jeffrey Donovan, Burn Notice) is a cynical fortune-teller conman desperate to get out of the gypsies' racket and start his own with his wife Linda (KaDee Strickland)—also, thanks to a head trauma, he might really be clairvoyant now. In Season 2, Charlie and Linda are still struggling to get away from the gypsy syndicate, while boss Rita (Isabella Rossellini) is under Fed investigation. Unlike other Hulu shows, all 10 episodes of Shut Eye are dropping at once (a see-the-future gag?).

It was inevitable that Psych: The Movie (Thursday, Dec. 7, USA) would happen because, after all, the series ended three whole years ago—a lifetime in revival years. After eight seasons of wacky crime-solving in Santa Barbara, fake psychic Sean (James Roday) and partner Gus (Dulé Hill) relocated to San Francisco and renamed the business PsychPhrancisco (sure, why not?), but now the gang (Maggie Lawson, Kirsten Nelson, Corbin Bernsen and, to a lesser extent, Tim Omundson) is reunited to bring down another mid-level bad guy. The details matter not; Psych: The Movie is full-tilt comfort-food fan service, and that's not downplayed in the least. Bonus treat: A loving David Bowie tribute, personified by Zachary Levi (Chuck).

I've worked as hard as I can to stop the scourge of stupid that is Fuller House (Season 3 winter premiere Friday, Dec. 22, Netflix), but 'Merica is apparently beyond saving. We're now three—three!—seasons into the most moronic, soul-eating, 9/11-times-1,000 reboot that television has ever excreted, and the second half is dropping right before Christmas! Oh, the laugh-tracked humanity! This column launched in 1998, three years after the blessed demise of the original Full House; since then, I've tried to warn you away from hundreds upon hundreds of shit TV shows. It's like you people aren't even listening to me! Pay attention! I'm brilliant and fascinating! Argh! (Chokes on burrito, turns blue, falls forever silent ...)