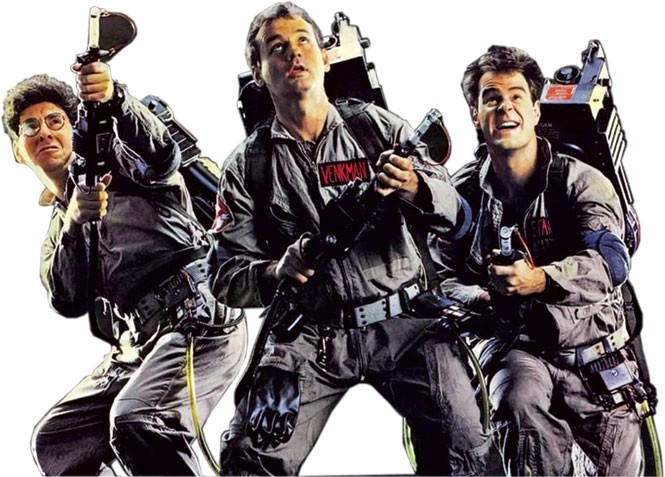 You're forgiven in advance if you roll your eyes at the blatant pandering to nostalgia that is to follow. It is the very nature of nostalgia to feel rich and relevant to those who are cohorts—generationally or otherwise—while it looks merely self-indulgent and irrelevant to those who are not. I was there when my parents' generation American Graffiti'd and Happy Days'd and Big Chill'd itself toward a conviction that its formative youth experience was the formative youth experience. You'd think I'd have learned a thing or two.

But age does things to our relationship with memory, and as Ghostbusters rolls into theaters this weekend for a one-week-only 30th anniversary re-release, it's hard for me not to wax rhapsodic about the cinematic summer of 1984. In a practical sense, it's the reason I'm writing about movies at all.

For, you see, 1984 was the year I got my first real job, at a six-screen multiplex in Bakersfield, Calif., just before the end of my junior year of high school. I didn't choose working in a theater because I was already intensely into movies, like several of my co-workers; it was just one of those jobs a 17-year-old who needed to work around a school schedule could get, and it was better than McDonald's.

I knew when I was hired that free movies at the theater where I'd be working were one of the fringe benefits; I did not know that we had a reciprocal agreement with the other two main first-run theaters in town, which totaled eight additional screens between them. That meant, in effect, I could see for free every movie that opened nationally between April 1984 and June 1985. So I did—and like the obsessive teenager I was, I started logging them on 3x5 index cards (note to confused youngsters: There was a time when people stored information in written form. I know, right?) and eventually wrote reviews for my high-school newspaper

Not only did I see virtually every movie that opened in that time span, but I almost always saw them on opening weekend, generally with a group of my co-workers. And so it was that we slipped into a matinee of Ghostbusters on Sunday, June 10, at one of the theaters where I didn't work—and watched it proceed to blow the roof off the place.

It's hard to convey to those growing up in an era of non-stop pre-release movie coverage what it was like to watch a blockbuster come out of nowhere. Yes, Bill Murray was already something of an established comedy star after Caddyshack and Stripes, and yes, it was a movie with special effects. But summer 1984 was supposed to be about an Indiana Jones sequel and a Star Trek sequel. We didn't know it would be a year where the gravity of a comedy star pulled audiences in—the last year, in fact, where the top two box-office hits of the year (Ghostbusters and Beverly Hills Cop) were both live-action comedies.

I'd be lying if I said Ghostbusters in particular was a defining moment of that movie year. Since it wasn't showing in the theater where I worked, I only saw Ghostbusters a couple of times, as opposed to the dozens of times I made my way into the back of the theater during The Karate Kid to watch an audience erupt during the climactic crane kick, or caught certain key moments of Beverly Hills Cop that left the crowd breathless with laughter.

Even so, I might still find it hard to resist catching Ghostbusters in a theater during this limited run, because on some level I feel certain it's going to take me back to 1984. That was when I discovered not just a love of movies, but a love of going to the movies—sharing in that uniquely transporting communal experience of laughter, fear, anticipation, surprise, awe. I'm not nostalgic for my youth so much as I'm nostalgic for what seems like a different way of watching movies—undistracted by phones, unswayed by a year or more of rumors, casting news and trailers.

Of course, that's the "things were better when I was a kid" trap all nostalgia sells us. Maybe it's enough to remember fondly, and to acknowledge that it's foolish to expect a similar feeling in anyone for whom a certain song, a certain place or a certain movie wasn't part of a defining experience. Whatever may irritate me about the state of moviegoing in 2014, on this weekend I can watch Ghostbusters like it's 1984, when movies felt new.