Land of the Lost: Ghosts of Glen Canyon revisits a submerged world. 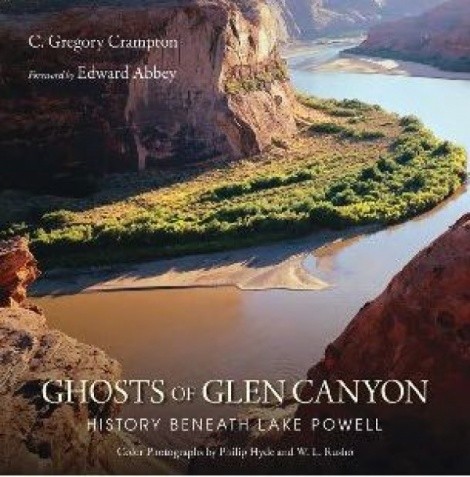 This past summer marked the 40th anniversary of Woodstock, a muddy, water-soaked event that changed the cultural landscape. The recent re-release of Ghosts of Glen Canyon: History Beneath Lake Powell also looks back at a muddy, water-soaked event that occurred in the 1960s that literally changed the landscape of Utah: the construction of Glen Canyon Dam and the creation of Lake Powell. In both cases, to really understand what all the fuss was about and why the world would never be the same: “You had to be there, man.”

C. Gregory Crampton tries to put us “there” in the beautiful place that was the pre-Powell canyon, describing things that may well have been lost forever. Crampton reports on what he saw between 1957-63, when the National Park Service gave him the job of making a record of everything that was about to be submerged. His descriptions are aided by 204 photos of how things looked, including a number of excellent color shots by Philip Hyde and W.L. Rusho. The book, originally released in 1986, has been re-issued with several new “ghost” reports from Crampton, as well as a previously unreleased foreword by renowned environmentalist Edward Abbey.

“Glen Canyon was the most beautiful place I’ve ever seen,” Abbey writes. Clear back in 1986, he predicted that, one day, “The gates of Glen Canyon Dam will be opened, Lake Powell will be drained like dirty water from a tub, and a living river and the sandstone will again be revealed to our eyes.” That may very well end up happening, but not because, as Abbey thought, “a more enlightened, less power-greedy generation will assume management of our society.”

Rather, James Lawrence Powell suggests in his 2009 release, Dead Pool: Lake Powell, Global Warming and the Future of Water in the West that it won’t be a generation of environmentally friendly Abbeyites that kills off Lake Powell, but rather, global warming and increasing amounts of water needed by Western states to service a growing population—a growing population made possible by having plenty of water conveniently stored in a lake. Whatever the reason, the Glen Canyon Institute reports that, since 2005, the lake level has fallen to just 37 percent of capacity, a large enough drop that prompted the release of Resurrection: Glen Canyon and a New Vision for the American West, where author Annette McGivney and photographer James Kay look at how life is bouncing back in areas that are seeing light for the first time in decades.

But whether Lake Powell sticks around or not, Crampton reminds us, “What may not be apparent is that most of the history—the ruins and remains, the sites and all of the visible traces of man’s past—has been lost. The ghosts are underwater.”

Crampton, who died in 1995, provides three different ways to get to know 66 different ghosts in his book. First, there are historic photographs of how things looked. The second way is Crampton’s descriptions of the places, including the stories of the people who experienced them. Third—and perhaps most important in 2009—maps of Lake Powell are provided showing where the historic sites and amazing natural formations were located, now under the water.

Crampton recognizes that while the creation of Lake Powell was a tragedy to those who had been able to hike through Glen Canyon, many people under the age of 50 who grew up in Utah will claim they’ve felt most at home with nature while floating on a boat in Lake Powell and looking at the surrounding scenery. Crampton connects that crowd to the history of the area and keeps the memories of its unique places alive for future generations.

And that’s what makes Crampton a good teller of ghost stories. He tells us about something that is physically long gone, but he is able to bring it back in spirit.