Ghosts of Relationships Past

ON A MAGICAL NIGHT
Chiara Mastroianni
Benjamin Bolay
Camille Cottin
At SLFSatHome.org May 15 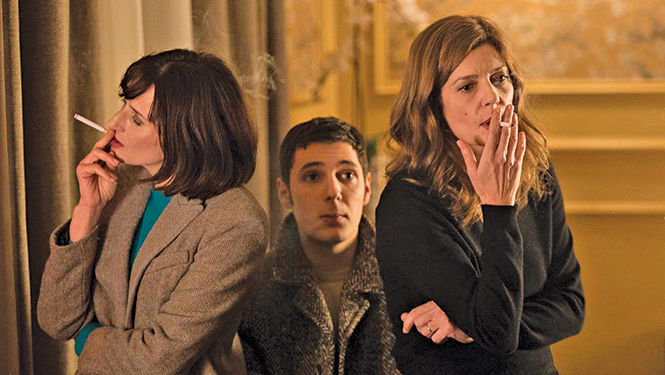 Fantasy needs rules. That might seem counterintuitive, but creating a world where anything can happen doesn't mean just anything can happen. A certain internal logic is needed to tamp down the chaos, to allow for the development of dramatic stakes and thematic resonance. That crazy dream you had last night might be interesting to you, but it's rarely interesting to anyone else, because the story doesn't stick.

Writer/director Christophe Honoré's On a Magical Night applies a fanciful framework to the potentially heartbreaking story of a marriage in crisis. Longtime married couple Maria (Chiara Mastroianni) and Richard (Benjamin Bolay) face their turning point when Richard learns that Maria has been having an affair—and furthermore, that this was just the latest in a long string of affairs, and that she doesn't feel particularly guilty about it. Needing time to clear her head, Maria heads out to stay at the hotel across the street from their Paris apartment, beginning a night of strange and unexpected visitations.

As those visitations begin—with the 23-year-old version of Richard (Vincent Lacoste) appearing in Maria's room—the initial vibe of On a Magical Night is something akin to A Christmas Carol. Maria gets a chance to consider the person she was when she first met her husband 25 years earlier, and how she became the person she is now. Mastroianni has fun with her performance—it's not often that a woman gets to play the inveterate philanderer, let alone one who doesn't understand what the big deal is about marital fidelity—while Honoré crafts memorable moments like Maria and Richard addressing each other from opposite sides of a snowy miniaturized version of their street.

The Dickens parallel quickly breaks down, however, as more apparitions join the party. Along comes Irène (Camille Cottin), Richard's long-ago first love, to share the story of what Richard gave up to marry Maria. But instead of simply becoming a figure to serve Maria's moral self-inquiry, this Irène soon shows a will of her own, heading across the street to see if it's not too late to have a life with Richard. Then Richard himself gets to ponder whether he believes his marriage can, or even should, be salvaged. The serious meditations in the scenes between Irène and the older Richard bump oddly against sequences that feel more like farce, including the abrupt arrival of every one of Maria's previous lovers at the same time.

It's not that On a Magical Night doesn't have some wise things to say about the evolution of a romantic relationship over the years, including the role of nostalgia and the challenge of getting past an infidelity when someone wonders, "How can we talk about anything else now?" Honoré simply sacrifices focus to let his imagination run wild. As charming as his story is in individual moments, the lessons of a dream don't matter without a sense of who needs to learn them in the real world.

Also Opening This Week
Up from the Streets – New Orleans: The City of Music
3 Stars
[SLFSatHome.org, May 15]

There's a fine line between a documentary that strives to be comprehensive and one that ends up feeling overstuffed, and director Michael Murphy manages just to stay on the positive side of that line. Jazz trumpeter and Spike Lee film composer Terence Blanchard narrates an overview of The Big Easy's musical legacy that begins with the city's unique status as a mixing place for French, Spanish, African, Native American and Caribbean cultures, and how the mixture of those cultures' musical traditions gave birth to a peculiarly American art form. Most of what follows involves taking a few minutes each to pay respects to multiple influential figures from New Orleans—Louis Armstrong, Professor Longhair, Fats Domino, Earl King, Allen Toussaint—with commentary by contemporary musicians like Keith Richards, Wynton Marsalis and Harry Connick, Jr. There's not much chance to get into depth about any of them, but when lined up end to end—accompanied by plenty of performances of the amazing songs they left behind—you get a solid lesson in what makes this one place so significant in the history of American music.