Ghosts of Venues Past

A Halloween remembrance of Utah live-music spots that have gone to the other side. 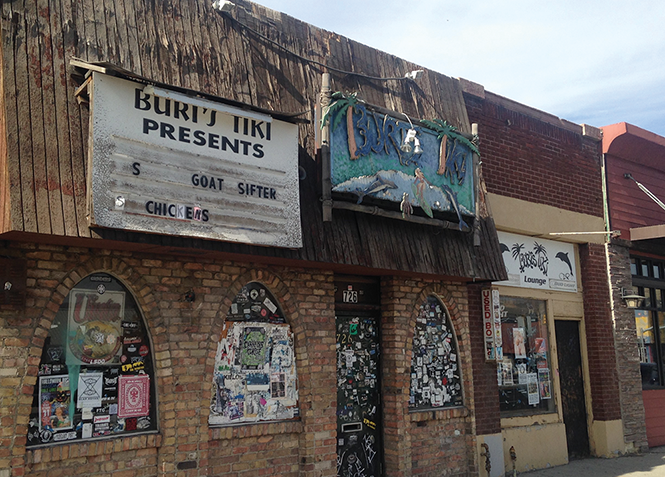 Burt's Tiki Lounge is the first venue I was ever pissed about not being able to go to when I was underage, and I jonesed to follow my older friends to the last dregs of shows there in summer 2014. By that autumn, it would be closed. My friend Skyler Bush, who's been in local bands for years, rolls their eyes at the laments I still express over my eternal FOMO for the deceased place at 726 S. State. "It was the most divey bar ever," they say. The bar, which stank of sewage because of underground pipes, and piss in the maybe-never-cleaned bathrooms, just happened to function as a venue. "It was cozy in a quaint shithole kind of way ... Pretty cool for a place that looked like it could all fall apart at any moment," Bush reminisces. The five-year anniversary of Burt's closing got me thinking about all the other spots that have fallen apart, too, buckling the way things often do in a precariously small music scene.

When Burt's was alive, despite the shithole factor, the sound at shows was still pretty good, a fact owed to long-time local music-maker, David Payne, who set up most of the shows. Despite his own self-described dim memory, Payne recalls many details about the once-thriving place, including shows that first occurred on a small downstairs stage under a low ceiling drooping with palm fronds. "I don't know the reason why it faded ... I think rock 'n' roll died over 10 years or so ago," Payne remarks, sailing right past the bold statement to go on describing the last days of the place. "In the last two years, it was just about empty, a lot of open nights. I was friends with Greg Hogan and Scott Kerbein, who worked there and booked it. I talked them into letting me have empty nights, to practice Jazz Jagz and Red Bennies—which was taboo, to exploit an empty night like that."

Anyone who's been to Twilite Lounge knows that the Jazz Jags lives on there—with Payne as the central, original figure—as does the drink imbibed at Burt's, the "cerebral assassin," a potion made with Old Crow, a flavor shot of Jagermeister and Red Lion Energy Drink. At Twilite, it's just well whiskey, Jager and Red Bull.

Payne was also around during the days of DV8, a three-story music venue across from the Salt Palace at 60 E. South Temple that opened in 1989. It was shut down in 2004 for fire code violations and in 2008, sadly but ever-so-fittingly, burned to the ground in a massive four-alarm fire. Before its demise, the venue functioned savvily as an all-ages space, with a mezzanine for 21-plus folks to drink alcohol. It's a setup that Payne describes as looking similar to The Depot, but "smaller and mangier." It hosted every big name '90s rocker you can think of: P.J. Harvey, Green Day, Pearl Jam, etc. But Payne most often found himself in the "Dracula's castle"-esque basement where the local shows took place, among spiders and spare concrete.

Meanwhile, upstairs, other locals like Greg Wilson were living out the stuff of teen dreams. Wilson accidentally arrived to a super-secret AFI concert too late, which resulted in him and some friends bumping into (and palling up with) the band themselves in a deserted café next door, while fans rampaged DV8's door outside. The band's drummer, Adam Carson, got the teenagers on the list for the show, which is still one of the best Wilson recalls ever having seen.

Youthful enthusiasm, whether actually embodied by a young person or not, is what made venues ranging in size from DV8 and The Zephyr (301 S. West Temple) to smaller spots like Burt's and other like-minded DIY spots, thrive. The Morroccan, which was a practice space behind Cedars of Lebanon downtown, functioned as a venue for two or three years. It could pack 50 in tight to see local bands like Ether—who practiced there—play with movies projected behind them onto gauze draped from above. This venue—along with other scrappy places—was broken up by cops concerned about the lawlessness of an unofficial all-ages venue. Payne lists off many other such there-and-gone spots: a Provo venue and crashpad called The Warehouse; a punk spot out west called Hate House. Joey Mayes, of local band The Nods, used to run a venue out of a music store in Provo called The Compound, which hosted the likes of Thee Oh Sees and Tacocat, among others.

Friends old and young mentioned somewhere in the neighborhood of 40 music venues when I started asking around about these ghosts of SLC past, from established spots like the goth favorite Confetti Club, to the quite-literally-underground punk shows in the basement of Red Light Books, and from the easy-going class of Monk's House of Jazz to the illicit all-ages romp that was the Speedway Cafe. The dizzying list spans decades, but collectively, it looks like a big loss.

The fact that the Jazz Jags brought the "cerebral assassin" to Twilite from Burt's along with their music is heartening, though. Venues die, and will always die, but music lovers will always find new houses, record stores, bars and whole new venues to move their sets to. That seems to be something we can always rely on.