Whatever "it" is, teenage indie-punk duo Girlpool dwells there 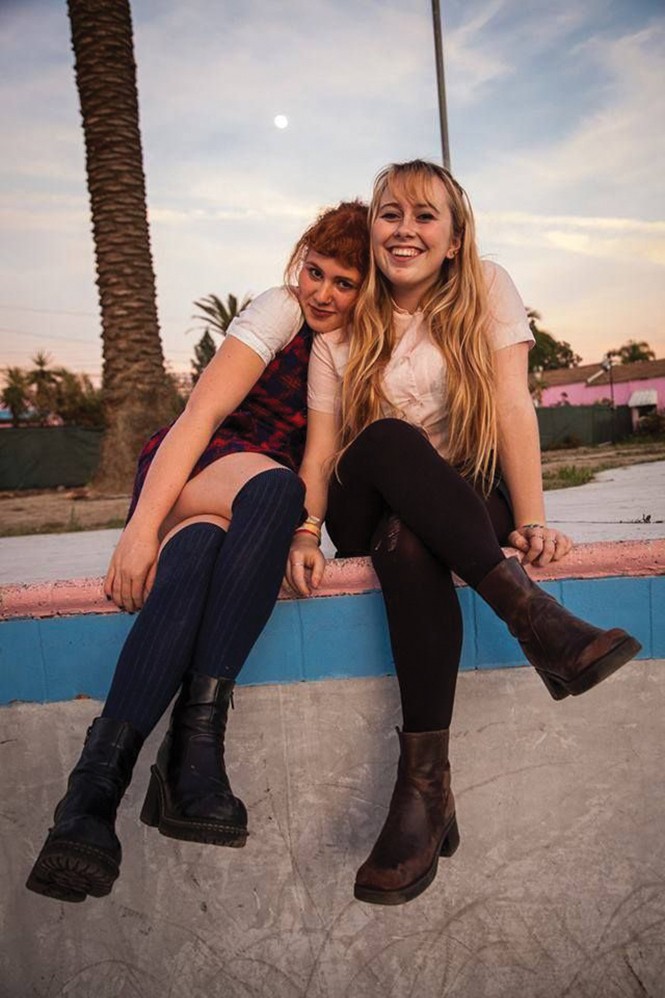 They're called Girlpool, they're an indie-punk duo and they sing unabashedly about sex. This combination—which so often adds up to either a female-empowerment theme, or at least quintessential riot grrrl belligerence—means something new this time. But who the hell knows what? The band doesn't even give it a name.

"We don't really feel comfortable repping anything at all, other than who we are," says Cleo Tucker, one half of the bare bones band. That's not to say that Girlpool espouses a "Be Yourself" movement—or any other movement, for that matter. "We're not a band with an agenda, really. Every feeling we have, we write about. To rep one thing would be limiting for us."

The spare, indie-punk sound, created by two teenage voices (Tucker is 18, and bandmate Harmony Tividad is 19), a guitar and a bass, sounds more like a two-person solo act, with minimal chords and singing half in unison and half in harmony.

Girlpool, now based in Philadelphia, met at a Los Angeles experimental music venue, The Smell. Guitarist Tucker and bass player Tividad (there is no drummer) had each played separately in their own punk groups, which may account for part of the duo's minimalist sound—but they insist it wasn't intentional.

"Nothing is really decided, creatively," Tucker says. "It's kind of always improvisation, natural, organic creation." If there is one unifying theme in the band's existence, it's a "mutual desire to start a project that was focused on sensitivity and vulnerability;" an attempt to "do something extremely collaborative."

Even Girlpool's genre is difficult to pin down on their debut full-length, Before the World Was Big (Wichita Recordings). Depending on the track, their vocal delivery can be mellow or harsh. Rather than employing the trendy female western-pop voice, the two sort of shout-sing, sans vibrato. But on more harmonic tracks—"Pretty," for example, the shout is gone, and they sing softly. They don't sing like they grew up listening to the female pop or country divas that would have been prominent while Tucker and Tividad were young; their voices are more like the unembellished and slightly breathless intonations of Bright Eyes' Conor Oberst (who just happens to be one of Tucker's influences).

So, while the group certainly falls into indie and punk categories, there's more to their music than that, and giving it a name is tough. It's tempting to say, "who the hell knows?" But here's giving it a shot: Essentially, they are a slightly more punk, two-person Elliott Smith, only since there are already two of them, they don't have to double-track their vocals, like he occasionally did, to achieve the same echoed effect.

There is even ambiguity in the cover art for Before the World Was Big. It'd be easy to assume the title refers to childhood. The cover art (by artist and fellow musician Jaxon Demme, who is their friend in Los Angeles) shows two people, a female and a male with features vague enough that their ages are unclear. But the phrase does evoke a longing to be a kid again, pre-responsibility, pre-big world, and Tucker says, "Harmony and I feel so connected to that part of our spirits. That's probably communicated in one way or another."

But that's not really the theme. There isn't one. Girlpool's lyrics hit many points on the maturity spectrum. "American Beauty," from their self-titled EP is (with far less innuendo) about "watching Netflix and chilling" (where "chilling" having equals oral sex). The duo is also reflective and sensitive, as on "Before the World Was Big," when they sing, "Trying not to think of all the ways my mind has changed/ Mom and Dad, I love you, do I show it enough?"

Before the World Was Big encompasses the key paradox of quantum mechanics—not only are they constantly anticipating the next big thing, the "it," as Tucker calls it, they're always in "it." "It" is both the "groove you're in [and] and the next space in your life," says Tucker. "It's always this evolving thing you're reaching for, and you're accepting and understanding, and also accepting that you'll never understand."

That said, they reserve the right not to clearly define themselves—their significance of their music, their lyrics and their album titles may forever remain in flux. "Meaning is a fluctuation of feeling and ... particularly with [Before the World Was Big], it's always changing," says Tucker.