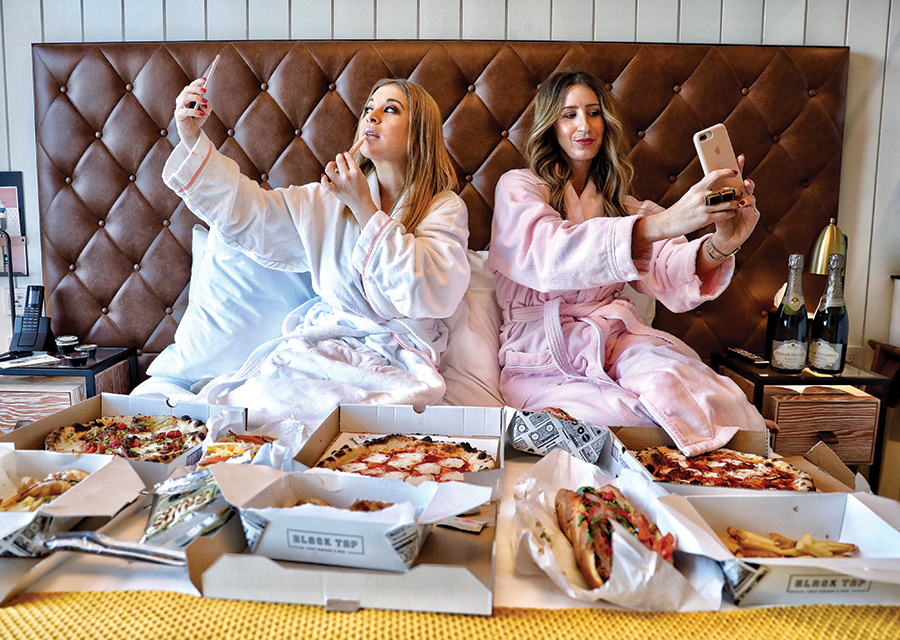 Listening to Ashley Hesseltine and Rayna Greenberg on an episode of their Girls Gotta Eat podcast, as they laugh easily and often about subjects like learning how to orgasm and the pros and cons of 69-ing, it might be easy to think of it as two friends just letting their hair down about all the relationship garbage that drives them crazy. But that wouldn't be giving them enough credit for approaching the iTunes Top 20 Comedy show like consummate professionals.

"A lot of people podcast as hobbies, and that's awesome," Greenberg says. "But from Day 1, we thought a lot about the format, we had a professional photographer take PR pictures. We talked about not just what is our first episode, but what are the first five episodes."

That's a whole lot of commitment for two women who haven't even known each other for two years. Both successful Instagrammers on their own—Greenberg with the food-focused @onehungryjew, Hesseltine with the parody account @brosbeingbasic—the pair met at a social media influencers press event in Aruba in October 2017. "It was a candlelit dinner on the beach with our toes in the sand," Hesseltine says. "We clicked immediately. We came back to New York, and became real-life friends."

That connection also seemed like the perfect fit for an idea Hesseltine had been tossing around for a while: a podcast devoted to issues of sex, dating and relationships for women. With her own stand-up comedy background, Hesseltine knew that in order for the show to match her vision, she would need a partner as adept at comedy as she was. "That was one of the main things that drew me to Rayna, is that she was funny," Hesseltine says. "She had the same mean, petty sense of humor as me when it comes to talking about men."

The journey from that first meeting to Girls Gotta Eat becoming a smash success has been a rapid one, garnering a loyal base of mostly female fans who love Hesseltine and Greenberg's frank discussions of potentially awkward topics. Indeed, where funny women still often struggle to break through in areas like stand-up stages and the writing staffs of late-night talk shows, podcasting has become a place for female-centric comedy to thrive, as the Top 20 Comedy podcasts break down almost 50-50 male and female. Hesseltine agrees that part of that success comes from the fact that there are "zero gatekeepers" for anyone who wants to start a podcast, yet ultimately you've got to deliver content the audiences want. "There's no barrier to entry," Greenberg says, "but that doesn't mean people will come back."

As for the subject matter, both women acknowledge that Sex and the City was a huge influence—and not just because Hesseltine and Greenberg themselves are navigating the life of single women in New York City. "The older we get, the more we live all of those experiences," Hesseltine says. "They [SATC] were absolutely the pioneers of women talking about all of these topics—from vibrators to butt stuff to terrible dates."

And naturally, when you're addressing topics from vibrators to butt stuff to terrible dates, there's the possibility for listeners to be unhappy or uncomfortable—which is just fine as far as they're concerned. "There's always going to be people who don't like something you talk about," Greenberg says. "The more you talk, the more chance there is that you're going to offend someone."

When the GGE women talk, however, they talk about what they know, because that's part of the prepared professionalism they bring to the show. Greenberg notes that planning and putting together each episode involves much more time than the one or two hours they spend recording each week, as they consider their general topic for each episode and the tone that they want for that topic. "If you have a plan, you can deviate from the plan," she says. "Do we want a funny episode, or a serious episode? What's in the news right now? Do we have a guest, or not?"

"We really pride ourselves on not just turning on a microphone and shooting the shit," Hesseltine says. "We like our podcast to really have a purpose. Some comedy podcasts where they are just shooting the shit are great. But we like to be honest about it: We know our topic, we know what we're talking about."

For live shows like their Salt Lake City stop, the approach is somewhat different than for the podcast, with an emphasis on pure hilarity, including audience participation. "The live show is a free-for-all," Hesseltine says. "We want laughs, start to finish."

"We want everyone to walk out thinking, 'What the hell just happened in there?'" Greenberg says. "It's a controlled circus."