The revolution clamoring for homeless resources, in this case, will be livestreamed. 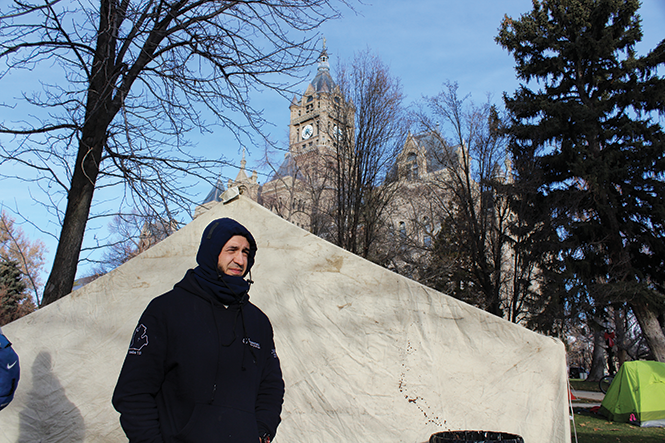 It came in the form of a news release. A group composed by a swath of local community organizers calling itself the Take Shelter Coalition, was taking over a section of downtown's Washington Square Park with a makeshift encampment "in solidarity with our unsheltered neighbors."

The move, dubbed "Operation Take Shelter," was designed as a direct call to action for the city to increase the number of homeless shelter beds available following the closure of the 1,100-bed facility The Road Home, and for an end to so-called cleanups of homeless encampments during which, coalition spokesperson Alex Samuel said "[t]he police steal people's survival belongings. Blankets, sleeping bags, tents, and bikes are all rounded up and placed in trucks headed to the dump."

Labeling the move "unconstitutional," some 80 people set up tents, Occupy-style, on the City and County Building's southwest corner, calling for "a right to the essentials of life" for the city's most vulnerable.

Six hours into the occupation, midday on Friday, Jan. 3, City Weekly reached out to organizers via email to ask how long they thought it would last. The answer was swift: "Until we feel our voices have been heard." By day's end, then-Mayor Jackie Biskupski and Mayor-elect Erin Mendenhall issued a joint statement of their own, saying that an offer to meet with the pair, plus SLCPD Chief Mike Brown, had been ignored. (The group would later refute this.)

"These officials have talking points that they utilize but they really aren't concerned about what's going on ... they dedicate a lot of resources to trying to hide what's going on here." —Marvin Oliveros tweet this

The next evening, an operation featuring a throng of police officers in full riot gear (or as Brown later put it, "personal protective equipment") was launched, resulting in 17 arrests. But before protesters turned over park benches and rounded up tents to form an impromptu fort; before cops charged the grounds to enact a "strategic removal"; before chants of "What do we do when our unsheltered neighbors are under attack? Stand up, fight back!" flooded the midnight air, the mood at the encampment bordered on utopian.

Stapled to a tree at the center of the camp, was a list of guidelines for peaceful living; a sort of founding charter for the small community of organizers. It touched on a host of issues, from substance use to pet policies, disabled accessibility and photography regulations for members of the media.

A variety of amenities were provided at the camp, including breakfast and dinner and tents designated for bathrooms.

At the center of it all, was Marvin Oliveros, who remained steadfast on the group's intent to stay until change was enacted. "We are here today, we'll be here tomorrow, we'll be here until we really get the attention and are able to engage in some real, meaningful, constructive conversation," he told City Weekly.

Oliveros condemned the way city, county and state governments have handled the public image of homelessness, accusing public relations managers of "sticking to the script" and not willing to engage with scrutiny.

"We really want them to become educated," Oliveros said. "These officials have talking points that they utilize but they really aren't concerned about what's going on ... they dedicate a lot of resources to trying to hide what's going on here."

What a Difference 44 Hours Makes
After issuing warnings in-person and later over megaphone, conflict between protesters and SLCPD reached its peak late Saturday when members of SLCPD's public order unit marched into the encampment.

"We have plenty of our friends and relatives here, standing in solidarity," Oliveros said Saturday night, taking over the livestream for upstart community news source, Just Media Utah. "Anybody available to come down, film, stand with us in solidarity, support [and] document what's about to happen, please make your way down here," he clamored.

The streamed raid resulted in the arrest of demonstrators who refused to leave the park after police informed them they were in violation of city ordinance laws preventing camping on public property between the hours of 11 p.m. and 5 a.m. According to The Salt Lake Tribune, Oliveros was among those arrested. He was later released on suspicion of disorderly conduct, failure to disperse and interfering with an arresting officer—all considered misdemeanors.

A Perennial Issue
Activists and community organizers took matters into their own hands last November, during the waning days of The Road Home. Outside the shelter, they laid coats, blankets and boots in rows and piles for whomever needed them, and provided hot chocolate and snacks.

Even with the arrival of three new resource centers, the downtown behemoth left a void of 400 fewer beds. Referencing Lt. Gov. Spencer Cox's recent "call to action" to get landlords to offer housing for homeless persons, Bill Tibbitts, associate director of the Crossroads Urban Center—a local advocacy group and food pantry—told City Weekly at the time that it'd be "hard to see how moving 100 more people into housing in one month is going to reduce the demand the next ... It's a temporary blip. It's not a structural change. It's not a permanent change."

Oliveros said the newly formed coalition sought to initiate conversation about the crisis with Cox, Biskupski and members of the Salt Lake City Council, but their requests were met with "locked doors." So, a new means of communication was devised.

"[The] city council was refusing to engage in conversation ... they went as far as taking a stack of our public comment cards in hopes of silencing some of the concerned community members," Oliveros said. "Whenever we're told to take the proper channels, this is the response we are accustomed to getting from elected officials."

Furthering the problem, Oliveros claimed that since The Road Home's closure, police have ramped up their interactions with homeless communities, which has increased tension, culminating in the group's decision to set up camp.

A Conflicting Narrative
In response, Brown noted during a brief news conference on Sunday that "not one single report of theft" had been reported to the SLCPD. He further emphasized that police officers are instructed to act with compassion toward the homeless, saying that the department has reduced the number of citations issued for illegal camping in 2019 by 38% compared to the previous year.

Speaking on health concerns at the impromptu camps, Nicholas Rupp, Salt Lake County Health Department's PR manager, told City Weekly that the department has been conducting "community cleanups" of homeless encampments for the past 25 years. He said they focus on the collection of "debris that could present a threat to public health, such as drug paraphernalia or items contaminated with bodily fluids."

Rupp added that the department posts cleanup notifications at the sites 24 hours in advance, and will first confirm that beds are available at nearby homeless shelters. (The night of the raid, 74 beds were available, police told Washington Square campers over a megaphone.)

"We are sensitive to the issue of homelessness in our community," Rupp continued. "Overnight camping on public or private property, however, poses significant risks of unsanitary conditions and for the physical safety of both the campers and others."


Still, Oliveros steadfastly calls the cleanups a “cover” for the sake of optics.

Last month, in response to the cut-and-dried policies, ACLU of Utah’s smart justice coordinator, Jason Groth, sent a strongly worded letter to the health department. “The notices aren’t gentle reminders that people need to pick up their litter or it will be thrown away,” Groth wrote, according to the Deseret News. “These items are not trash. They are items needed to survive.”

The Aftermath
The jury is still out on what, if any, the encampment’s impact will be, but one thing is for sure: public servants and the community at-large paid attention.

Following the weekend's events, Civil Riot wrote in a Facebook post that "people were shot with bean bag guns, leaving large bruises," and that at least one was trampled. Brown on the other hand, exalted the men and women on his team "who exercised the greatest restraint. Who demonstrated outstanding decorum and who are constant professionals day-in and day-out," during his department's news briefing.

"Do your job," Oliveros said of government officials' hot takes. "These officials are elected officials, they're elected to take care of all of us, not just some of us."

Three days later, during Mendenhall's swearing-in, a few hundred feet from where Oliveros was detained, the newly elected mayor addressed homelessness concerns. "We all want the same solution, which is that no one is turned away from shelter when they seek shelter, particularly during these winter months," she said.

Standing in silent protest, Taunra Johnson stood out from the cheering crowd. She told City Weekly one of her cousins had been in the recently cleared encampment, and hoped that after Mendenhall's ceremony, she and the city council members present would open the mic for a question-and-answer panel. "One question that I would have for them is, 'Are you so far detached from humanity, that you can't see the humanity in these people?'" (A Q&A session was not part of the day's official program.)

"It's amazing to me," Johnson continued. "I just walked through the library, and I come here, and they have these propane heaters and free cider for everyone but on the other side of the square, there's people freezing."


With information from Enrique Limón.